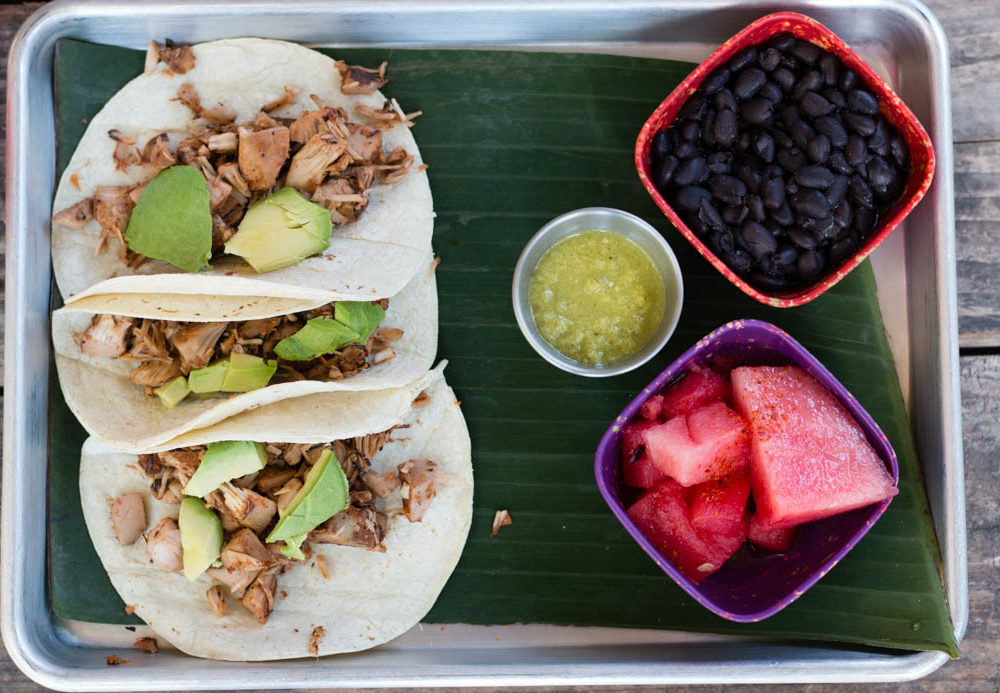 I’m learning to love vegetables—it’s a matter of self-preservation. Gone are the days where I can dine on a weekly rotation consisting primarily of cheese enchiladas with chili con carne, puffy tacos, hamburgers and breakfast tacos without impact. In fact, I’ve made an effort to maximize my intake of veggies and minimize the number of heavy meals—though I’m certain they never will go away. Fortunately, vegetables don’t have to be boring, as La Botánica can attest.

I wrote about this vegan eatery kickstarted by Rebel Mariposa over a year ago, but I only recently was able to make it in for Sunday morning brunch. Having a two-year old decreases dining out opportunities, and I often fall back on old favorites when an opportunity exists. But what instigated a trip to La Botánica was that my vegetarian sister-in-law was in town to visit a couple of new babies (her sister’s baby girl and our new baby boy).

The day was nice, so we sat outside on their covered patio with plenty of fans blowing. The wall of old baking tins that you can see driving along St. Mary’s are abled to be propped up, allowing a nice breeze to blow in. The outdoor bar is expansive, with a wide selection of craft beer and liquor. The chalkboard showed reasonably priced $5/$6 cocktails, but I passed on one because my sister-in-law is pregnant. I knew I’d make her jealous going with a boozy morning drink, so I ordered a grapefruit juice and she had a fresh made limonada—both came with free refills.

The first item listed on their Sunday menu was a vegetarian version of barbacoa tacos. Since barbacoa is a San Antonio Sunday morning tradition, I thought I would give this version made with jackfruit a try. (Side note: I had no clue what jackfruit is until I looked it up on Wikipedia for this article.) The “faux-bacoa” tacos came with corn tortillas, black beans, spicy green salsa and a side of watermelon with chili powder.

The tortillas were exceptional as was the green salsa. And in spite of being a meat eater, I loved their vegan barbacoa tacos—the spices were very similar used to a traditional barbacoa plate and recalled past Sunday morning memories of the meat variety.

However, you should know that the faux-bacoa tacos aren’t an exact duplicate of traditional barbacoa tacos for one main reason: the texture. Let’s be clear: jackfruit is a vegetable and can’t exactly replicate that same texture of shredded barbacoa. But once I got over that fact, I appreciated how balanced and wonderful of a taco this was.

This is not a complaint against La Botánica, but rather against meat descriptions at all vegetarian/vegan restaurants—the texture is never right. It’s understandable that these restaurants use their meat counterparts to help provide a reference point for us carnivores. However, that sets up a false expectation. It’s like being told you’re being served a Coke but at first taste you notice it’s a Dr. Pepper. The drink tastes funny because of the expectation that was set. It’s nothing against Dr. Pepper—in fact most love that soda—instead, it’s everything to do with the fact that your mind was set on a Coke. But I digress.

My sister-in-law ordered the La Vaquera, a plate with tempeh sausage and potatoes that came with a side of black beans and red salsa that was more sweet than spicy. The plate was good, but for my money I’d go with the barbacoa tacos hands down.

San Antonians take pride in our breakfast tacos and with good reason: they’re simply the best. While I love all things meat and manteca and don’t plan on becoming a vegetarian anytime soon, La Botánica has added to our breakfast taco repertoire with their vegan eats. You just have to be open-minded to give them a try.