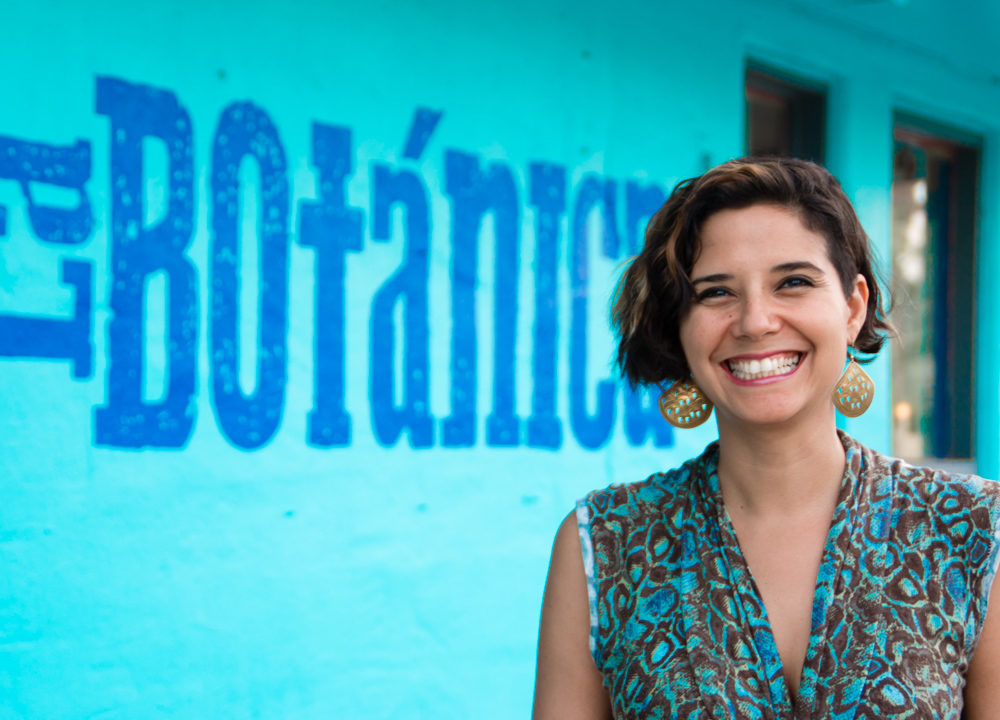 If you’ve followed SA Flavor for any amount of time, you could probably guess that I am not a vegetarian, much less a vegan. But in spite of my love of all things meat, I’m also open vegetable only dishes—we can all stand to eat more leafy greens in our diet. So when I came across a Kickstarter campaign to raise money for a vegan restaurant called La Botánica on the St. Mary’s Strip, I was happy to support it.

The campaign was created by Rebecca Lopez, known as Rebel Mariposa, who is the woman behind the vegan collective Rebel Eats. She envisions La Botánica to not just be a vegan restaurant, but also an educational resource for folks unfamiliar with cultivating vegetables (she plans to have multiple raised-bed gardens) and how to prepare them.

“We all know how to cook meat, but when you go to try to not cook meat [many folks] think all they can do is a salad,” Mariposa says.

From Rebecca to Rebel

Born in South Texas and originally a meat-eater, Mariposa’s journey to become a vegan took the long, windy road. In a process that spanned seven years, she navigated from meat-eater, to pescaterian, vegetarian and ultimately vegan. While living in San Diego, she cooked with True Kitchen Creatives and learned how to prepare vegan and raw vegan fare from Chef Joseph Aguirre.

It was also in San Diego where “Rebecca” gave way to “Rebel” when she had to create an on-air DJ name for a radio show. Mariposa was inspired by one of the communiqués published by the Zappatista’s, a modern day revolutionary group in the Mexican state of Chiapas, which had the following lines:

And there are butterflies, like rebellions, of all colors.

And the task of butterflies, as any respectable encyclopedia will tell you, is to bring the rainbow down closer so children can learn to fly.

Those words resonated with her and Rebel Mariposa (the Spanish word for “butterfly”) was born.

Getting Funding on Kickstarter

Upon returning to her hometown, she took the knowledge she gained from True Kitchen Creatives and applied it in her local vegan collective Rebel Eats. But Mariposa wanted to create a brick and mortar restaurant to serve the community. After hitting walls to gain funding from traditional sources like a bank, she turned to Kickstarter at the encouragement of her friends to find a more permanent home for her vegan cooking in La Botánica.

I stumbled on Mariposa’s Kickstarter campaign when it was halfway to its goal of $10,000. Since that time, she has gone on to raise over $11,000 with several days remaining. But additional support from the community is still welcome—and you can score some pretty cool rewards—so check out the Kickstarter page and back this project now.

One piece of advice that Mariposa would give to a San Antonian with an aspiring Kickstarter campaign is to turn to their friends for help.

“Don’t do it on your own. Get as many people around you who have knowledge, whether they’re ‘experts’ or not,” Mariposa offers. “Someone who is a photographer. Someone who has done videography. Someone who is a good writer. Use your friends and community to help you and support you. Ask for help from who you know and trust and feel comfortable with.”

Mariposa believes that La Botánica is not necessarily about wanting to make food or owning a restaurant. Instead, she says that she enjoys, “bringing vegetables back into our diets and to neighborhoods to people of color where it isn’t as accessible.”

San Antonio will never have the amount of vegans as a Californian city. Though there is something brewing in the local scene with the proliferation of restaurants like Green and Señor Veggie. Mariposa attributes these new restaurant openings to a desire for people to want healthier options with more vegetables.

“We have a health craze in a sense. I live by Woodlawn Lake and I see it,” Mariposa observes.” Every season more and more people are out there walking, doing laps that you wouldn’t have seen five years ago. There’s just this revival of people wanting to be active and healthy and so people want those [healthy] options when they go out to eat.” She plans filling this niche with La Botánica—even as an unabashed lover of beef fajitas and burgers, I couldn’t agree more.

What I found so inviting is how Mariposa doesn’t judge people based on their eating preferences, but truly has a desire to expose people to more vegetables. Her location on the St. Mary’s Strip is validation of that aspiration, as vegan cuisine will be made accessible to late-night diners looking for grub after a concert or a night out at the bar.

Mariposa gladly invites die-hard carnivores to give her restaurant a try—even though the food might look a little different than they’re used to. “Once you know how to play on our taste buds and what we crave and you can turn around and make that from something that’s just vegetables,” she says. “If you like good food, if you like flavor, come on in. I feel you will be satisfied, you will enjoy your meal and it will be a good experience.”

While I don’t look to give up burgers, barbacoa or brats anytime soon, you’ll definitely find this guy giving La Botánica a try.

Be sure to support Rebel’s Kickstarter now!