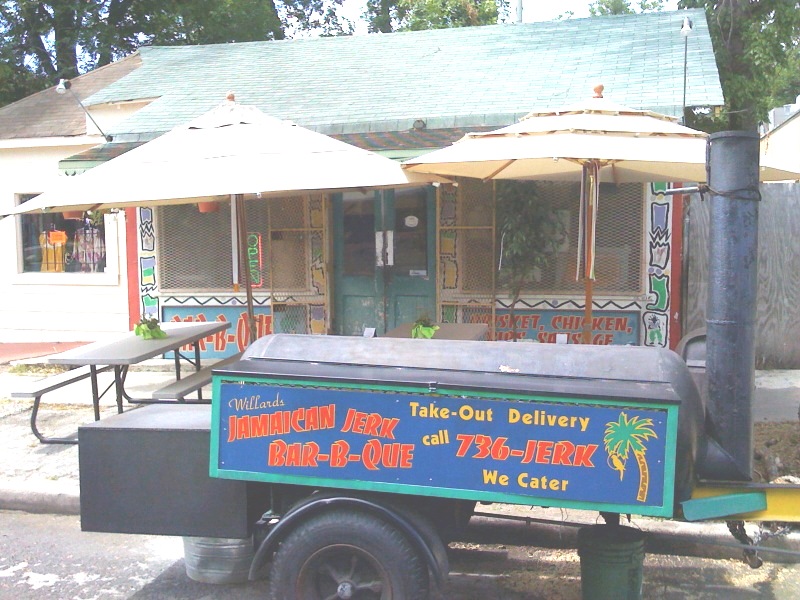 Hidden off of the St. Mary’s Strip is Willard’s Jamaican Jerk BBQ which the owner, cashier, cook, server, and operator are all the same person. Driving down Mistletoe Street, you might miss it if you blink; the restaurant is tucked between a shop and Carmen’s de la Calle, but just look for the smoker out front.

I went to the restaurant with a couple of friends and upon walking up to the restaurant you get hit with that BBQ smell of smoked meat. It is one of the best smells in the world, and is the litmus test of all great BBQ restaurants. Willard was behind the counter, and the man was very outgoing. He engaged us from the moment that we came in, and told us all kinds of stories about how he was a personal chef for two of San Antonio’s great families – the Holts and the Midcaps. Willard is quite the talker and full of stories.

When I found out that he had pork ribs, I knew what I had to get; having lived in Memphis for a summer, I was educated on the positives of pork and always seek that out. I decided to get ½ pound of pork ribs, potato salad, and beans. Additionally, since this was not one of the specials so I was also going to have to pay extra for BBQ sauce (more on this in a moment) so I was going to be out about $7.50; there were specials for brisket and sausage that would be in the $6 range that included the two sides and sauce.

Willard came out with three of his concoctions and set down a napkin and poured a dab of each of the sauces down and asked me to taste them as he described their qualities. Being a fan of more traditional BBQ sauce, I opted for that one, but I really liked the kick of the hot sauce. Not really thinking it through, I asked him if I could have a container with the hot and BBQ mixed; that was a mistake because Willard prides himself on creating the sauces and said, “Well, I could do it this once, but then everyone will come in and start customizing their sauces and this and that.” I told him that I understood, and just opted for the BBQ sauce.

We paid for the order, and as he gave us the receipt he said, “Now, I do guarantee my food and here is the guarantee – if you don’t like what you eat, then bring back the receipt. You will get your money back, but you are never allowed to come back.” At this moment, I knew this was going to be good.

After paying for our order, it took quite a while to get the food. If you go there, don’t be in a hurry, you will only frustrate yourself. The one friend who had been before and also to an event that Willard catered told of how methodical he is with the preparation. He makes sure there is exactly the right quantity of meat, sides, and sauce and painstakingly measures to ensure this.

The ribs were absolutely amazing and made me recall living in Memphis. They were really moist and had a nice smoky flavor (I believe that Willard mentioned he smoked them for 28 hours); the BBQ sauce complimented the meat nicely, but didn’t overpower the flavor of the meat. The beans were delicious, but I would have liked to have added a little bit of salt to them. The potato salad was interesting but something that I didn’t care for; it was just a different tasting potato salad than what I am used to and will pass on it next time. But those ribs… oh my goodness… they have to be some of the best bones in the state; I am really looking forward to taking my friends to this restaurant whenever they come to visit me.

While I definitely recommend you check out Willard’s, I was to summarize the things that you need to know before you go:
(1) Be sure to interact with Willard and hear his stories.
(2) Don’t be in a hurry – talking with Willard can take 10-15 before you order and the food takes a while to come out.
(3) Be sure to call ahead, 210.736.5375, because if he has a catering gig the restaurant will be closed.
(4) Don’t ask to mix sauces.

Value: 9/10 (if you opt for the special, you can get a dang good deal considering how much time it takes to prepare and the flavor of the food)
Atmosphere: 10/10 (total dive with pictures of family and patrons all around the inside; I completely love it)
Service: 10/10 (I love the service, because I really felt that I got to connect with the person who prepared the food; other people might not like the fact that it takes a long time)
Taste: 9/10 (The meat was amazing; the sides were good)
View Larger Map