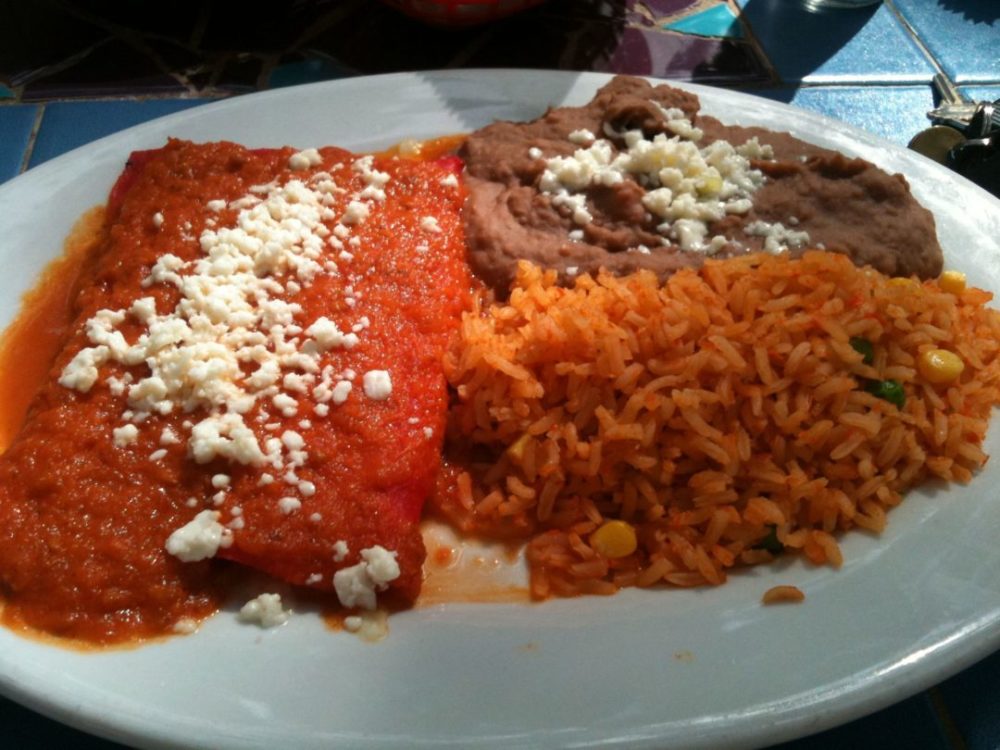 Even though I have been in San Antonio for five and a half years now, there are still a few restaurants considered by many as staples of the Alamo City that I have yet to visit.  One of those restaurants is La Fonda on Main.

Operating on Main Street since 1930, La Fonda has been the go to place for many San Antonians, visiting actors (Gary Cooper, John Wayne), generals (Eisenhower, McArthur), and sitting presidents (FDR, LBJ).  As you can see, the restaurant is steeped in history.  I decided to go snag lunch there earlier this week with a friend.

Right off the bat, I was blown away by the atmosphere.  You feel like you are eating in a place that has a history, and since the weather was nice, we decided to go eat out on the patio next to a huge oak tree (I am guessing that it has to be over a hundred years old!).  One thing to be aware of (especially if you are not from San Antonio), this is the time where all our Live Oaks drop their acorns and this big tree has its fair share of them!

The service was great and we were promptly greeted by our waitress.  I started out with Steve’s Margarita, and the waitress forewarned me that it is essentially tequila and lime juice and is really tart.  This is my type of margarita.  I don’t know what tequila they used, but it did have a good, tart, refreshing taste (and packed a punch).  I think it misses a little something by not having an orange liquor, but it was good none-the-less.

Think about a time when you you ordered a Dr. Pepper but got a Coke instead; Coke isn’t necessarily bad but it wasn’t what you were looking for.  Overall the main dish was really good, however, I confess that it was not what I expected.  The enchiladas with the tomato sauce actually seemed like a Mexican take on manicotti with the tortillas subbing in for the pasta.  Since it is not what I was expecting, I am going to withhold my rating until another visit where I try something more in line with the Tex Mex that I love.

My friend ordered the La Fonda Special Plate and when I saw it I was immediately jealous.  It had every Tex Mex dish on it that you could imagine, even a nice tamale with guisada gravy.  I’ll tell you what, I KNOW what I am going to order the next time I return!

So I guess the jury is still out for me on La Fonda on Main.  I think that it is a restaurant that I could love, but I definitely have to get out there again and order a different dish.

Value: 7/10 (it is a little pricey for lunch (the La Fonda Special Plate is $12))
Atmosphere: 10/10 (awesome atmosphere with a lot of history; the patio has to be one of the best in town)
Service: 9/10 (great service that was incredibly fast and friendly (one of the little old ladies called me “handsome” completely out of the blue as I was leaving; flattery is worth something as far as I’m concerned!))
Salsa: 6/10 (I will say that I was a little disappointed in the salsa; it was fresh but it seemed like it was missing something; while adding a little salt will bring out the flavors, it is not spicy at all)
Taste: ???/10 (going to have to go back to get another plate; if you are in town for some Tex Mex, you would be best to avoid the Enchiladas Rojas de Queso as it tastes more Italian than Mexican to me)
Website: www.lafondaonmain.com/
View Larger Map