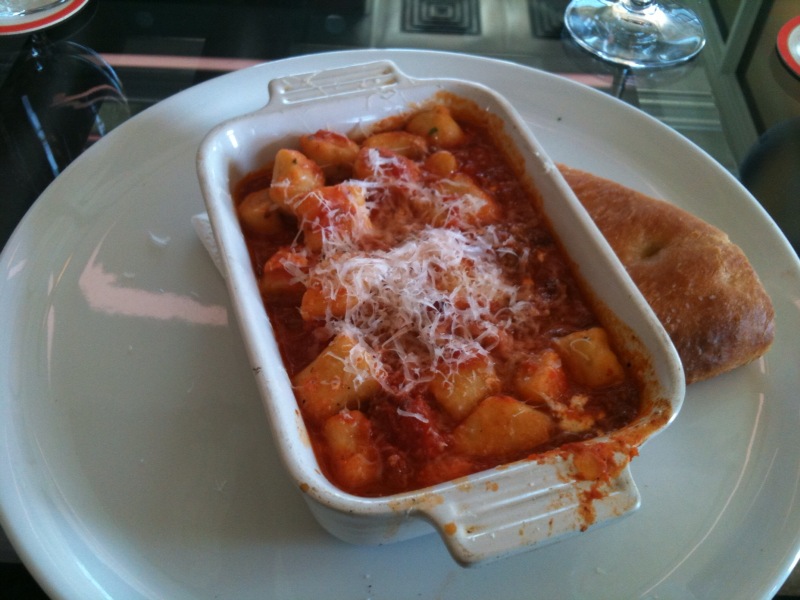 So the tagline of this website states that I’m just an Average Joe in San Antonio, which is quite true.  For all these reviews, I have been paying to eat the food out of pocket which means that I am fairly cost conscious in everything that I order.  But sometimes you might be looking for a special meal; a meal that you are willing to spend above what you normally spend.  To close out 2009, I decided to snag a meal over at the recently opened Il Sogno located in the renovated Pearl Brewery.

This restaurant has been receiving rave reviews, but one thing to know before you go is that they DO NOT accept reservations.  You basically show up and it is first come first serve.  One of my compadres who went at an earlier time told me that they do have seating at the bar that is always open.  Another advantage to immediate seating is the fact that you can also see the folks preparing your food and you can interact with them.

I had the afternoon off so I decided to go get lunch.  I pulled in and it was already getting packed; I could tell that this restaurant was obviously a new darling on the San Antonio food scene.

Let me talk about the service for a moment.  You should be able to tell from the context clues that this restaurant was going to be expensive.  I would therefore expect the type of service to accompany this price tag.  I have to admit that I was less than thrilled with the service I got.  It could have been that I looked like an “average Joe” or the fact that I was by myself, but I got pretty lousy service.

First off, I asked a waitress if the bar was open seating and she told me “No, it is reserved.”  I thought, ok, I will just wait.  I ended up waiting a long time before the maitre d’ came by and I had the opportunity to ask him.  He informed me that obviously the bar is open and that I could sit there if I liked and promptly walked away before I could explain what the waitress told me.

The first waiter asked if I would like wine, and I said yes, and he brought me the wine list.  I waited probably ten minutes until he came back with a bottle of the cheap house wine.  I reminded him that I had not ordered wine yet, and actually asked for an expensive glass of wine.  One thing I hate more than anything is to be type cast as a cheap skate/punk single kid because I like to order nice things and am actually quite generous with my tips because I recognize the fact that I am by myself.  This really put me off.  It was further exasperated by the fact that it took forever for me to get any type of service and the fact that no one would bring me my check, nor take it away when I provided payment.

Let me stop being negative about the service, because other than that, I really enjoyed my meal.  First, sitting at the chef’s bar was really cool.  I got to see how all the food was prepared and got to talk with the salad/dessert chef.  He was extremely nice and even though he was kind of quiet, told me a lot about the food he was preparing.  He also offered some pretty good suggestions and was incredibly friendly.  Thankfully he was this helpful because he alone redeemed the entire lousy service of the wait staff.

I ended up ordering the gnocchi alla caprese as my mine course along with a glass of wine.  While waiting for the food, it was fun to see the head chef interacting with his kitchen.  He would go through the orders and prioritize them the best way he could deem fit.  Everything was created fresh and made to order, so he was in a sense the manager of a small factory.  Being an industrial engineer, I really appreciated his skill and how he was adept at getting the maximum efficiency out of his kitchen.  You could often hear him say, “I need a [fill in the entrée] any time now,” with the other guys saying, “Yes chef, coming right up.”  It was really cool seeing this dynamic.

My food came out and was really tasty.  The sauce had a very fresh taste and you could tell that it was made the same day.  The gnocchi was far superior to the prepackaged type that I have bought and tried to cook; it was very tender and didn’t taste rubbery at all.  It was really a nice warm meal and would work well for a cold day.

I talked with the chef who made the desserts to ask him what he would suggest between the Nutella tart and the tiramisu, and he advised to get the tiramisu.  He told me that it is really light and finishes clean because of a certain way that they prepare it.  I decided to take his advice and ordered that along with an espresso (oh yeah, another service fail that I forgot, they made my espresso and just left it sitting over by the coffee maker; after watching it sit there for like 10 minutes I finally flagged down a waiter to ask if that was mine).  Boy was this guy on the mark; the tiramisu was the best that I have ever had.  His description was spot on in that it was very light and left your pallet clean, but boy it was really rich.  I think it would be worth going here just for dessert (assuming they deliver your coffee promptly…).

Overall, if you are looking for a special night out, I think that this would be a pretty good restaurant.  The food was worth every penny; sometimes quality food comes at a higher price and these are one of those times.  I know that I have panned the service pretty bad, and it quite possibly could be that it was because the head guy thought that I was a punk kid that wasn’t going to pay a whole lot.  Personally, I hate people like this, but I imagine that if you go as a couple and a little more dressed up than I was (though I was in a buttoned down shirt and jeans) you will probably get better service.  However, if this is their standard of service, I do not think that they will be in business much longer because their prices warrant you being treated nice.

Value: 8.5/10 (I spent $45 on my lunch for a main course , dessert, espresso, glass of wine, and tip; the food was really worth it though with all the fresh ingredients, but the service was not)
Atmosphere: 9.5/10 (trendy new spot in town; the place to see and be seen)
Service: 3/10 (pathetic to put it mildly; I was treated terribly as if I wasn’t going to give a good tip; I think that the chef/owner should really evaluate his maitre d’ to see if he is the right person – the staff pretty much picks up all his tendencies.  It is pretty bad when the chef making the salads and desserts is the one person who was the big bright spot in service.)
Taste: 9/10 (Would have been a 10, but the service left a bad aftertaste in my mouth…)
View Larger Map