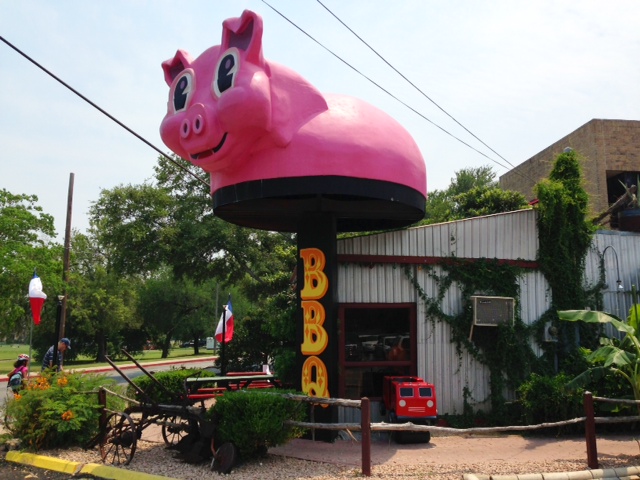 This article first appeared in the Hills and Heights Magazine

If you are taking the kids to the zoo this summer, you are going to want to stop by Augie’s Barbed Wire Smokehouse. Located right by the Sunken Garden Theater on North Saint Mary’s (look for the giant pink pig), Augie’s offers a real deal smokehouse atmosphere where you can get a variety of meat before it runs out.

The interior of Augie’s makes it feel as if the restaurant has been there for the past 50 years, thought it has only been around since 2000. Your eyes are going to have to adjust as you walk into the small entrance into a dark interior where they are cutting the meat to order. Old beer signs, license plates and Texas ephemera cover the walls, and there is a sizable beer selection to wet your whistle.

If you are at Augie’s and looking for a cool treat, check out SA Pops for a paleta!

Wanting to try the pulled pork (but having been burned at Texas BBQ joints that serve the dish), I opted for a three meat combo plate that included it along with jalapeño sausage and brisket. My sides were pinto beans and mac ‘n’ cheese and I washed it down with a Shiner beer.

I ate outside at a picnic table under a large metal roof – think an open-air barn – that has a couple of holes for the tree to pass through the roof. There was a stage, as well as a screen, and I imagine that this would be a pretty good spot to catch a band or football game. Across the way there was a birthday party and close to me was a family that had gathered after a graduation. Kids were running around and I imagine that Augie’s is a place that many parents stop by after the zoo to let their children loose while they enjoy a brew.

My first bite into the pulled pork was a little dry, but quickly redeemed itself when I got halfway through the dish. Pulled pork is a hard dish to find in Texas, and while Augie’s was pretty good, you might be better off getting a different meat for your plate. The jalapeño sausage was particularly good. I got a whole link and there were tons of diced peppers throughout giving it a good heat.

The brisket, however, stole the show. The meat was incredibly tender and had a nice smoky taste. The cook trimmed the meat perfectly, leaving just a little bit of gristle to add to the taste. Served alongside the pinto beans and a cold beer, you couldn’t ask for a better afternoon lunch.

UPDATED since printed in the magazine – during the NBA Finals, I had a blast watching a couple of Spurs games at Augie’s. While I could have had a better result for the games, I enjoyed the huge projection TV and terrific beer specials.