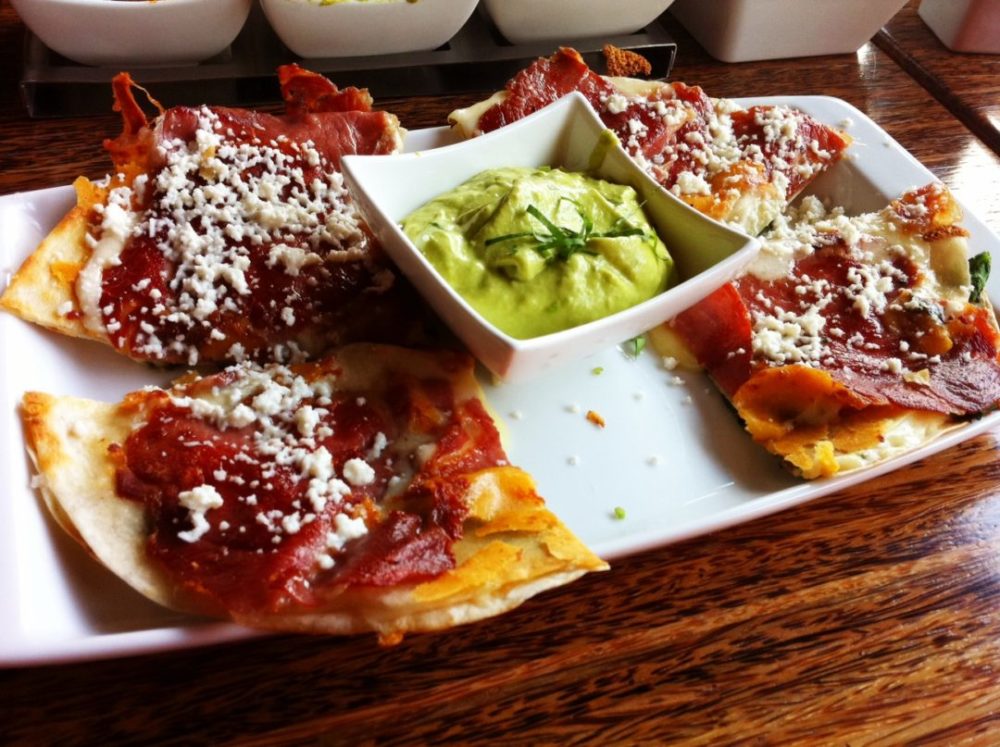 Situated in the recently developed “city center” portion of the Alamo Quarry, Urban Taco presents an interesting take on traditional Mexican food. I have heard good things from friends and coworkers about this restaurant, but was reticent to go because of one thing: you had to pay for your chips and salsa. This was a major hangup that took me a while to get over.  I could not believe that there would be a Mexican restaurant in town that would require payment for the pr-meal staple. Finally one of my friends convinced me to stop by the restaurant with them for lunch.

Walking into the restaurant for lunch, I was impressed by the smart decor. The space has a fresh and light feeling; Urban Taco feels more like a chic restaurant in LA than one in San Antonio. The bar is well stocked and I can imagine that this is quite the hotspot at night.

Our server was wonderful; she was bubbly without being oppressively happy and good at making conversation. In fact, the entire staff seemed top notch and quick on the draw with drink refills and checking on their tables. This attention to detail further complemented the atmosphere.

My friend insisted on picking up the salsa since he knew that was a major hangup of mine. For $3 you get to choose between three different salsas, so we chose chose guajilo piquin (a sharp spicy taste), avocado lime crema (a smooth gaucamole-esque sauce), and jalapeño zucchini (not bad, but not my favorite; moderately spicy). The salsas came with a bowl of homemade chips that were light and not greasy at all. Furthermore there was a little bowl of yuca chips that were tasty.

The salsas had me at the first taste and I quickly realized how crazy (and stubborn) I was for not trying this restaurant sooner.

For my meal I decided to order the Quesadillas de Jamón which was a traditional quesadilla topped with the Spanish jamón serrano. When I lived in Spain, jamón serrano was one of foods that I loved; it is cured ham and many Spanish families will have this pig leg sitting in their kitchen with a small knife. You can take the knife and take thin slices of meat from the leg which are delicious.

The quesadilla was remarkable; the inside cheese was gooey and the outside had cheese that was crispy from being cooked. Topping that was the thin slices of ham with another type of cheese on top of them. This quesadilla was the best that I have ever had, the saltiness of the cured ham brought out all the flavors of the cheese and vegetables inside the quesadilla. At $11, this can be an expensive lunch option, but you are really getting a high quality meal.

Hip, fresh, friendly and good food, Urban Taco hit every mark on a outstanding dining experience. For all you average Joes out there like me, don’t get caught up in the fact that you have to pay for the chips and salsa and get down to Urban Taco. The food and experience is more than worth the slightly higher costs that you have to pay.