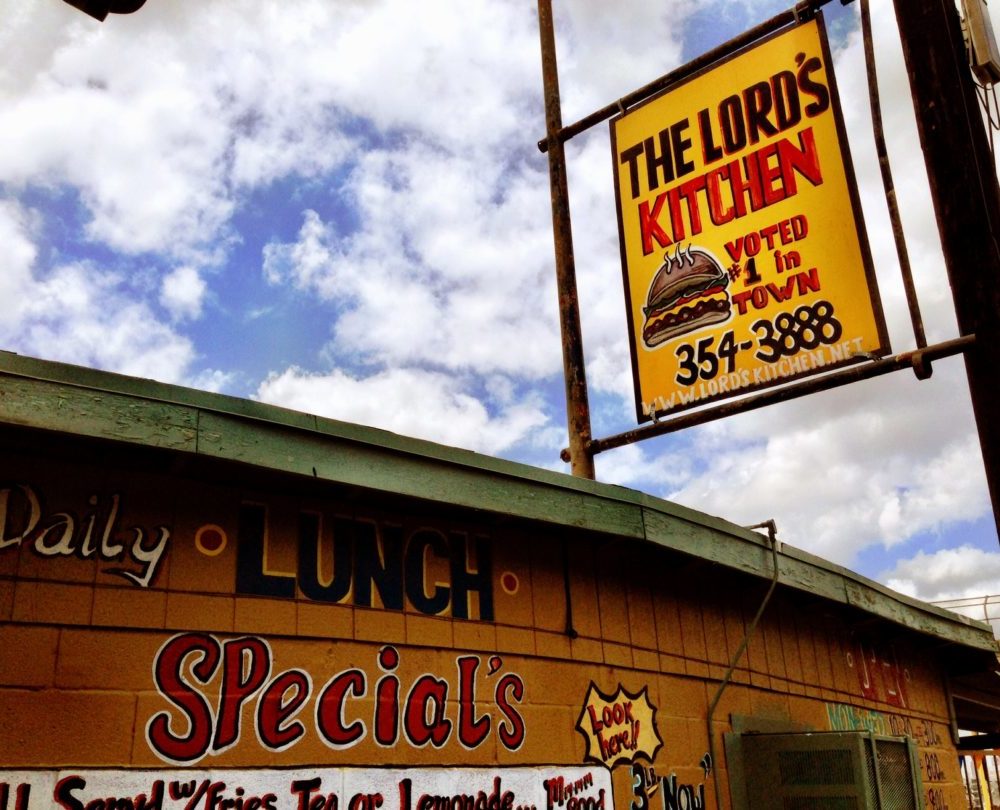 Why is it that the best burgers seem to come from restaurants that are dives? While there are exceptions to this rule (the Zinc burger for example), it often seems to me that the more out-of-the-way a joint is coupled with old school kitsch, the better the burger is.

Look no further than the Lord’s Kitchen on San Antonio’s Eastside. It is a little tricky to get to the restaurant because you have to exit the highway and then snake down from the overpass (even more difficult this past week with a street closure). You eventually show up to a cinder block building right outside the railroad tracks (more bonus points for the dive atmosphere), with a hand painted sign showing off a their three-pound burger! The restaurant was teeming with military personnel, which also plays into my other theory that a restaurant is legit whenever you see a large group of servicemen and women. 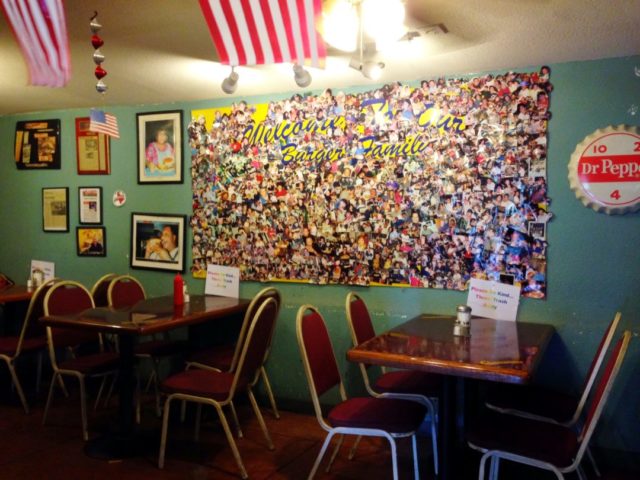 My eyes had to adjust from the bright South Texas sun to the dimly lit interior of the restaurant. During lunch, you can order the special that comes in at $12 after tax—a half-pound burger, fries and a drink. But looking at the worn menu, I decided to go with the Santa Fe Burger, a half-pound patty, BBQ sauce, grilled onions, cheese and bacon which was $9 after tax and a tip. We took a seat at a table near a collage cutout of photos back when cameras used film featuring customers and oversized burgers. If I came out of the restaurant half as happy as the patrons immortalized on the wall, I’d be more than content.

Now let’s go ahead and get this out on the table, a nine-dollar burger is more than a little outlandish to me. I know that I ordered a specialty burger, but $9 is a hard pill to swallow. Maybe that price is typical in New York or the West Coast, but here on the Eastside in San Antonio that seems a little outrageous. I mention this because right from the onset, the bar for this burger was already notched up quite a bit.

The short-order cook wasn’t stingy with the toppings. I had plenty of grilled onions, bacon and BBQ sauce that was rich, tangy and sweet. While the bun was fairly standard, there was something special about that hamburger patty. It was juicy without being greasy, and felt like there was some kind of steak seasoning in the meat. Put simply, it is one of the best burgers in the city.

I tried a couple of the fries off my friend’s plate. While the handcut fries were good, they definitely played the supporting role to the burger. Since talking about the Lord’s Kitchen with some other folks, I’ve heard that the onion rings are something to talk about. Looks like I’ll have some more research to do.

The Lord’s Kitchen does indeed deliver on their promise of heavenly food, and while it may be a little pricey compared to other stops in town, you’ll be singing their praises.