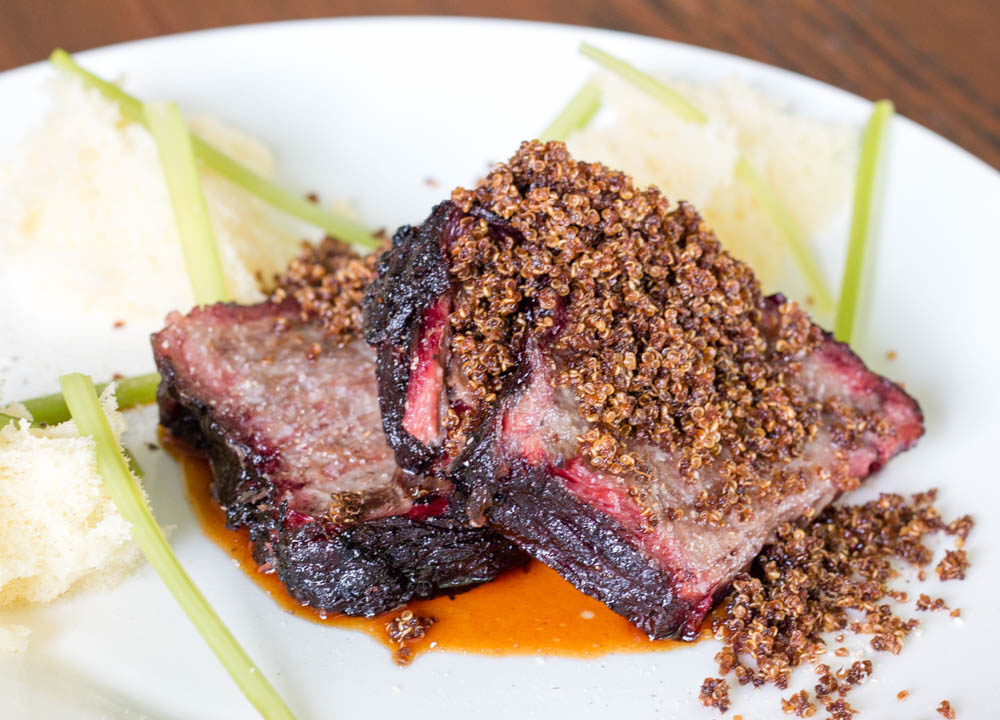 It’s no secret, The Granary ‘Cue & Brew serves some of the best BBQ in the city. Whether it is the fall-off-the-bone St. Louis Ribs (my wife’s favorite) or their perfectly marbled brisket where the fat is rendered just right with that beautiful smoke ring (my favorite), Chef Tim Rattray has proved his chops as one of the premier pit masters around.

But I’ve always been a little skittish about their dinner menu. Namely, where did the barbecue go? What do you mean I can’t order brisket? And what’s up with all these funky options? Because I love their traditional market barbecue so much—and due to the fact that it’s just hard getting out at night with an infant—I’ve always opted out of dinner at the Granary. What a short-sighted decision.

Love this article? Please support SA Flavor with our Kickstarter! Thanks San Antonio!

It was only after The Granary’s publicist reached out to me about the restaurant being named one of the Top 100 BBQ restaurants in the country (on one of those “funky dinner plates” none-the-less) that I decided to check them out for dinner.

Johnny Fugitt, the author of The 100 Best Barbecue Restaurants in America, visited 365 barbecue restaurants across 48 states in a single year, weaving together travel and food writing with creative non-fiction in order to chronicle his journey. Let me do the math for you: that’s one BBQ restaurant a day!

And when he stopped at The Granary, the dish that impressed him was their beef clod served alongside coffee quinoa (the grain is cooked in coffee, dehydrated and flash fried). Other elements on the plate are a nod to traditional BBQ staples: instead of barbecue sauce there is a caramel-tomato sauce that is sweet and slightly acidic, rather than pickled cucumbers there’s pickled celery and there’s a fluffy “aerated” cornbread instead of the dense, skillet kind.

This dish definitely changed my opinion of what The Granary has going on in the evenings. I loved how the live fire lent a smoky flavor to the clod (which had the fat rendered spot on) and how there were “elements” of traditional BBQ on the plate. The sauce was outstanding, much lighter than the thick and syrupy traditional BBQ sauces. The celery was fantastic and the cornbread was like eating a cloud. While I truly enjoyed the flavor of the quinoa, it was a little too crunchy for me (almost like grape nuts). But I appreciate the effort in adding a different texture to the plate. If it’s too crunchy for you, it’s easy enough to scrape to the side.

I had a lot of fun interviewing Chef Rattray for this video—he was a gracious host, incredibly friendly and his passion for cooking shone through. You may notice that the audio is a little rough, and that’s because a huge crowd of CIA students were right next and complicated the audio recording—they were celebrating the end of the week. Sometimes there are just variables outside your control, but I hope you enjoy the video none-the-less!