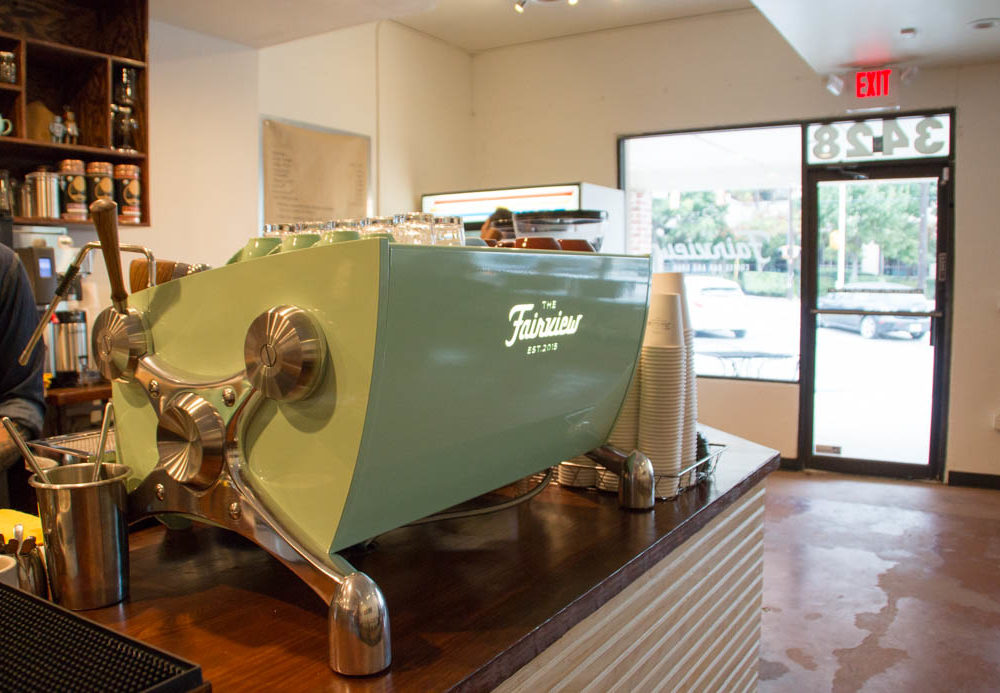 While a coffee shop that roasts their own beans and has an in-house baking program might seem like it would be full of pretense, The Fairview Coffee Bar and Grub is as down to Earth as it comes. Owner/operator John Sanchez has found a way to create a welcoming atmosphere that is true to the San Antonio culture of being friendly and laid-back. Not to mention that they pour a mean shot of espresso.

The atmosphere of the coffee shop is retro, in spite of the furnishings being completely modern. This could be attributed to the old Dodge Dart parked outside or the tunes that are spun entirely on vinyl. Behind the coffee bar are old school baking books, records and a framed tri-fold American flag, I’m assuming a tribute to someone who served. 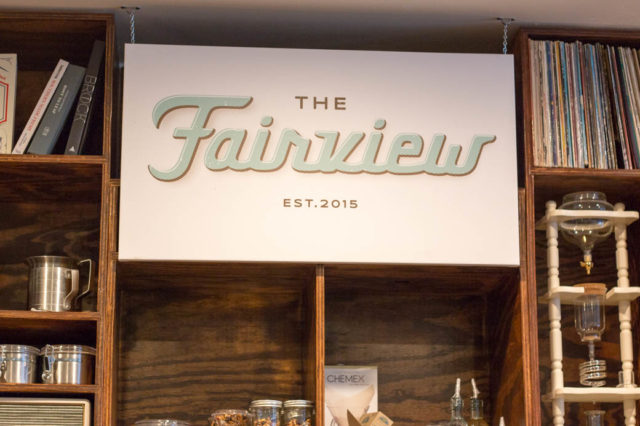 But the space is airy and light, with modern paintings on the wall and a sleek espresso machine with an aqua casing that has “The Fairview” cut out. The space forces patrons to interact with each other at either the long, wooden table that extends throughout most of the shop, coffee bar or seats along the window.

When it comes to the coffee, the program is top notch. The Americano is my go to drink and one that I’ll often pick up on the way to work and the folks at The Fairview Coffee Bar have definitely can style a cappuccino with some foam art. The cortado is nice with the steamed milk interacting with the crema from the espresso to give a nice foam.

But if you’re looking for a cold drink, give the El Chingón a try. It’s an espresso poured over their housemade horchata (the popular aguas fresca made from fermented rice) with a bit of cinnamon sprinkled on top. And The Fairview uses that kind of flaked ice that’s fun to crunch while you drink it.

When it comes to food, I’m amazed at what they can pull off with such a tiny kitchen. While their donuts are fantastic—I was a fan of this chocolate donate with lime and a chili pepper kick (though I haven’t seen it around recently) while my daughter has enjoyed their Fruity Pebble donut (she picked it out herself)—they are pricey. One donut runs the cost of a half a dozen elsewhere. But it is a fun every-once-and-awhile treat and their flavor combinations are fun to try.

I’ve recently become a huge fan of their yogurt parfait—it’s made with organic yogurt that isn’t that syrupy sweet vanilla flavor you find with most parfaits. Rather, the yogurt is tangy with a bit of a sour taste. They put a little raw Texas honey drizzle on top to sweeten it slightly, and give you some in-house made granola that’s filled with assorted nuts (I like the walnuts) and dried fruit like cranberries and raisons (on a recent visit, they even had dried coconut strips).

But if you have the time, I’d highly recommend ordering their vanilla bean waffle. The waffle mix is slightly sweet (kind of similar to the Guenther House mix) and comes out with a good crispiness. Add in the fresh fruit compote to make it even better. This waffle is the real fresh and fruity. 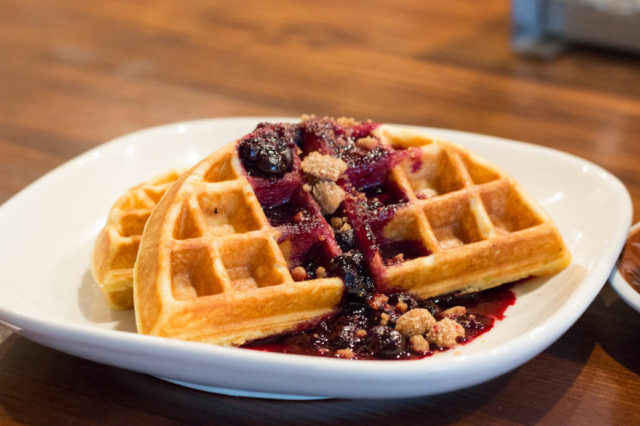 I do have to fess up—I’ve been meaning to write this article for a while now. But I’ve put it off because literally everything I’ve had there food wise has been amazing and I’ve wanted to try it all. So while I feel I’ve given you a good place to start, I wanted to point out that I’ve heard good things about their biscuits and avocado toast (I think that it’s fast becoming a requirement to bring some toast game if you’re opening a coffee shop in town), but I’ve yet to have either. Looks like some return trips are needed. 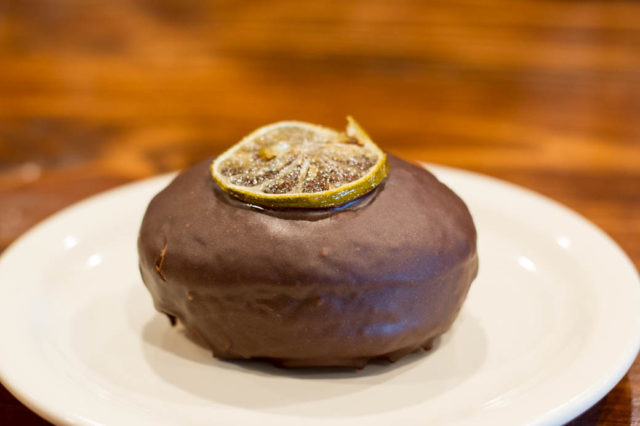 The only thing that would make The Fairview Coffee Bar and Grub even better is having late night hours—I look forward to the day where there’s a local coffee shop that stays open past 9:00 or 10:00 p.m. I drive by and see the adjacent Pizza Classics killing it when the sun goes down and know that The Fairview could do the same. But until then, I’m happy with having a spot in the neighborhood that’s doing San Antonio right.