It’s not often that you see a lively debate in a SXSW panel—especially one about food in the South Bites series. But at the Tech vs. Craft: Making Food, Wine and Spirits panel at Casa San Antonio, the tension was palatable.

The debate, which originally promised to be about what “we gain and what do we sacrifice by turning away from technology towards more traditional methods,” morphed into discussions about the merits of family farms versus industrialized agriculture, why a product has to be made locally and the role that food producers may have—or not—in changing the culture of big food.

Michael Sohocki, the owner and chef of Restaurant Gwendolyn and Kimura, has a passion for purchasing local and in-season ingredients from small family farms and ranches. He clearly is fervent about sustainable eating and believes that it’s his role to bring the highest quality food to his patrons from farmers and ranchers he trusts. Sohocki also uses old school methods to prepare food and is one of the most low-tech chefs out there.

“It took a year for people to know that I existed,” Sohocki said. “I just [made] the food that I believe in and buy from the farmers and ranchers who I know and [waited for customers] to come. I had to do it the hard way.” 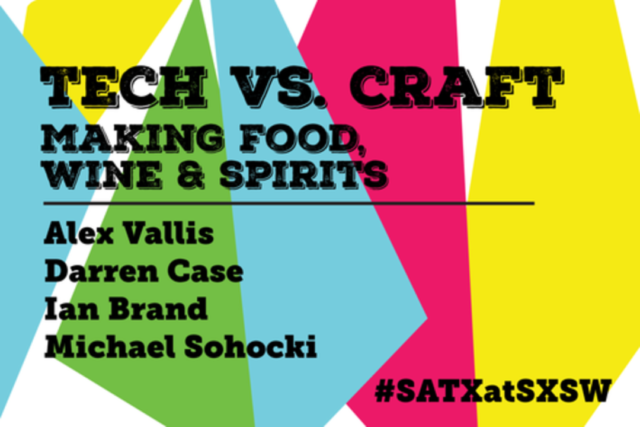 The zeal with which Sohocki talked about his craft and the purveyors of his food, was evidence enough that he’s not just riding the “local” trend. Rather the man truly believes in sustainable agriculture and he has put his blood, sweat, tears and money into brining the best possible food to the table while supporting those beliefs.

“I don’t do my job just as a way of storytelling, as a way of representing farmers [and ranchers], but also from an ecological and economical point of view,” Sohocki offered.

But the panel’s conversation took a sharp turn when Sohocki questioned the efficacy of making a spirit like Tito’s vodka in the middle of Texas.

“You have a grain alcohol that’s made from corn that’s bought from the absolutely cheapest possible seller, which is probably Iowa. So we truck in corn from Iowa and we drop it off by railroad in Texas and we apply distillation techniques that have nothing specific… to the place where they are produced,” Sohoki opined. And with Texas often in a drought and cities having to pipe in drinking water, he stated that even the water can be trucked in.

The moderator, Alex Vallis of Food & Wine Magazine, interrupted and asked the question if that is necessarily inherently wrong. “If people want vodka and they love vodka and they’re drinking it downstairs [of Casa San Antonio, the location of the panel], and they want to support a local business, is that better than shipping it from Russia?”

While not directly aimed at the co-panelist Darren Case of Round Turn Distilling, a gin producer out of Maine, Sohocki’s remarks clearly left a sting. He jumped in to answer the question.

“If I should follow [Sohocki’s] argument, then I should not be making gin in Maine,” Case said. “But for me the difference is that even thought those things are not necessarily pulling out from the local culture or the local environment, I’m there and I’m part of the story.” Case also pointed out that distilling actually was a created so that farmers could add value to their surplus harvest that could be shipped across the country.

The Impact of Scaling a Food Business

The panel concluded with a discussion on how each of the speakers would like to grow and how that growth could potentially impact the world at large. Ian Brand, owner and winemaker for Le P’tit Paysan, La Marea and IBvinification talked about the role of technology to improve his product.

“I’m a member of a tradition that goes back a millennia,” Brand said. “Everything that we do is to build on what has come before us. To help it evolve and grow.”

Brand said that his companies have been growing 15% year-over-year for almost a decade and is getting larger fermentations. “With those technology controls and still keeping your hands and skills in the fermentation, you get a better result,” Brand believes. “You have more control and more information. I feel that even though I’m making ten times the wine from five years ago, I’m also making significantly better product than five years ago.”

But when it comes to growth impacting the quality of his product, Sohocki believes that you should keep it small and sustainable.

“When you buy 500 tons of product…that means that you are dealing directly with the industrial model,” Sohocki said. “The industrial model is based on capitalism and capitalism is based on shaving [as many] pennies on the dollars as possible to get the greatest possible product margin. That’s how you end up with…all these very low-end, lowest common denominator kind of operations.”

Sohocki went on to say that he refuses to open a 200-seat restaurant because ultimately that demand will be too much for his local suppliers. “You reach a cap at which you can sustainably do this and buy from the farmers and ranchers that you know,” Sohocki said. “[You’ll] outstrip them, they can’t raise the pig fast enough. They can’t raise the cow fast enough.”

But I wanted to dive into this topic a little bit further and decided to pose a question to him. While I completely understand Sohocki’s point about the industrialized model changing our agricultural system—look no further than feedlots—I do believe that entrepreneurs who achieve a certain amount of success can influence the supply chain.

When it was time for audience questions, I asked whether a high level of growth could enable him to dictate his terms on those producers to grow food or raise livestock in a more sustainable manner. With larger busying power could he take his personal ethos and align his suppliers—no matter how large—with his beliefs.

“It’s not my job, it’s your job [as the consumer],” Sohocki said. “It was my uncle who taught me that my kingdom ends at the tip of my finger. I have to act in the most ethical and judicious way that I possibly can with the number of breaths that I have given. So I influence people in the way that I run my businesses and I have done the best to change the culture of my city by representing what I believe in and by giving the floor to my local farmers and ranchers whenever I can. I’m not big enough to change markets like Walmart or OPEC I can’t change the world by flipping the switch. But I can tell a story, I can influence people.”

Brand took a different perspective, believing that as a business scales there’s the ability to change agricultural practices for the better. When starting out, he felt that there wasn’t much opportunity to influence his farmers. But as Brand’s business grew, so did his ability to sway them.

“When you walk in and say, ‘Yes I want to buy 2/3 of your vineyard and by the way, I want it organic,’ they listen,” Brand said. “And so scaling is a very critical portion of me affecting my region. I’m meeting the largest grower in Monterey County next week to talk about bringing more vineyards organic. And it was his idea to have the meeting. He grows 15,000 acres and when you start talking about those kinds of quantities, we talk about moving the needle and that moves the needle.”

There is no doubt that Sohocki has opened up the minds of people in San Antonio, both at his restaurants and at farmer’s markets. And while I admire his passion and respect his opinion, I do feel that this “compassionate Capitalism” does have the ability to make positive change in the world, Blake Mycoskie of TOMS Shoes comes to mind. But I can’t imagine the difficulties it is to hold true to ones beliefs as a business scales—I’m sure that pressure to succumb to the almighty dollar is quite powerful, which give credence to Sohocki’s argument.

At any rate, the Tech vs Craft: Making Food panel made me think. It struck the perfect balance between the uniform agreements that has become quite common with SXSW Interactive panels with the outlandish arguments hear too often on radio and television programs. The panel left the audience with many questions to ponder from three impassioned panelists. And that’s a recipe that I hope that SXSW Interactive and the South Bites programing can repeat.

Check out our other article for photos and a recap of the opening of Casa San Antonio at SXSW! And if you’re interested in some of our previous SXSW coverage (including an article about Paul Qui and Questlove), check out this link.