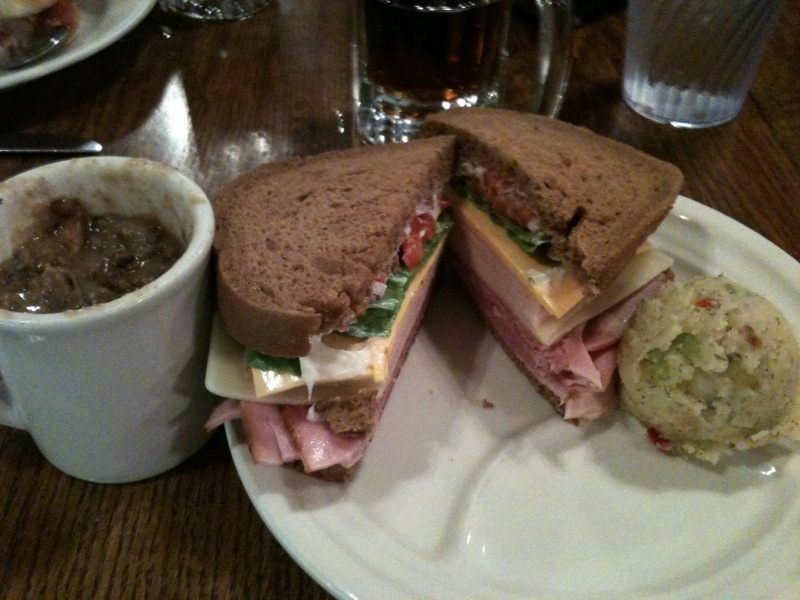 Schilo’s is a restaurant that I have wanted to go to for several years now but just have never been able to make it. This is mainly due to the fact that whenever I think about going, it is Sunday and Schilo’s is closed on Sundays! I heard great things about Schilo’s from a variety of people and it is even one of my neighbor’s favorite places to eat in all of San Antonio. Needless to say, I was pretty excited to FINALLY go eat there!

The inside of the restaurant harkens back to the good ole days. There are plenty of seats in old wooden booths and the open floor plan has high ceilings. As you enter, you will notice the display cases with all the deli meats and cheeses and old pictures from San Antonio’s past on the wall.

Our server was incredibly friendly and offered some great suggestions. She told us that we absolutely had to try the lentil soup, so I found a plate that had a sandwich on rye, cup of soup, and warm German potato salad for like $7; I think it was called Fritz’s plate or something along those lines. To wash it down, I ordered a Spaten Oktoberfest beer which was on tap.

The soup came out first and it was really amazing! It was really thick and a dark brown color with lentils and sausage and was accompanied by a slice of rye bread that really went well with it. Trust the waitress on the fact that you will absolutely want to get a cup of that lentil soup, especially on a cool fall/winter day.

Not soon after, the meal came out. The German potato salad was really good, but the sandwich was unbelievable! It was stacked high with turkey, ham, two types of cheese, and fresh vegetables all on the fresh rye bread. After the soup and potato salad, I was only able to take down half of the sandwich and I was going on a ghost tour later that night so I couldn’t take the other half home. I know when I go in the future, I am going to be able to take a doggie bag because it was so much food and the other half of the sandwich could serve as another meal all by itself! The fresh vegetables were really good, but the mayo was what made the sandwich.

I love sandwiches and have been to many different places around town, but I have to say that not only was this a terrific value, it was also the best sandwich that I have had in San Antonio. Be sure to treat yourself to this San Antonio institution on your next sojourn to the river!

Value: 10/10 ($7 for dinner… that will fill you up… that includes a soup… that is down near the Riverwalk!  What a deal!)
Atmosphere: 9.5/10 (cool old school atmosphere from a place that has been in San Antonio for many, many years; our waitress even told us that on some night they have an “Um-pah” German band come in and play)
Service: 9.5/10 (friendly waitress who made knowledgeable suggestions)
Taste: 10/10 (the best sandwich I have found to date in San Antonio!)