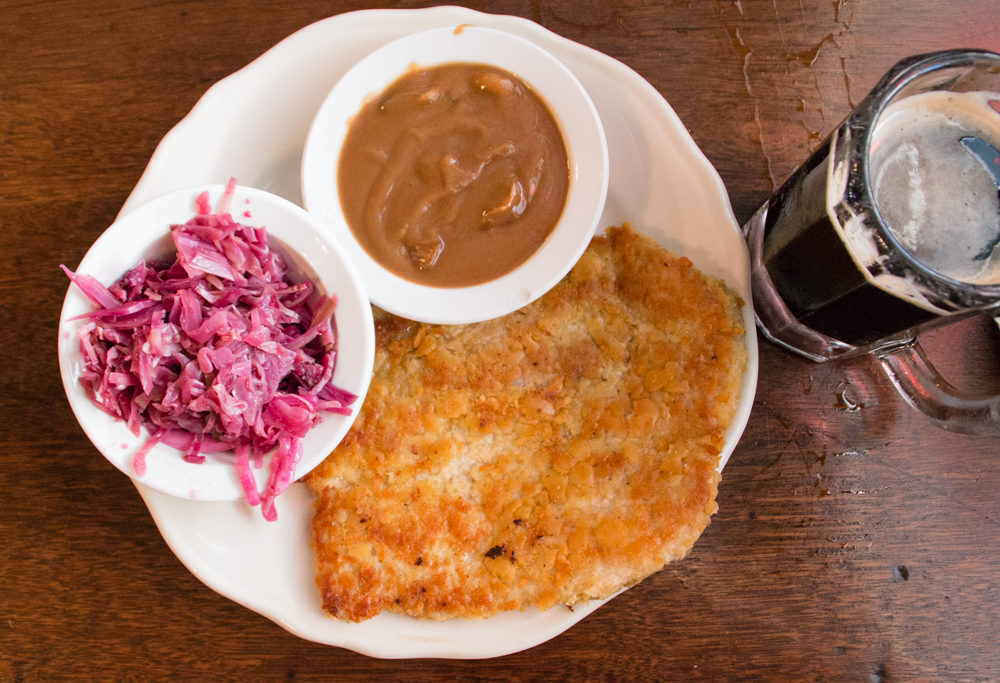 In 1927, Papa Fritz Schilo moved his saloon and delicatessen to the corner of Alamo Street and Worth, smack dab in the middle of downtown San Antonio. And that’s where it has remained for more than 80 years. In that time, Schilo’s has become an institution, offering German-style deli favorites such as the classic Reuben sandwich, Mama Schilo’s split pea soup and a wide variety of old world German dishes. Real talk right here: I love Schilo’s Delicatessen. Love it.

Though the restaurant is no longer in the hands of the Schilo family, it is still German owned and it is is still amazing. The old-style neon sign lights the way toward my personal nirvana. You open the aged wooden doors and the smells and sounds wash over you, transporting you to another time, another place, a good place.

Everything about Schilo’s is classic. The worn tiled floor, the scarred wooden tables and chairs and, if you’re lucky, your server. I recently found myself with some downtime and guests in town and decided to indulge in a little deli time. And on this particular Saturday, I was lucky to get Jose as my waiter—or “Joe” as I heard other wait staff members call him. I’ve seen him working there for a number of years; he is the kind of server that takes pride in his work.

Behind the old wooden bar is where they concoct the delicious house-made root beer, my usual drink. While they have a full range of domestic and imported beers on draft and by the bottle, do yourself a favor and have at least one pint of the root beer.

Joe delivered our frosty mugs of root beer and took our order. One of the great things about Schilo’s is that they offer a rotating daily special. These specials have been the same seemingly for decades—at least as long as the 20 years that I’ve been visiting. My particular favorite is Monday’s pot roast. Nothing beats a good pot roast and Schilo’s makes the hell out of one! We were there on a Saturday and that special is hamburger steak and mushroom gravy with two sides. While I’ve had it on numerous occasions (and I recommended it to my dining companion, I made a point of stopping by today for the Wiener Schnitzel.

Schilo’s Wiener Schnitzel is hands down tops in the city and one of the best I have ever had. For those unfamiliar, the dish is a breaded and fried pork loin, usually served with a wedge of lemon. But Schilo’s does their dish a bit different from traditional German restaurants—they have a breading is a bit coarser, not quite panko, but also not just flour and breadcrumbs. They also offer the option of topping it with a side of gravy—no doubt to satisfy chicken fried steak-loving customers. I go for that option turning the Wiener Schnitzel into a Jaeger Schnitzel. I’m a bit of Schnitzel nerd.

Accompanying the main course was a side of red cabbage. It’s tart and sweet and the perfect compliment to the entree. I also ordered the split-pea soup, another one of Schilo’s signature items. I ask Joe to bring this before the meal to whet my appetite for the main course. The cup of split-pea soup is served in a coffee cup. Take one spoonful of this thick, hearty concoction and all is right with the world. I was sopping up the last drops of my soup with some of the specially made dark rye bread when my Schnitzel arrived. I could swear I heard angels singing as Joe slides my plate in front of me.

The Schnitzel is all I could have hoped for and more. It is fork tender, crispy and juicy. I slather on the gravy liberally occasionally dipping the rye bread in to make sure not a crumb or a drop gets by me. The cabbage, again, was the right call. It’s slightly sour with hints of sweetness. It mixes beautifully with the savory schnitzel. It’s nearly the perfect meal.

Leave (Lots) of Room for Dessert

During the afternoon, especially on the weekends, Schilo’s tends to draw a pretty large crowd. Regulars and tourists flock to the place—the buzz of the busy crowd adds to not only the ambiance, but also to the meal. It’s a communal affair, all of us here in this old, historical place enjoying a meal together.

I tend to get philosophical about food but was snapped out of my daze by the arrival of the made-from-scratch cherry cheesecake we ordered for dessert. If everyone had a German grandmother, this is how she would have made her cheesecake. A thin layer of graham cracker crust cradles a more than generous layer of sweet cream cheese, topped by a thick helping of sour cream and a drizzle of cherry pie filling.

Schilo’s Delicatessen might not be for everyone. Some out there might not appreciate how worn the trappings are. Some might not appreciate how crowded it tends to get. I understand that, but I also know what good food tastes like and this is it. This is a no frills restaurant with zero pretensions. They’ve been doing this for a long time and they have it down pat. At Schilo’s, you can enjoy a great meal and connect with local history. And maybe you’ll learn to love it as much as I do.