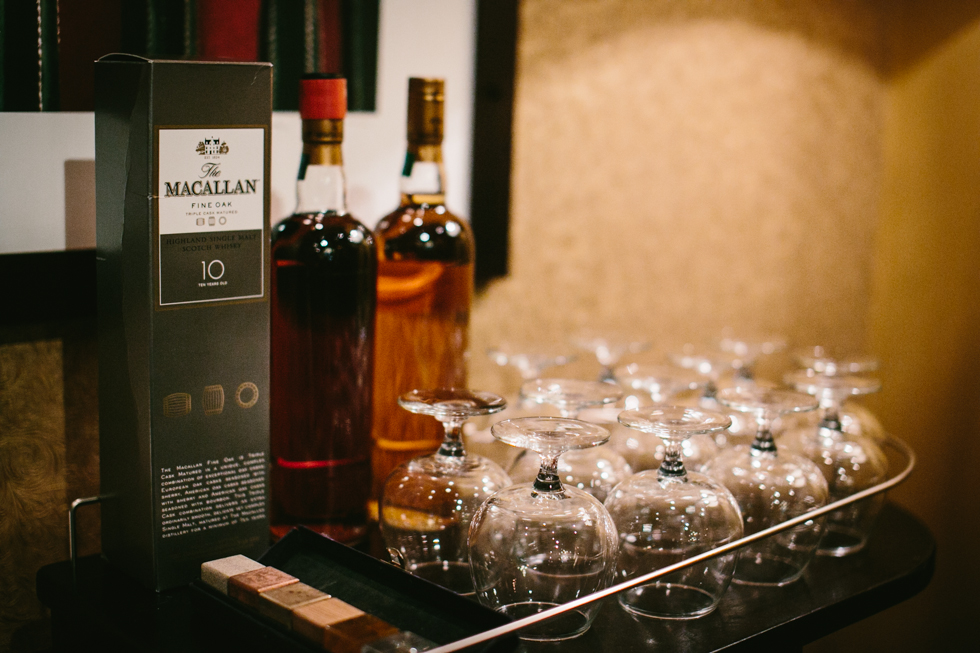 The grand opening of third annual San Antonio Cocktail Conference is scheduled for this Thursday night at the Majestic Theater, but the six-day conference already got off to a strong start with the Macallan Scotch whiskey dinner at Biga on the Banks last night. I was happy to be in attendance at this event that was truly spectacular, featuring a custom menu by Chef Bruce Auden that was paired perfectly with the selection of fine Scotches.

Randy Adams, the rep for Macallan, was an engaging host that provided a lot of information not only about Macallan, but Scotch in general. He has an extensive history of working with different Scotch brands and has spent many summers in Scotland with his wife on vacation. He told us that he was a Scotch man, not a marketing guy, and his earnest passion for his spirit shone through-and-through. Yes, I realize it is part of his job to promote his product, but he had a degree of love for Macallan that would be hard to fake.

I found it interesting that a Scotch dinner would be the kickoff event for a conference dedicated to cocktails. I typically associate Scotch as being served unmixed—often neat—but the first two drinks were mixes. The Ginger Grouse is made with the Famous Grouse Scotch, a blended spirit made by the same company that owns Macallan, that is combined with ginger beer and lime. Think of it as a Scottish take on the Moscow Mule; in Scotland and northern England it is premixed in kegs and poured into pints right off the tap.

The next cocktail was called Blood and Sand, a classic cocktail that got its name after an old bullfighting movie. It was made with the Black Grouse whiskey, which gave it a smoky taste but derived sweetness from the orange juice and cherry.

This cocktail was paired with the first course, a seared snapper on braised leeks with a tarragon hollandaise sauce. The snapper was excellent, and I really enjoyed the leeks, a traditional ingredient in Scottish dishes.

It was now time to go on to the real deal, single malt Scotch whiskeys that we had been waiting for. The first one to be served was the Macallan 12 year whiskey. While other Scotch whiskeys might be finished in a Sherry cask, Randy told us that both the 12 and 18-year whiskeys are matured in Spanish Sherry Oak barrels, one of the most expensive barrels used in maturation. This type of wood imparts spicy notes on the whiskey and for this reason it is suggested to take this Scotch neat, without any ice. For the tasting the bartender was heavy handed when it came to pouring this Scotch!

The second course that accompanied the 12-year Scotch was a plate of greens with duck confit and cranberries. The duck was very tender and I loved the pop of flavor from the cranberries.

Next on deck was the Macallan 15-year Scotch, which is aged in American Oak barrels. It turns out that one of the highest countries for exporting Macallan is America, and most Americans prefer to drink their Scotch on the rocks. After realizing this, the distillery wanted to craft a whiskey that might appeal to this audience. Randy encouraged us to use a lot of ice in the whiskey to help release some of the vanilla and honey notes.

The third course was an Australian lamb rack in tomato curry that was accompanied with a date chutney and yogurt. While I did not see it on the current menu, if you are at Biga and happen to see that the lamb rack is available, order it! Trust me on this one. Very tender and flavorful, the date chutney was the perfect amount of sweet to go with the lamb (take that mint jelly!).

Finally it was time for the moment we had all been waiting for, the Macallan 18-year Scotch. Randy told us that the mark of a good Scotch is how it will remain on your palate and develop after taking a sip, with flavors lasting up to ten minutes. Randy even told us that pound-for-pound that this was his favorite Scotch. This magnificent Scotch, by far the favorite of mine from the evening, was paired with two desserts in the fourth course. There was a duet of chocolate and pear hazelnut desserts that were rich beyond belief. I loved how the pear dessert had a little bit of a crunch and interacted with the flavor of the Scotch—the caramel sauce even had a bit of Macallan 18-year mixed into it as well!

I couldn’t believe how amazing both this meal and Scotch pairings were, but there was one more surprise that Randy had up his sleeve. Apparently the CEOs of both Oakley and Macallan are friends and decided to collaborate on an insane, over-the-top project to create an indestructible flask. Oakley provided the technology to create the flask and Macallan allowed the head distiller to pick a special barrel to be bottled to accompany the flask. Randy said he chose a 22-year barrel of Scotch and when the flask and whiskey hit the market collector’s snatched up the items, driving the price to well over $1500! But for the dinner, Randy brought an unmarked bottle of this liquor to be served at the conclusion of the meal and it was incredible.

This event certainly set the bar for the rest of the week. It appears that the San Antonio Cocktail Conference has adopted the philosophy of go big, or go home. With that said, I am definitely excited to see what the week has in store and look forward to providing you all with some photos, videos and interviews from the conference!