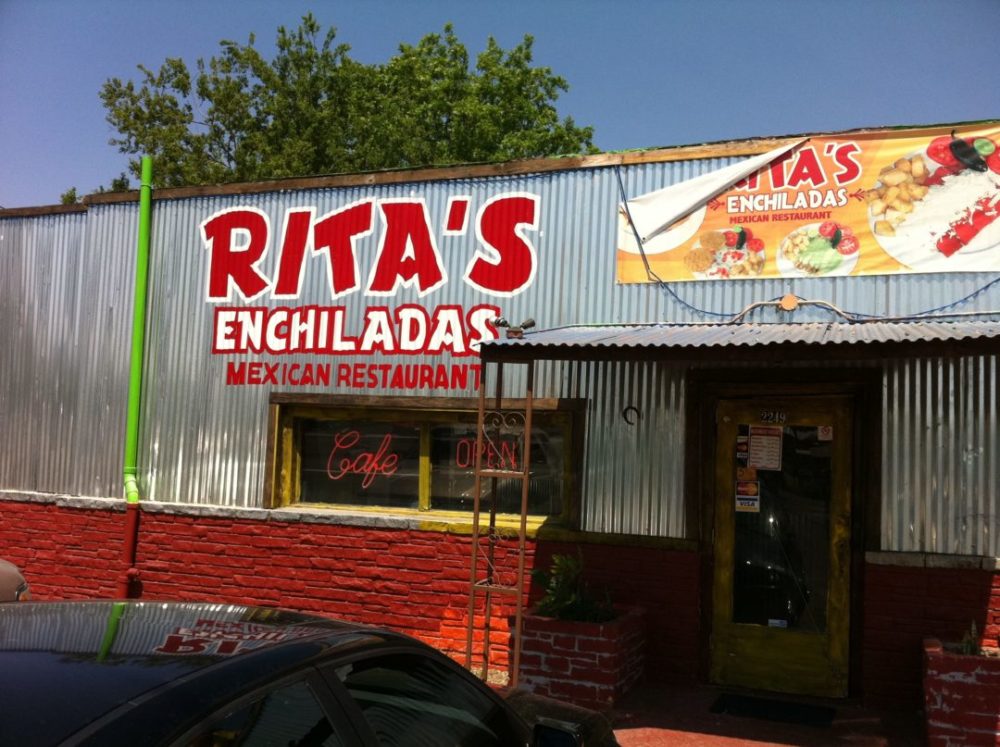 My love of restaurants in shack like structures took me to Rita’s Enchiladas the other day.  Situated on Austin Highway a couple of blocks West of Perrin Beitel Road, Rita’s is a restaurant built out of corrugated tin and red paint and serves up more of traditional brand of Mexican food in a compact menu.

The inside of Rita’s is no frills with tables, a cashier’s counter, a fridge for sodas, and a few bits and pieces of Mexican folk art on the wall.  I sat down at one of the tables and was greeted by the lady who was behind the counter.  She seemed a little short, but I think it may have been more due to her ability to speak English and the fact that she wanted to get orders in before the lunch rush rather than her personality.

At any rate, I looked at the menu and found that there were about seven to ten lunch plates that all ranged between $6 and $6.50.  I decided to go with The Mix as it contained a little of everything: two enchiladas, two flautas, and one taco dorado.  After I saw the tall glass bottle of Mexican Coke in the fridge, I ordered one when my food came out.  The $2 charge for Mexican Coke is always worth it, as a soda made with sugar cane is always superior to the corn syrup American version.

My food came out promptly and I was impressed with the amount on my plate.  The waitress brought out both red and green salsas; the green version was the real deal and had a nice heat to it.

The taco dorado was my favorite item on the plate; it is a smaller fried corn tortilla folded like a taco but almost enclosed like an empanada.  Unlike an empanada, the shell is very crispy and inside had refried beans and meat.

The enchiladas were good but not what I was expecting.  Instead of being a Tex-Mex cheese enchilada with yellow cheese and soaked in gravy, their enchiladas were a red corn tortilla rolled loosely with only the white farmer’s cheese.  There was not a thick sauce, and while I missed it at first, I did enjoy the lighter feeling of this enchilada.

The weakest link was the flautas which resembled a taquito more than a flauta.  The corn tortilla was wound so tight that it resembled Cruella DeVille’s long cigarette and barely had any meat in it and the green sauce that topped it didn’t have much flavor.  The plate was garnished with a healthy amount of potatoes and even had a grilled pepper that helped spice up the flautas.

Overall, Rita’s fit the bill as being good, quick, Mexican food that is not too expensive.  If you have grown tired of all the Tex-Mex fare and are looking for something a little different for lunch, give Rita’s Enchiladas a shot.

Value: 8.5/10 (at $6 – $6.50 for a lunch this is reasonable, but you will want to add a Mexican Coke which might make it a more expensive lunch)
Atmosphere: 7/10 (really no frills kind of plain dining environment; not enough ephemera to make it a quirky hole in the wall)
Service: 7.5/10 (not bad service but not anything remarkable; at the end of the meal I did get to talk with the son of the family that owns the restaurant who was really nice)
Salsa: 9/10 (green salsa is spicy and will kick up your meal)
Taste: 8/10 (good food but different than what you might be expecting; the flautas are what brought the rating down as they just aren’t all that good)
Twitter: http://twitter.com/ritasenchiladas
View on Map