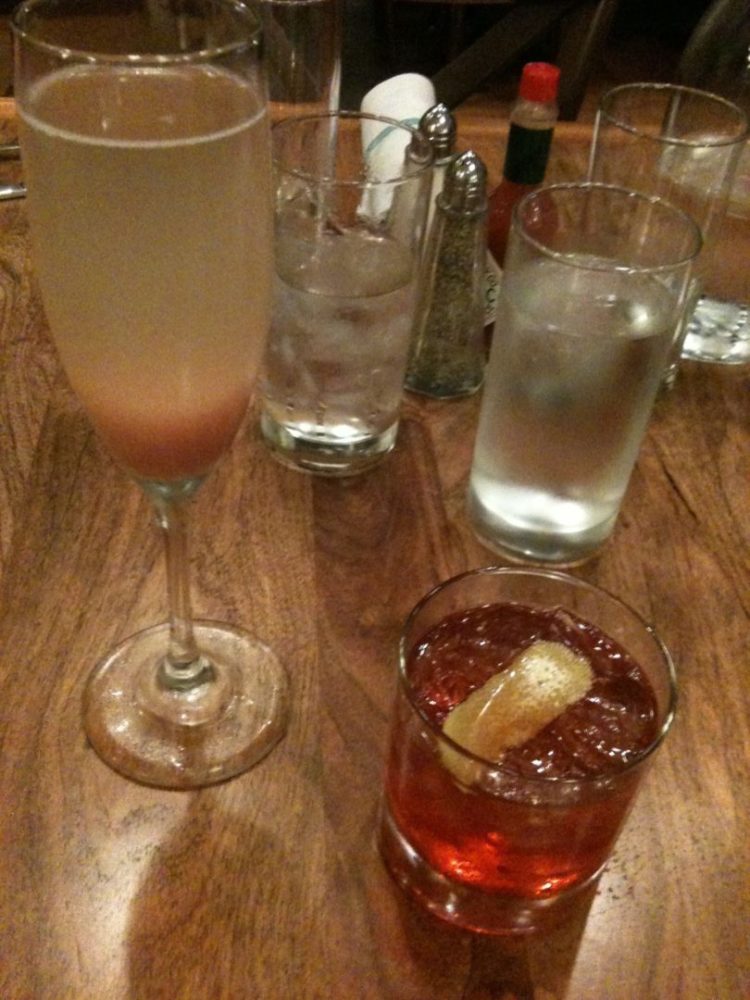 Last week, I heard through the grapevine that Lüke San Antonio was to finally open on November 23rd.  At the last minute, I was able to get a reservation, so I decided to take a date out to the restaurant on opening night to see how everything would be.

As you might recall, I was able to preview the restaurant a while back and was excited to finally get a chance to dine there in person.  The grand opening kept slipping (as a person who works on projects, I completely understand how that can happen), so I didn’t take the rumors too seriously when I heard they were opening.  After seeing some folks on Twitter say they had reservations, I had to call up to get a spot!

First off, I love the atmosphere of the restaurant: it is right off of Houston Street, adjacent to the Embassy Suites and on the river.  The inside was very nice and was bustling; I don’t think there was a seat to be had at the 40 foot long bar!

Starting off with drinks, I went with the Sazerac (a classic New Orleans cocktail) as I was really looking forward to it after talking with Stephen Jeffcoat (the manager in charge of the bar) at the preview.  The first sip took me a little by surprise (the liquorish taste of the absinthe starts off strong), but as you drink more of the cocktail it really smoothes out and the flavor from the lemon peel comes into play.

I later got their signature drink, the French 75, which is made with cognac and champagne (among other things).  Glancing around the restaurant, you could see that most tables had this cocktail.  Stephen said that it just flies off the shelves and is a favorite at the Lüke in New Orleans.  While the drink was good, I’ll tell you what, I am going to stick with the Sazerac as it is more my speed.

We ordered the flammenküche appetizer after it caught our eye, and I can best describe it as the size of a medium plate with a crust that is really thin and crispy.  It was topped with sweet onions, caraway and Emmenthaler cheese, and big chunks of bacon.  While I didn’t think this appetizer tasted bad, it wasn’t necessarily something I liked (although the bacon was really solid).  After talking with other folks who were at the opening (including Lauren, of ohmypudding blog, and Juan, the manager at Sip Coffee), I heard that the cup of fried shrimp was really out of this world and would advise anyone ordering that appetizer.  I would give this word of caution, if there are only two of you, the appetizer will fill you up to the point that you won’t have room to finish the main course.

Lüke has a daily express menu that includes a soup, entrée of the day, and dessert.  Tuesday’s special was the roasted suckling pig, so I decided to get the daily special.  I chose the crab bisque for the soup and was blown away.  The soup had a very rich flavor with a little bit of spice that I really enjoyed.  This soup alone was worth coming in.

While I kind of thought they would serve the suckling pig as a whole pig (I had this before in Caceres, Spain which was one of my favorite meals while I was studying abroad), they actually had pulled the pork and arranged it in a meat cube with cherry mustard sauce on top.  The meat sat on top of some greens and there was like this cornbread stuffing (I don’t know what it is called exactly) on the bottom that had pieces of ham in it.

I know that a “meat cube” sound kind of bizarre, but this dish was amazing.  The pork was really tender and the tangy cherry mustard complimented it well.  Ever since living in Memphis, TN, I have become a big believer in pork dishes.  The amount of pork that they give you is deceiving and I could have easily taken some home had I not been leaving for the holidays.  The greens were nice and salty which complimented the pork and I really liked the cornbread stuffing mixture at the bottom.

My date ordered the croquet madame which is a variation of my favorite Parisian street food, the croque monsieur, which has an egg on top of it.  I had a bite and really enjoyed it; I think that if I was to stop by for a quick lunch I would either opt for this dish or something from the cold bar.

As full as I was, I of course had room for dessert.  One thing that I wish that Lüke did was list their desserts on their menu so I could sit and imagine which one I was going to get.  Our waitress did a good though of telling us about the desserts.  We ended up ordering a crème brûlée along with this Black Forest mousse; miraculously, I found enough room to make sure that I could eat my entire dessert.

Upon receiving the check, our waitress informed us that for the soft opening the management would be comping everyone’s meal so I got to eat for free.  This was a pleasant surprise and I was very thankful for the gesture and made sure to really take care of my waitress.

I would like to end by saying how smooth this soft opening was.  All of our food was brought out in a prompt manner and there were only a few hiccups in that the first round of drinks took a bit of time and I had to wait to get a spoon for my soup.  I only mention these things to give you a picture of how good everything was.  Keep in mind this was OPENING NIGHT and I only encountered those minor issues; this restaurant is already a well oiled machine.

The service was superb from the moment I was greeted by the hostess until I left.  In between, I got to visit with several managers, the general manager, the co-owner, and the chef himself.  My waitress was extremely cheerful and personable and always on the spot checking up on us without being intrusive.

The location, the service, the value, and most importantly the food will ensure that Lüke San Antonio will become a favorite destination of locals and tourists alike.

Value: 9.5/10 (the daily express menu special runs $23 an includes soup, entrée, and dessert; you can’t beat that value for this nice of a restaurant on the river)
Atmosphere: 10/10 (awesome atmosphere with a 40ft bar and full of conversation; being right on the quiet part of the river where you can take an after dinner stroll is also a plus)
Service: 10/10 (excellent service from the hostess on up; I toppled over some pomme frites and the manager was nearby and the first to pick up the mess – I really admire this servant leadership where he was not above getting dirty to deliver awesome service)
Taste: 10/10 (fantastic all the way around!)
Website: http://lukesanantonio.com (however, they do not have a menu online right now; for this, go to http://www.lukeneworleans.com/menus/menus.html to get an idea until they update the website)