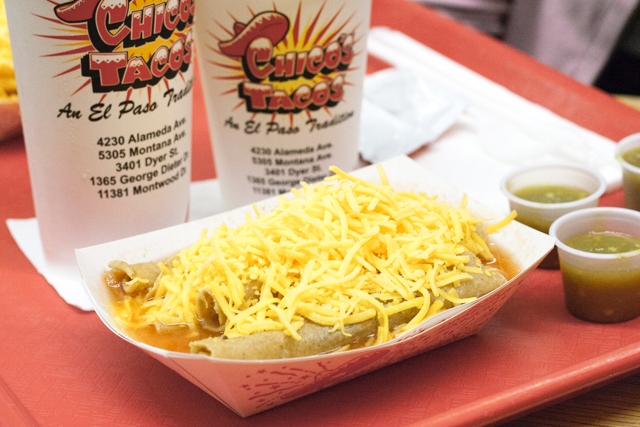 There are two kinds of people I can understand who won’t like Chico’s Tacos in El Paso, TX: (1) those who are lactose intolerant and (2) those who hate soggy food. Fortunately for me, I love cheese and will typically douse my chilaquiles from Thousand Oaks Cafe with ranchero sauce.

San Antonio Jane and I flew into El Paso this past Friday to begin our vacation throughout the Land of Enchantment (a cheap Southwest Airlines ticket and a rental car is worth the time it takes to get across the Lone Star State even if there is an 80 mile-per-hour speed limit). Prior to departure, I asked some of SA Flavor’s Facebook Fans where we should eat in El Paso. Immediately, several El Pasoans responded with Chico’s Tacos.

Now this set off a firestorm of comments, both touting Chico’s virtues and others warning me to stay away. While getting the rental car from Enterprise, a cashier originally from NYC bristled at the mention of Chico’s. These widely varied reactions, coupled with the fact that Gustavo Arellano named Chico’s as one of the best Mexican food joints in the US led me to want to try it.

The location near the airport was packed with people and parking was a premium, so I figured something must be good. Walking up to the counter, we noticed that the menu was not very expansive – it seemed like you could either order tacos, hamburgers, fries or a soda. There were different options for adding additional cheese and sauce, but that was pretty much it. Chico’s limited menu is to Mexican food as what In-and-Out Burger is to hamburgers.

We opted for a double order of tacos (there are three tacos to an order), a basket of fries with cheese and two sodas. The total came out to about $9 and we found one of the few vacant seats to wait for our order. People continuing flowing in and out of Chico’s – there were families crowding booths, businessmen in suites and even cops stopping by on patrol. Our ticket number was called, both in English and Spanish, and I went up to get the food.

Immediately I could see why some people outside of El Paso would have issues with the tacos at Chico’s. They are more like taquitos, rolled corn tortillas filled with meat and fried, rather than the traditional soft of crispy taco that so many people are familiar with. The tacos are then drenched in a sauce that is more of a consistency of broth, rather than a salsa, and topped with mounds of cheese that seems to be the pre-shredded variety that has a small amount of powder to keep the pieces from sticking together. The same cheese was also piled high on the fries.

While picking up the order, one of the guys manning the staff noticed me with my camera and said, “First time at Chico’s?” He told me that after eating the tacos to take the fries and dunk them in the sauce, a piece of advice that was echoed on the Facebook wall.

I found the tacos to be different but enjoyable. Again, I am a fan of runny sauces and don’t have an issue with it making my food soggy. The sauce was reminiscent of a ranchero style sauce that became more addicting as you ate it. Indeed, the fries were tasty by dipping them in the sauce, an almost tortilla soup style mixture with a layer of cheese after the tacos were all gone. I would advise you to forgo the cheese on your fries; they are not shy about putting it on your tacos and there will be plenty of cheese left over at the end of your meal. Chico’s also has little containers of green salsa, which is plenty spicy, that you can further dip your tacos and fries if you are looking for more heat.

As I was taking my picture outside next to the sign, a guy around my age who was with his parents and family stopped and asked if it was my first time from Chico’s as well (I must have had “tourist” written all over me on this trip!). I told him it was and that I had just landed from San Antonio. He mentioned that he was on the same flight, and as soon as his family picked him up he had to get over to Chico’s, that it was a taste of home and something unique to El Paso.

This exchange reminded me how much food is part of the human experience and how it can imprint a sense of home on our conscious. There are plenty of restaurants in Lubbock that I have to visit when returning home (Giorgio’s, Rosa’s and Taco Villa to name a few) that remind me of good memories with friends and family. Often times, outsiders can dismiss food unique to a city or region not because it is good, but because it is simply different from what they are familiar with.

Admittedly, the tacos at Chico’s don’t feel like tacos to me, but then again I am not from El Paso. Those San Antonians stopping by Chico’s should keep this in mind, and maybe order the sauce on the side if you don’t want the tacos to get soggy.