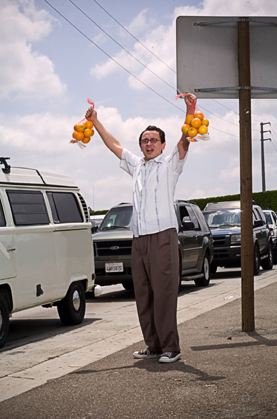 After finishing Taco USA: How Mexican Food Conquered America (read my review here), I reached out to author Gustavo Arellano (who is also the guy behind the ¡Ask a Mexican! syndicated column you read in the Current) to ask questions about the book, his favorite restaurants in San Antonio, if I was wrong for loving Tex-Mex so much, why gringos like flour tortillas and his opinion of Taco Bell’s Doritos Locos Taco. Here is what he had to say.

You began wanting to write Taco USA in 2007, and then a lightning bolt hit – the Korean taco. What about that taco was the catalyst for you to start the book?

I vaguely had an idea that I wanted to do something about Mexican food, but I just didn’t know what I wanted to do. I figured that someone had already written about the history of Mexican food here in the United States. But then I started researching and realized that no one had done an in depth study of the trend.

I then stumbled across this Korean taco and it hit me: Mexican food is not just what I think it is. There are different manifestations. And it is not just Mexicans or white people who enjoy Mexican food, but Asians as well. I mean, I kind of knew [this], because here in Southern California everyone likes Mexican food, as well as across the country, but then to have a creation, like a Korean taco, you’re not supposed to do that. Only Mexicans are supposed to make tacos.

That [Korean taco] though, really was spectacular; more important it was delicious. As a reporter I am always looking for stories to see where they lead me, and frankly, this one led me into the book.

I have not had a Korean taco yet, I need to try one.

After reading the book, it seems that the city of San Antonio and South Texas has really given a lot to the American Mexican food scene. What are the top things in your mind that our city has contributed.

Oh my God, so much. I did a list that actually got me in trouble of the five cities that contributed the most to the evolution of Mexican food in the United States: (5) El Paso, (4) San Francisco, (3) Dallas (so the people from Houston got all pissed off at me because I guess they hate Dallas), (2) was Los Angeles, but by far (1) was easily San Antonio.

They have given so much to Mexican food in this country, and my book details almost all of it: from the Chile Queens and the spread of chili (both the fresh version and the canned version), to Gebhardt’s chili powder and chili (even though he started in New Braunfels he moved his operations to San Antonio), to the creation of tortilla chips, the invention of Fritos, to Pace picante sauce (which hey, it’s not the best hot sauce around any more but it revolutionized the popularity of hot sauce), to nachos …  there’s so, so much.

As much as I want to be a booster of Los Angeles and Southern California when it comes to the evolution of Mexican food, I’m not going to lie: San Antonio beats almost everyone combined. It really is amazing to see this city about four hours away from Mexico to be the crossroads of Mexican food in this country.

So what is it about San Antonio that made it conducive to all these contributions?

In my research, San Antonio was that gateway city to the rest of Mexico through most of the 1800s even into the early 1900s. El Paso is just so far away from everything else, and culturally is more New Mexico than Texas. The way I explain it in the book is that most of what constitutes Tex-Mex food started in the Rio Grande Valley and South Texas, so the closest big city is San Antonio. Everything starts in the South, filters up to San Antonio and from there spreads across the rest of the United States.

It seems like the Chili Queens were mysterious and sensual women, was this the press trying to draw interest or were people showing up from something more than just chili?

That has always been the allure of Mexican food and the Chili Queens were the ones that started the whole trend and set the template for what would follow as Mexican food. Americans have always loved the Mexican food, but they have always wanted to get that “authentic” experience: going to the other side of town or going to eat tacos from food trucks.

Journalists would tell people to go to San Antonio and do your patriotic duty to visit the Alamo, but then go [see the] Chili Queens, [who] serve this amazing food and are beautiful. It is this “exotification” of Mexican food using women, but at the same time they did the same thing in other parts of the United States with Tamale Men. Here’s [this guy] who’s always friendly, dashing, handsome and is going to sell you this “toothsome” meal. Whereas the Tamale Men spread across the United States, it was only in San Antonio that you could find a Chili Queen, and in a way I think that San Antonio wanted it that way because you had to come there to get that Chili Queen experience. But of course, the chili spread across the rest of the United States.

On the next page Gustavo gives insight into the differences between the breakfast taco and the breakfast burrito, discusses whether or not it is wrong to love Tex-Mex and talks about gringos love of flour tortillas.