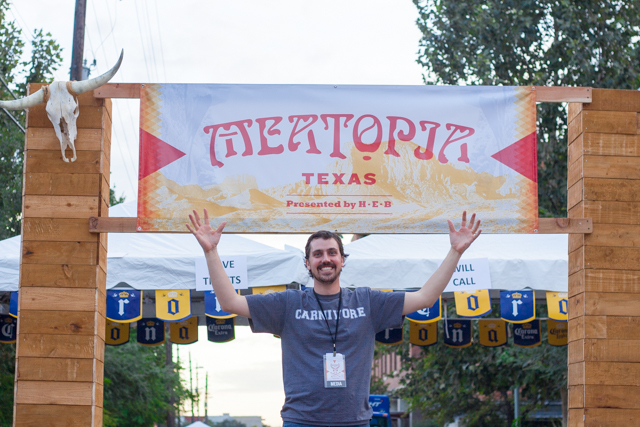 Meatopia. The utopia of meat.

I don’t think I could come up with a better name for this festival (though my mother-in-law’s “Meatorama” would be a close second). There were untold pounds of meat and numerous carcasses smoking over an open flame. The first appearance of Josh Ozersky’s festival outside of New York City was a smashing success with not a soul leaving the grounds of the Pearl Brewery saying, “You know, I wish I could have eaten more meat.”

I was excited to attend the event and was fortunate to have Matt Niemann of Aberdeen Studios come along to capture some of the sights and sounds on video. I’ll be posting a couple of videos with the Meatopia chefs each day over the course of this week. You’ll see and hear from some of the most creative carnivores both local to San Antonio and around the country. But we thought we’d break you off a little bit of the remix tonight! Enjoy the video and be sure to check SA Flavor out on Facebook and Twitter to find out about the upcoming videos.

Special thanks to the good folks at George Dickel Tennessee Whiskey for throwing such a great media party and providing us with whiskey throughout the weekend. As one of the reps told me, “If all you know about Tennessee whiskey is Jack, then you don’t know Dickel.” Pick them up at Spec and give ‘em a go the next time you mix an Old Fashioned.