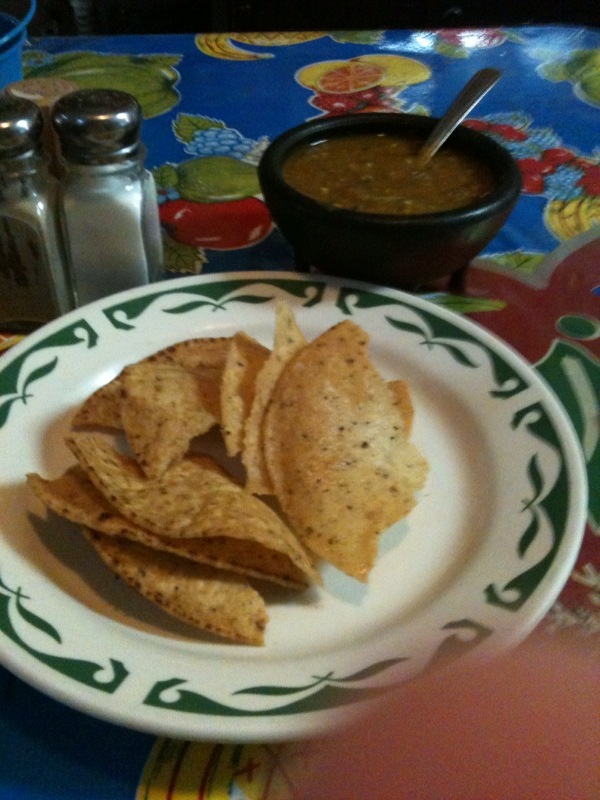 San Antonio is rich with many different neighborhoods and pockets sprinkled throughout our million+ person city. However, most of the time it seems that we stay in our little pockets and rarely venture out to explore other neighborhoods (with the exception of taking a visitor to the River Walk). I think that this is human nature as we don’t like change and want to stay in our comfort zone. I have tried going to different restaurants all over the city, but in my posts I think you can see one overarching trend – most of them are North of downtown. For this review, I decided to go snag a bite to eat at Maria’s Café off of Nogalitos on the Southside.

I was alerted to this restaurant by Andy Benavides, a local artist who owns a frame shop/gallery on South Flores when I dropped by to pickup something (Andy’s frame shop deserves a post unto itself; I will have to do this in the near future). Andy says that Maria makes some of the best Mexican food in town at some of the best prices; you have a good probability of running into him there during lunch.

There is an old adage of not judging a book by the cover; well the same should apply for restaurants. Maria’s is a smaller building and there is really not a defined parking lot (I park just across the street to the south). The inside is definitely small with plenty of ephermera on the walls and a television showing the news; the floors are uneven and the aisles are not very big.

As I took a seat, a lot of the locals were coming in and talking among themselves and the staff even though they were sitting at different tables. You could hear some people discussing the news with the waitress and each other; it felt like the way café dining must have been in a different time when people interacted more instead of gulping down food before the next meeting (unfortunately I would have to gulp down the food to get back to work within the hour).

I ended up ordering the lunch special which was two chicken puffy tacos, borracho beans, fideo, and an iced tea for $5.50 (remember to bring cash as I don’t think Maria’s takes credit cards). Before I got my meal, I got some chips and salsa that was really good.  The chips were homemade which I think was essentially a deep fried corn tortilla that was cut into pieces. The salsa was thick and a darkish color that was a sneaky type of hot. It was tasty, but man, it had a slow burn that would kick in after you swallowed it. The heat continued to burn and felt like it lasted longer than that one guest who won’t leave your party after it is over!

The meal came out pretty promptly and was nice and hot. I don’t know how she did it, but it seems as though Maria’s Café is the first place I have been to in San Antonio that can make a puffy taco in which the tortilla will not disintegrate after you start eating it! The tortilla was nice and crispy and the shredded chicken was to die for. It was nice and juicy and full of spices and flavor; it tasted almost like the shredded chicken that is in caldo that has had time to simmer with all the vegetables and ingredients.

The borracho beans were a little weak in the sense that they really didn’t have much spice/flavor to them other than that of the beans themselves. I ended up adding a little salt and salsa to wake them up. The fideo on the other hand was magnificent! Since coming to San Antonio, I have really enjoyed being introduced to fideo; for all you gringos out there who are like me and do not know, fideo is a pasta that is in a soup that has a garlic kind of taste to it – in a way the broth kind of has a similar flavor to the Spanish rice. It is served hot and really warms you up on a cold wintery day.

When I left to pay the bill at the register, Maria joked with me and said, “That’ll be $1,000.” I kind of looked at her and laughed and man who was eating at the table by me said, “Tell her that the food sure is as good as a thousand bucks, it’s just that you’re not gonna pay for it!” This is the type of interaction that makes eating out more than just about the food itself.

Value: 10/10 ($5.50 for a full plate of food and a tea is all right by me!)
Atmosphere: 7/10 (small, uneven floors, quirky things all around; I like this type of stuff but others might not)
Service: 9/10 (nice staff who makes sure you are taken care of)
Salsa: 9.5/10 (do not eat this salsa if you don’t like spicy things; it is slow burning and I really enjoyed it!)
Taste: 9/10 (the chicken and fideo were packed with flavor; the homemade corn tortillas were nice and thick; the borracho beans didn’t have a ton of flavor, but add a little salt and salsa and you’re good)
View Larger Map