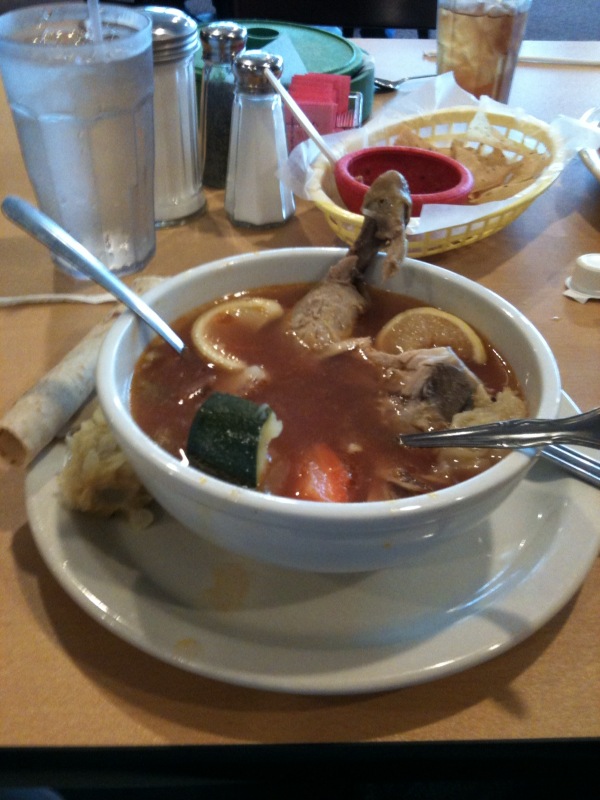 Lula’s has now moved downtown to Travis and Soledad.

One of the best parts about going to a restaurant is when you get the feeling that you belong and are truly welcomed into someone’s dining room.  Most often, this happens at the places that you frequent on a regular basis; rarely does it happen when you come to a restaurant for the first time as it did to me at Lula’s Mexican Café.  It was turning out that I was having a rough week, and decided to go to a new place for some Mexican breakfast.  Upon sitting down at the table, Lula herself asked how I was doing.  When I told her, “Not too well,” she told me that she was having a bad day too and she took a little extra time to sit and talk with me.  When a business owner displays a certain sort of humanity with their customer that action lends itself to creating customers for life.

But enough about owner/consumer relations; you want to know about the food.  Turns out that it was exceptional and warrants a discussion on both breakfast and lunch.

I had gone for breakfast on a Friday a few weeks prior, and I was in for a treat because it turns out that on Friday there is a special on the chilaquiles plate (that includes refried beans and potatoes) with a cup of Joe for $3.99!  Seeing that I love chilaquiles, I could not pass that offer up.

I was shocked at how much food I received and how rich the flavor was; the beans had an exceptional flavor to them and went nice with the thick flour tortillas.  The chilaquiles were made with the white cheese instead of the yellow cheese that I typically find in San Antonio restaurants and had quite the kick to them; to take them up a notch I used some of Lula’s green salsa (you have to ask for it) which really had a nice spice.  The service was impeccable and I don’t think I was ever able to empty my coffee cup without it being promptly refilled.

A few weeks brought me back to Lula’s today for lunch.  The chips and salsa were incredibly addicting as the chips were fresh and came out really warm.  It was pretty rainy and cool outside which is always the perfect recipe for some caldo.  I decided to get the caldo de pollo (basically chicken soup with vegetables) and was brought out a big steaming bowl of soup with a side of rice.  The caldo was very tasty, having big chunks of zucchini, potato, carrots, corn on the cob, and a big chunk of chicken on the bone.

Having the meat on the bone is truly the best way to serve caldo as it really gives the soup a nice flavor.  I got corn tortillas on the side and they were just as thick as the flour ones; I love some corn tortillas that have a little thickness on them, and you will like Lula’s corn tortillas even if you are the flour tortilla loving gringo like me.  I think that the lunch was around $6.50 and was entirely worth it as I shelved any sense of manners and picked up the bowl to make sure I got all the soup that was left!

Value: 10/10 (If you get the morning special, you are going to have a full plate of food, tortillas, and coffee for around $4! I think you can get two tacos and coffee for $2.50 – $3.00; it is unbelievable!)
Atmosphere: 8.5/10 (very clean and bright interior)
Service: 10/10 (incredible service from not only the owner, but also all the waitresses; when I went for lunch a coworker of mine was dying because the steak a la Mexicana had a lot of spice and the waitress was constantly on the lookout to refill his tea to help quench the spice!)
Salsa: 9.5/10 (if you like spicy, as for the green salsa to compliment your meal; the warm chips and salsa are addicting)
Taste: 10/10 (incredibly tasty; you can tell the food is prepared with a lot of pride; a new favorite of mine in the Alamo City)
View Larger Map