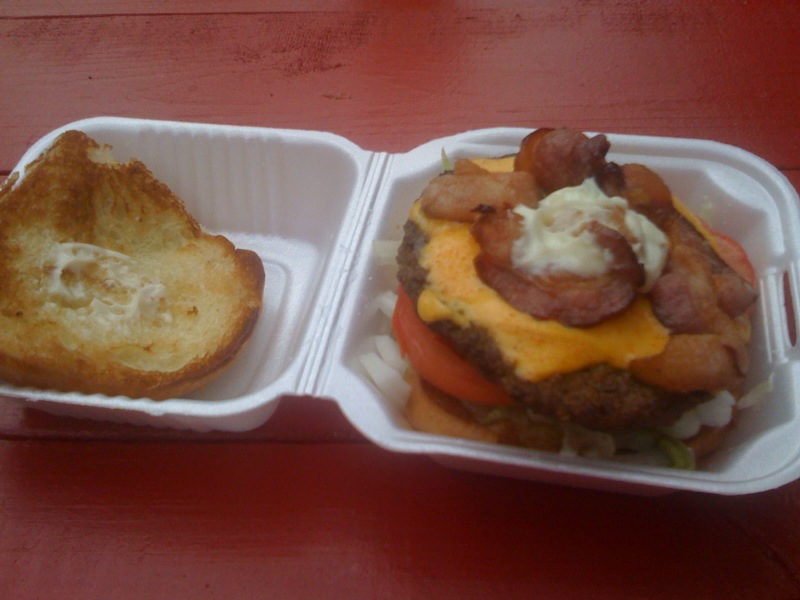 There is a saying that good things come in small packages, but would this prove true at Kong’s Burgers and Wings whose slogan is “Little Place, Big Taste”?  The restaurant is situated across the street from the old Windsor Park Mall off of Walzem Highway in a tiny brick building that doesn’t have any indoor seating; don’t worry, if it is cold, you can just drive through.

The Kong Burger (the namesake of the restaurant) was billed at a full pound of beef; I wasn’t exactly all that hungry, so I opted for the smaller half pound burger and dressed it up with cheese, bacon, and avocado.  I think that the burger had a base price of $3.99 and each of the items that I added were $0.70/item.

When I picked up my burger, I was shocked by how heavy the little bag was; I knew in spite of being the ½ Kong that this burger wasn’t going to be playing around.  First off, let me talk about the bun.  I have never had a bun quite like this one as it was incredibly dense and the bottom was toasted to perfection.  Similar to Biff Buzby’s, the bun was sweet, but it was so thick it could have been a standalone meal all by itself!  By saying the bottom was toasted, doesn’t really do it justice as it was more kind of a fried because it was pretty crispy.  You will just have to order it because it is a beast unto its own!

The bacon was a nice add-on and they got it right where it was crispy but still had a nice amount of grease.  The avocado was more of a guacamole that was spread on the bottom and had a great flavor.  In fact, I would advise getting these two add-ons along with the cheese.

The burger itself had a nice flavor and was seasoned right.  Instead of spreading the ½ pound of meat in a big patty, it was more concentrated and was pretty thick.  Napkins were definitely in order because it had a little bit of grease to it.  Overall, all the ingredients worked well in concert with each other nicely and the burger just had an amazing taste to it!

I was with one of my friends who participated in burger week a few months ago, and we both agreed that had we ventured to Kong’s Burgers and Wings that this burger would have been given the top prize.  In fact, this has to be the best burger that I have had in the city of San Antonio (maybe the world!)!

(Google Maps does not have them listed just yet, but if you go to the below location, you should see the restaurant across Walzem from the old Windsor Park Mall)
View Larger Map