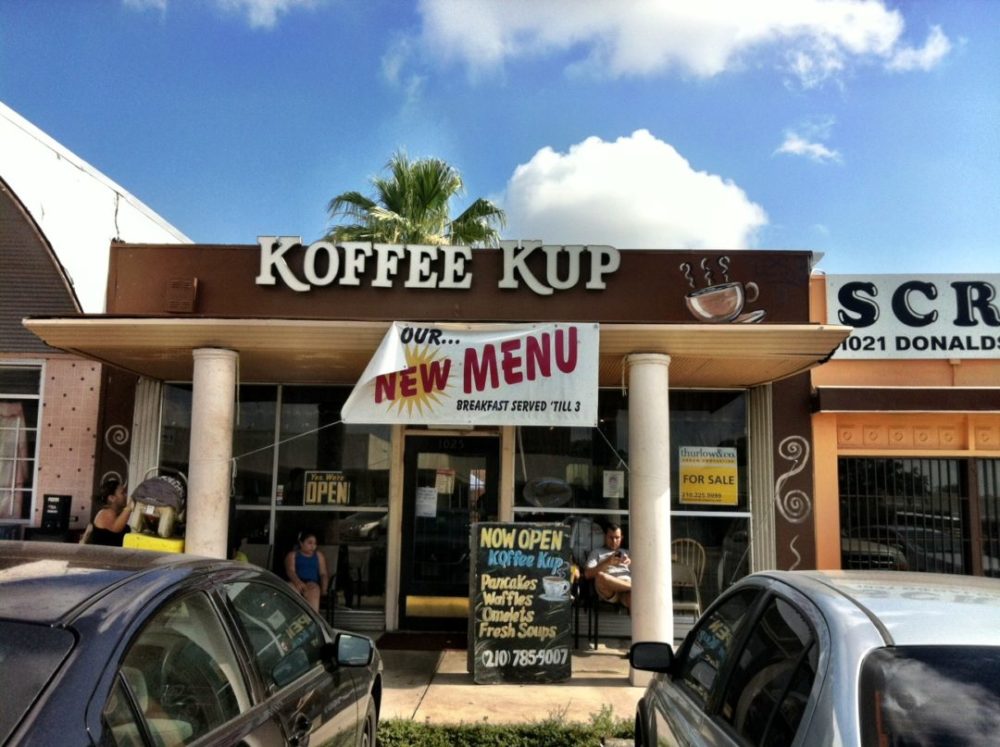 While discussing  some of the best places to grab breakfast at, local blogger and friend Angela Bartels told me that one of her favorites is a diner on the Westside by Jefferson High School called the Koffee Kup. Angela said that their pancakes were delicious and that they had a host of other breakfast foods, so I decided to check them out.

One thing that you should know about the Koffee Kup is that you better get there early on the weekend. If you were to show up after 9:00 or 9:30AM on a Saturday or Sunday morning, you are probably going to be waiting outside for a table. Situated in a strip mall, there is not much seating inside, though they do have a patio out in the back. The kitchen is at the back corner of the restaurant and the environment has a throwback feel to a short order diner.

I have been there on a couple of occasions before writing this post, and each time I had some of the best service in town. The waitresses are incredibly friendly, attentive and some of the friendliest folks I have come across. I don’t know if the Koffee Kup is a family business or not, but the level of service gives you the impression that the waitresses all have a vested interest in how the restaurant does.

I had the pancakes the first time I went and they were very good: light, fluffy and sweet. This past time I was split one whether to get a sweet or spicy breakfast. To compromise, I decided to order the French Toast, bacon and two fried eggs and asked if the kitchen could kick up the heat and make the eggs huevos rancheros. Even though this option wasn’t on the menu, the waitress said that she could make it happen.

I got three big chunks of French Toast that were very sweet – while I promised to limit myself to eating two pieces, it was so good that I had to take down all three. From the previous time I ate there, I knew that I needed to order my bacon crispy. The kitchen didn’t disappoint and I was happy to have the crunchy bacon on my plate.

The best part, however, was the improvised huevos rancheros – they were amazing. I love huevos rancheros, but I am not a fan of the runny sauce that is typical of the dish. The rancheros sauce at the Koffee Kup was different; it was nice and thick and had a great heat to it. What made it more impressive was that the sauce was made on the spot since I ordered off menu. If you go and like spicy breakfast food, be sure to ask for your fried eggs to be served ranchero style.

I was impressed by the food and service, and it turns out that their prices are reasonable to boot! Don’t overlook this Westside diner the next time you are on the hunt for breakfast in the Alamo City.

Address: 1025 Donaldson Avenue, San Antonio, TX 78228 (NOTE: There is a “For Sale” sign in front of the property; when I asked my waitress about it, she let me know that they are going to be moving several shops down in the near future to a building with more inside seating.)
Facebook: The Koffee Kup