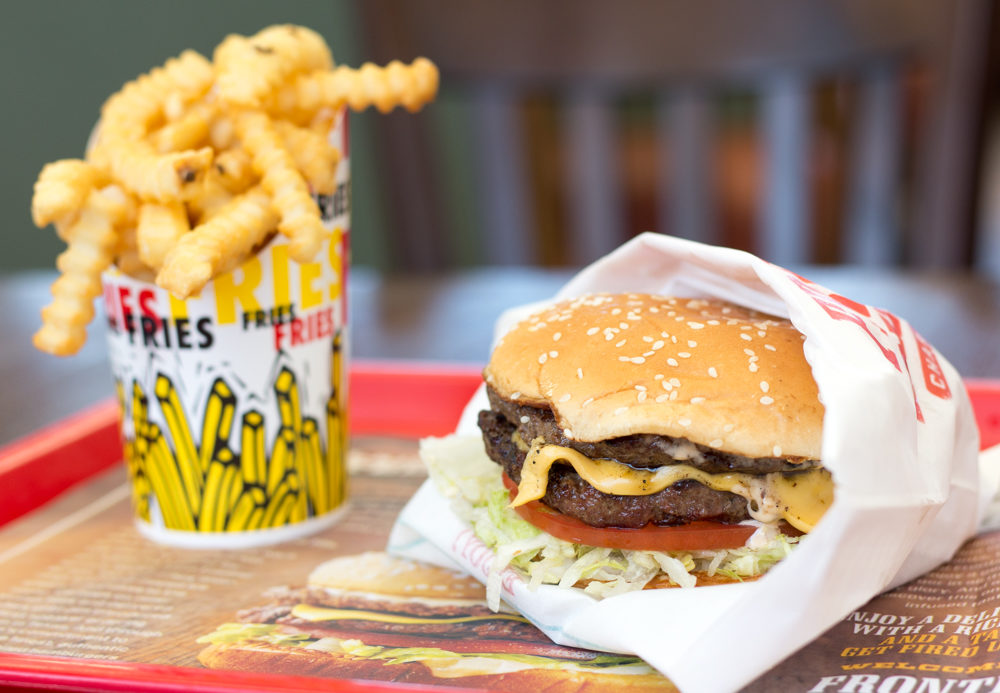 You know that old saying about where there’s smoke, there’s fire? Well, that’s true in a science kind of way, but I’m more interested in it when it comes from a charcoal grill. When you see that smoke you know something good is cooking. And as you head out on the city’s Northeast side (off of Broadway and 410), you’re gonna see a sign that—if you’ve lived in San Antonio long enough—will give you a big ole jolt of nostalgia and Pavlovian mouth drooling. Ladies and gentlemen, Frontier Burger has returned to us!

In 1947, a young entrepreneur name G. “Jim” Hasslocher (heard of Jim’s Restaurants? Of course you have—Hasslocher is that Jim). He originally sold ice-cold slices of watermelon to bikers at Brackenridge Park. When he decided to add charcoal grilled burgers to the menu, they were a hit and Frontier Drive-In was soon born.

As the business of Jim’s Restaurants grew, the Frontier Drive-Ins were shuttered. However, Hasslocher always envisioned the day when he would return to his “roots” and bring the charcoal broiled burgers that gave him his start back to life. Hasslocher passed away in 2015, but not before ground broke on the new Frontier Burger location.

Eating out my hamburger dreams at Frontier Burger ???????? I love the Charcoal broiled taste of the patties, but my favorite is the sauce on these guys… Absolutely delicious! Glad Frontier Burger is back in San Antonio. #SP #frontierburger #jimsresturant

A visit there is like a curious step back in time. The menu is classic drive-in fare, burgers, fries, shakes, onion rings and fried pies. But there’s also a twist that’s made Jim’s Restaurants a favorite among San Antonians: salads, chili and chicken (of the fried and grilled variety). But, for me, it’s always about the burgers and that unique flavor that only cooking on charcoal brings. Forgive me Hank Hill, but I like the taste of charcoal grilled meats quite a bit.

I have mentioned, oh about a dozen times in my work here, how powerful I find the connection between food and nostalgia. If you don’t remember the heyday of Frontier Burgers/Drive-In, or never got a chance to experience it, you’ll still understand that loving feeling that the city lost when the establishment went away. When you walk in, you are hit by the blending of new and old. A menu from the 1950s hangs on the wall and shows the prices from days gone by ($0.55 for a cheeseburger!) with the décor and organization of a sleek, modern operation. Tunes by the Four Seasons, Little Richard and Bobby Darin play over the sound system likes days of old.

Now, I’m a big dude and I love to eat. I can say unequivocally that this burger, coupled with an order of fries (crinkle-cut just really are better than any other version of French fry) and a medium strawberry milkshake (you’re gonna need something sweet to cut through the savoriness of a meal like this) filled me up. If you want to venture out a bit, Frontier Burger has nine separate burgers to choose from, including a mushroom and Swiss burger, bacon cheeseburger and chili burger. You’ll find something you’ll enjoy. I guarantee it. And the burger tastes like they did when you were a kid—that’s the only way I can describe them, and that is truly a good thing.

I’d also like to throw a plug in for the onion rings. They are fantastic. It’s the same onion string type you’ll find at any Jim’s location in town. In this setting though, they seem even better, probably due to old man nostalgia playing tricks on the belly. They also compliment a burger perfectly. And if you’ve got a sweet tooth like I do, you can get an over-the-top sundae or a piping-hot hand pie (cherry or apple) to go along with that shake.

If you’re in the mood for a great burger and are tired of the typical fast-food joints, do yourself a favor and swing by Frontier Burger—they even have a drive-thru for those who are in a hurry. I would hazard a wager that you too will get your heartstrings tugged by memory with your first bite through your last of these tasty burgers.

Please note: a gift card was provided by Frontier Burger to help purchase all the food. But note that Eric dined anonymously and was not given preferential treatment.