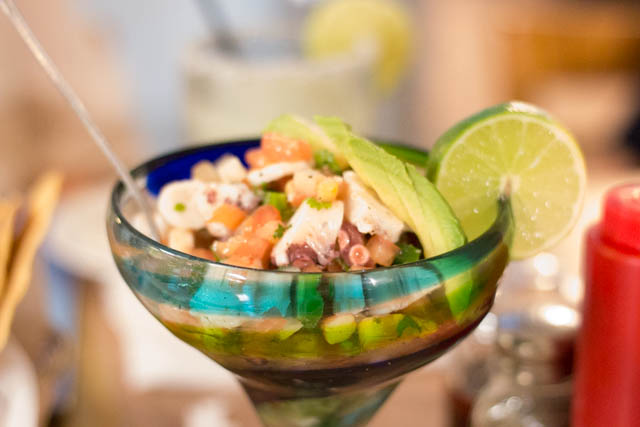 There are a few staples in San Antonio that I have not got around to visiting since moving here eight and a half years ago. Whenever someone brings them up in conversation, I cringe and hope that they don’t ask me what my favorite item on the menu is. It can be embarrassing not having a response. The feeling is similar to when several of my friends discovered that I had yet to see Top Gun and Karate Kid a couple of years ago (this was quickly rectified when my friend Marla purchased both on DVD for me and told me to watch them immediately).

While I won’t reveal all the restaurants on the list, I will tell you that El Siete Mares on the Westside was one of them. I had been by the restaurant a dozen times or more, and every time I passed by I remembered that I needed to eat there. The restaurant was brought to top of mind when their PR reps from Belle and Bold reached out, inviting my wife and I to the restaurant to try some of their new cocktails—the restaurant recently got a liquor license—and seafood dishes.

The Ceviche Costeño was excellent, a mixture of shrimp and octopus (that’s pulpo in case you run across that term in Spanish on the menu) that was marinated in lime juice and served in a pico de gallo mixture along with sliced avocados. The waitress gave us a choice of tostadas and crackers to enjoy the ceviche, and I went for the tostadas. Even though ceviche seems to be associated with the summer, it was hearty and was comforting even in January—I can imagine that this dish would be perfect when it starts warming up outside next to an ice cold beer.

On the recommendation of an SA Flavor Facebook fan, I ordered the Aguachiles de Camarón. It was basically a plate of butterflied shrimp covered in this spicy, yet tangy, green sauce and lined on the sides with tomato and cucumber. I liked making my own little sandwich, with all three ingredients on a cracker.

At this point in time, I ordered another drink, their cucumber margarita. While I have heard that this is a house favorite, it was not necessarily for me. I think it was a combination of being a little too “cucumber” coupled with the fact that the tamarindo margarita was so dang good.

Next up was a mixture of Tilapia and Camarónes a la diabla, fish and shrimp served in a red sauce and covered in cheese (this was also suggested by a Facebook fan!). While you would expect something called “diabla” to be incredibly spicy, this dish was more on the savory side, with a flavorful tomato red sauce covering the seafood while being topped with cheese.

Since my wife is pregnant, there are certain considerations that she has to make around seafood. While El Siete Mares might be a Mexican restaurant that specializes with more coastal fare, let it be known that they make a plate of nachos that any Tex-Mex fan will enjoy.

If you have a sweet tooth, you won’t be disappointed with the flan, tres leches or pastel Napolitano offerings. I loved the flan, and while I mistook the Napolitano for a Diplamatico initially, I liked that combination of chocolate and vanilla cake as well.

Co-owner Alejandro Villanueva and his team have done an excellent job of carrying on the tradition of El Siete Mares while at the same time updating the restaurant with a new bar area to go with the signature drinks. Be sure to stop by and check out them out the next time you have a hankering for seafood.