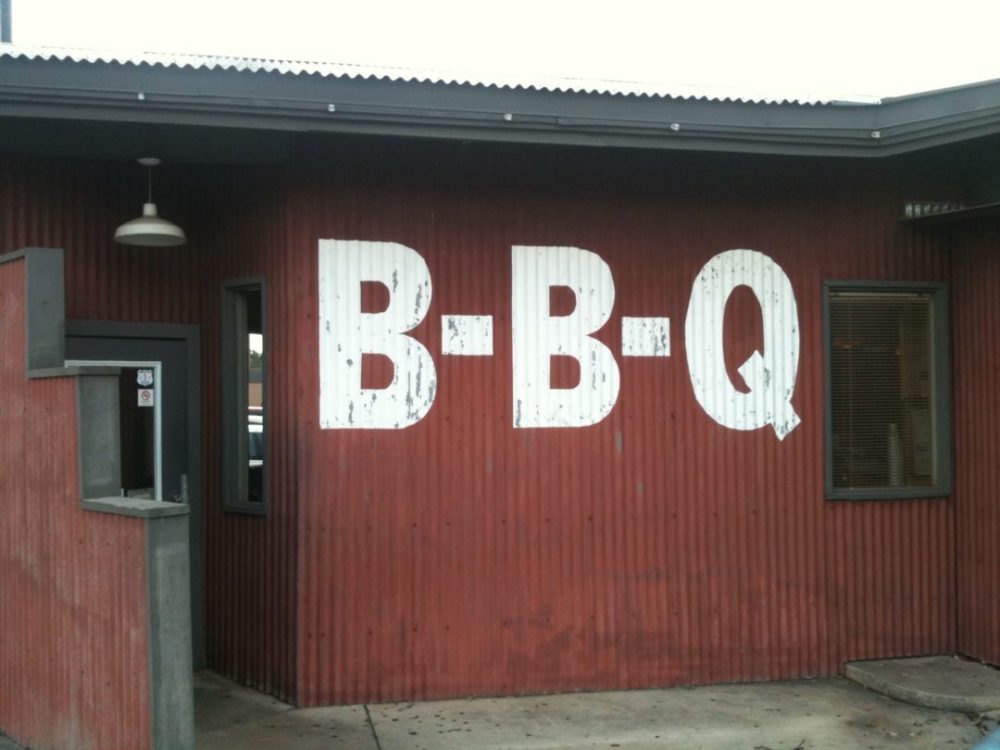 Texas is known for having good BBQ, but you have probably noticed that I have not had too many articles written about BBQ on the blog.  The reason being is that I am so surrounded by such good Mexican food that I tend to concentrate on that style of cuisine.  Well the other day, when I asked my friend where we should go eat, he had suggested the BBQ Station off of Harry Wurzbach and Loop 410.

Now, if you are going to be a good BBQ joint, you have to just have that smell as you walk into the restaurant.  Let me assure you, the BBQ Station has that smell, that special combination of meat and smoke when combined with a little bit of love and a whole lot of time makes a wonderful plate of food.  To top it off, three simple letters “B-B-Q”, were painted along the side of the building.  Right then and there I knew that I was in for something good.

For one summer, I was a resident of Memphis, TN for a college internship; those three months taught me an appreciation of pork ribs and pork BBQ.  I have had a love for them ever since, and I have always been on the lookout for good pork BBQ in Texas.  For this reason I decided to get the two meat plate with pork ribs and brisket along with potato salad and beans (which have unlimited refills) on the side.

The beans were really good (you need to add some salt) and the potato salad was excellent.  Recently, I have grown to like potato salad more and more, but I particularly like the kind that isn’t too “mustardy”.  Instead of potato salad, my friend got the cream corn which looked equally awesome (he assured me it tasted as good as it looked), so I think it is safe to say that the BBQ Station has its sides on lock down.

The brisket was good and had a nice smokey flavor.  I dressed it up with a little of their house BBQ Sauce and make a brisket sandwich that was pretty good.  I liked their sauce a lot as it wasn’t too sweet and had a good tang.

The pork ribs were exceptional and had a great smokey taste to them.  They were very tender, but weren’t just falling off the bone; personally, I like the type of ribs that have a little bit of pull to them.  The rub on the outside gave it a good flavor and I didn’t really even need to use any sauce on the ribs at all.  With the two meat plate, I got three really big ribs and one smallish rib, so they took care of me with regards to the portions.  I will tell you what though, I will definitely just focus on the pork ribs the next time I go back to the BBQ Station because they were that good!

If you are looking for some good BBQ, *choooo*choooo* baby, because that train keeps a rollin’, on down to the the BBQ Station in San Antone.

Value: 8.5/10 (I got the 2 meat/2 side plate with pork ribs that ran $9.50 with tax which might be a little expensive for lunch, but for dinner is not all that bad; they do have cheaper options, but the pork ribs are the most expensive (and worth it))
Atmosphere: 9.5/10 (Nothing fancy, but there is charm in the fact that you are in a BBQ joint that looks and smells like it should be a BBQ joint)
Service: 8.5/10 (Friendly, but really not a whole lot of frills; go up, tell the man your order, and eat!)
Taste: 9.5/10 (One of the better BBQ restaurants in town; the pork ribs are delicious and so is the potato salad!)
Website: http://www.barbecuestation.com/
View Larger Map