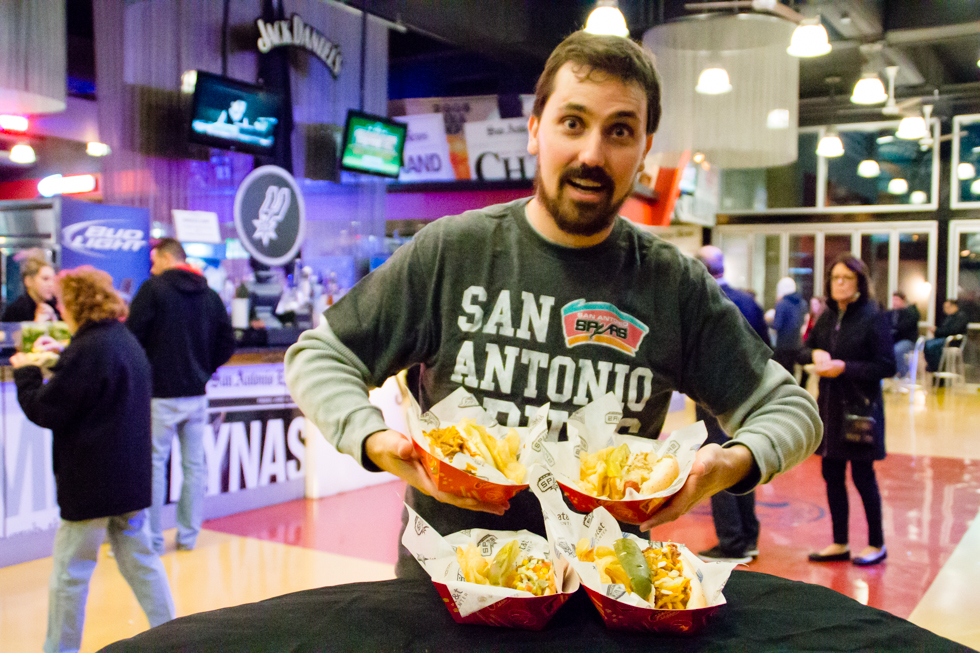 There are two things that all San Antonians love: the Spurs and good food. Fortunately, you can get both at the AT&T Center. This year I joined the Spurs Family, splitting season tickets with a good friend to cheer on the team as they make a drive for five. I have been impressed with many of the food options at the stadium, and I wanted to highlight some of my favorites, including the best nachos of all sports. Check out the video (sorry about the audio, I know that I need to invest in a mic!) along with some of the pictures from the game on December 23, 2013 against the Raptors!

Entering the stadium from the Southwest corner, you’ll find yourself at the Jack Daniel’s Club with the Old No. 7 Barbeque restaurant. This is the gate that I always enter to go to the game and you will see this man chopping up some brisket.

They have one of the best BBQ values in the city, a three-meat, two-side plate for less than $10!

Here’s another look at this plate, full of brisket, turkey and sausage. I highly recommend the potato salad – it is the secret recipe of the head chef Andrea Previ.

You can also get homemade potato chips and BBQ sandwich that you can top with one of many signature Jack Daniel’s BBQ sauces. This turkey sandwich had the peach sauce and I am also a fan of the spicy one.

When I lived in Memphis, I always enjoyed getting barbecue nachos at the Redbirds games, so I was happy to see this San Antonio version made with chopped brisket, beans and queso blanco. At a cost just slightly higher than normal nachos, this plate is a deal!

If you are looking for more traditional nachos, make your way up to the H-E-B Fan Fiesta zone in the upper bowl.

There you’ll find the best nachos in the entire sports world, the Fiesta Nachos. Made with your choice of meat and beans, along with all the fixins (guacamole and sour cream come standard and the jalapeños are hot, hot, hot!), you’ll wonder why you ever settled for normal nachos. Note: I tend to favor the melted queso rather than the shredded cheese.

A new edition to the Spurs gastronomical choices is the artisan grilled cheese sandwiches at the Big Cheese stand. The bacon tomato sandwich was tasty…

…but if you are looking for something a little more unusual, give the “Double Pig” a shot. Made with pulled pork, smoked bacon, fried onions along with Provolone and American cheeses, one bite of this sandwich will make you glad you aren’t a vegetarian.

But my favorite had to go to the Buffalo Chicken grilled cheese; fried chicken tenders sandwiched between gooey cheese and a savory sauce made for an unexpected, but delicious, sandwich.

A typical ballpark frank and mustard got you down? Give the Top Dog stand a try. They offer an assortment of gourmet hotdogs, including the San Antonio Dog, made withe corn pico de gallo and jalapeño aioli.

The Cincinnati Dog is your typical chili cheese dog; the only difference between that and the Coney Island dog is that this one has onions on it.

The New Yorker dog is topped with sauerkraut and spicy mustard.

Finally, what would a game be without a beer? My favorite spot to grab a brew is up in the H-E-B Fiesta Zone where there bartenders really dress up the Dos Equis beers right, putting a good amount of fresh lime juice in the beer along with coating the side with salt.

Did I miss your favorite food to order at the Spurs game? Be sure to let me know in the comments and GO SPURS GO!