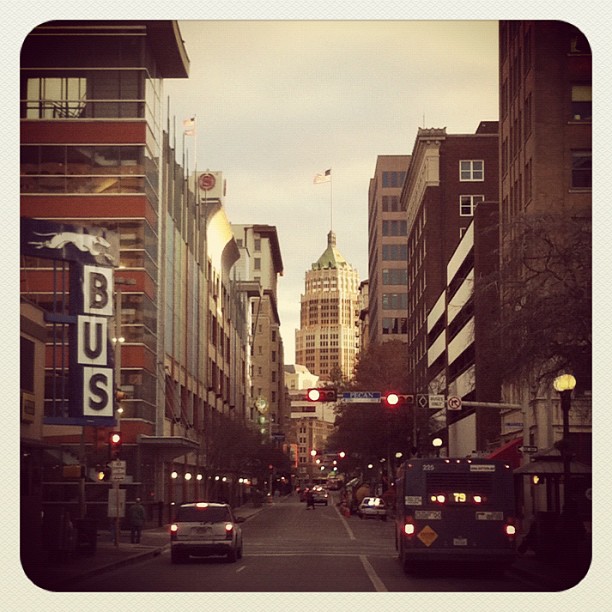 There was an interesting piece by Callie Enlow on the Rivard Report (the recently launched blog/website former SAEN editor Bob Rivard) that talked about Why People Leave San Antonio. This article was an insightful look at why people move to a different city, and while I can agree with some points there are others that I feel she missed.

Enlow is on point with the types of jobs that are available in San Antonio. While we are looking to net roughly 275,000 jobs by 2022, she cites a report that only a small amount of them (25,000 – 50,000 jobs) are what she terms “knowledge based.” While this may be what the reports are saying, there is a shift that is happening to the urban core that is going to be a huge draw for jobs and people.

In the Pearl complex, condos are going up quicker than the city’s collective BAC during Fiesta. But the Pearl is just the beginning. Go a couple of blocks East to Broadway and you will see other apartments/condos being built. Go a couple blocks South to Quincy and there is more construction. With all this construction in the core, San Antonio is setting itself up for an urban renaissance similar to that seen in Fort Worth.

While the urban construction is a way to jumpstart interest, the next wave of jobs in San Antonio looks to be in the startup community. Just as TechStars ignited the Boulder scene, TechStars Cloud and Geekdom look to do the same to the Alamo City. If past is prologue, this shift can happen rather quickly, and in fact it is happening now.

With Rackspace being an anchor to the burgeoning tech community, the low cost of living and the willingness of movers and shakers like Graham Weston to provide an outlet like Geekdom for the tech/entrepreneur community, I predict that this city will see some amazing growth over the next three to five years. Growth that will be far more than the formal reports and research are predicting.

Enlow’s second point, that it is “downright impossible to find enough likeminded individuals for friendship, professional partnerships, or romance” rings hollow. This is the same reason that I get frustrated with shortsighted people who plaster the “Keep San Antonio Lame” bumper stickers on their cars (although I do find the actual stickers amusing). The only thing keeping San Antonio lame is the people who can’t see what is right in front of them.

San Antonio has every bit of the variety of things to do in cities like Austin, however, it is not blatantly thrown out in front of you. While there may not be a concentration of venues like 6th Street at present time, there are tons of great places to hear live music. Our art scene is world class with contemporary galleries congregated in one place like Blue Star and other galleries along the South Flores area, not to mention the very unique Artpace. This is all in addition to the more stately McNay Art Museum and San Antonio Art Museum.

The culinary scene has some of the best hole-in-the-wall restaurants anywhere around coupled with a group of restaurateurs/chefs who are producing some amazing food. The waistlines of San Antonians can attest to the quality of the food in our city; however, with the advent of ambitious park and trail systems like the Leon Creek and Salado Creek Greenways, even that is changing. Our city is getting more fit.

Meeting people is challenging for younger people in a post-college life in almost any city without a dense urban core. It comes down to the fact that you are being removed from a large, diverse population where you can choose friends just as easily as getting a piece of pizza from the $6 CiCi’s buffet, and thrown into the working world where you have to be proactive to make new connections. For those of who are non-married without kids, this can be difficult.

Fortunately, being in a big city can temper this. Have a passion? Find a Meetup. Are you entrepreneurial and love software? Join Geekdom (ok – yes, it’s another shameless plug, but I am a proud member of this organization). Enjoy races and marathons? Join a running group. Like to drink? Go to a bar. Want to run and drink? Join a pub run. Want to drink and learn about the Lord? Check out Beer and Bible Study. With a city the size of San Antonio, there are many groups to explore your interests (or combinations of interests).

Yes, the public transportation isn’t the greatest, but the city is laid out in a way where traffic flows pretty evenly (outside of rush hour), and there are typically several different ways to arrive to a destination. I wonder if any of the people who complain about the public transportation have ever been on a Via bus. When I served on jury duty, the express bus from 1604 and I-10 to downtown was fast and had Wi-Fi. Additionally, Via does a great job with having park and ride service to many of the major events (such as Fiesta). I’m not saying that they have everything figured out, but the bus system is not the worst in the nation. The blue and red trolleys are an easy way to get around downtown and the San Antonio Bike Share is an option for residents to ride from Pearl to South Alamo.

The point is there is plenty to do in San Antonio and that should not be a reason for anyone to leave. The people, culture, neighborhoods, food and ethos are all amazing. Yes, I might leave this city for an opportunity that’s not available here, but it had better be a damn good one. Viva San Antonio.

Note: I have not been active on the blog because of the fact that I have recently taken a job in a field that is completely new to me, am in the process of getting married in May, moving out of two houses and into one and trying to start a business. Needless to say, it has been busy, but I look forward to blogging more once June gets here.