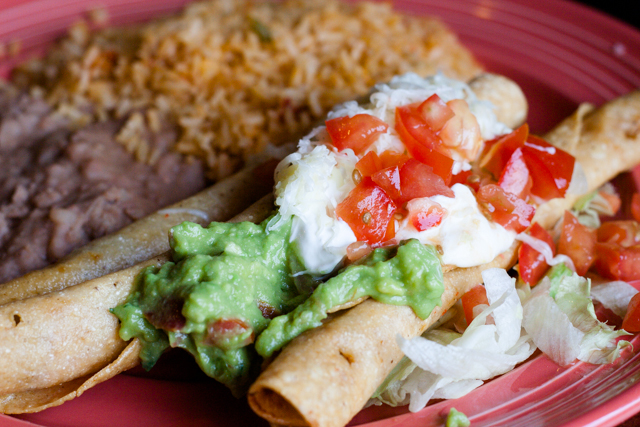 Have you noticed that when you move to a new place, or frequent a city on business, that you immediately gravitate to a particular food or restaurant? This happens to me often – living in Seville it was the tortilla Española, interning in Memphis it was Corky’s BBQ and consulting in Oahu it was coconut shrimp. Finding a favorite is one part exotic (it is something that you typically haven’t had before) and another part familiar (in the world of new opportunities, it is the one thing that you can fall back on knowing that you will be satisfied). Las Palapas filled this role for me when I moved to San Antonio.

My first apartment was at 1604 and 281, and right around the corner was Las Palapas. When I first moved in that they had this ridiculous special called the “cheesy” (not cheese) enchilada plate with an iced tea for five bucks. It was a typical cheese enchilada, topped with the brown gravy, but then they blew my mind by putting a scoop of queso on top to make it even cheesier. This was also where I was reintroduced to sweet tea, a staple in Memphis, and I would often have to cut it with regular tea for fear of a massive sugar crash.

Las Palapas and the cheesy enchilada plate was my San Antonio comfort blanket. No Monday Night Football game was complete without cruising over to the Sun Harvest, picking up a bomber of Carta Blanca and getting Mexican food. I ate at Las Palapas so much that I had a relationship going on with the drive-thru girl; our conversations would carry from one week to the next. The day finally came for me to move out of the apartment and into a house in another part of town far away from Las Palapas. While my cholesterol improved, I did miss the drive thru where everybody knew my name.

Then it happened, one Monday night after living in my new digs I decided to make the trek to Las Palapas. I placed my order for cheesy enchiladas, paid a person at the window I didn’t recognize and got a bag of Tex-Mex goodness. Unable to contain my excitement, I opened up the tray in the parking lot to get a sneak peek at the several-thousand-calorie meal and realized something was wrong. The cheesy enchilada didn’t have any gravy on it.

Assuming this was a simple mistake, I went back through the drive thru (no one was in line) and talked to the employee who manned the spot that was once held by a familiar face. I told him the situation, to which he responded, “The cheesy enchilada doesn’t come with gravy.” I went on to tell him this story, that I was a regular for two years, how I came there weekly and that each time the cheesy enchilada had gravy, to which he replied, “I have worked here five years and there was NEVER  gravy on the cheesy enchilada plate.”

It was the classic immovable force and the unstoppable object situation, but with the football game about to start, I asked for a side of gravy and moved on. I visitied the 281/1604 Las Palapas only a couple more times and realized that attempting to order the cheesy enchilada plate that I once knew and loved was more trouble than it was worth. I tried other Las Palapas restaurants, but they didn’t even know what I was talking about when I ask for the cheesy enchiladas—“You mean cheese enchiladas, mijo?” Frustrated and sounding like an old man talking about the-way-things-used-to-be, I found it easier to avoid Las Palapas than to eat there.

Which was a damn shame because their food is so good.

Fast forward to last week. San Antonio Jane had met up for an appointment and decided to get lunch together. Driving back to work, I saw the Las Palapas sign and suggested we stopped there; this was much to her delight because she loves their breakfast tacos. As we munched on their chips and salsa, which is in the pantheon of the sum-is-greater-than-the-parts chips and salsa (you know what I’m talking about, where maybe the salsa is good, but in combination with the chips it is out of this world), I decided that instead of going through the whole cheesy enchilada ordeal, I would take a deep breath and order the lunch special, Mama Ruth’s flautas.

The flautas were exceptional. The tortillas were packed with chicken in spite of being tightly wrapped. The outside was very crispy and as you bit into the flauta it would snap off in the same vein as munching on a biscotti. There were healthy dollops of sour cream, guacamole and white cheese on the middle of the flautas. Keeping in line with my memories from long ago, the refried beans and rice matched perfectly with their flour tortillas. Las Palapas recognizes that the staples are as important as the entrée and this trip proved no different.

There will always be a part of me that pines for those cheesy enchiladas, and the association between them and being a freshly minted graduate, working in a new city and starting out on a fresh path into the world. I can hope that Las Palapas will someday put them on the menu again, making sure that gravy is included. Until then I am going to enjoy other things they offer instead of trying to recreate the past. There’s always adventure when you try something new.