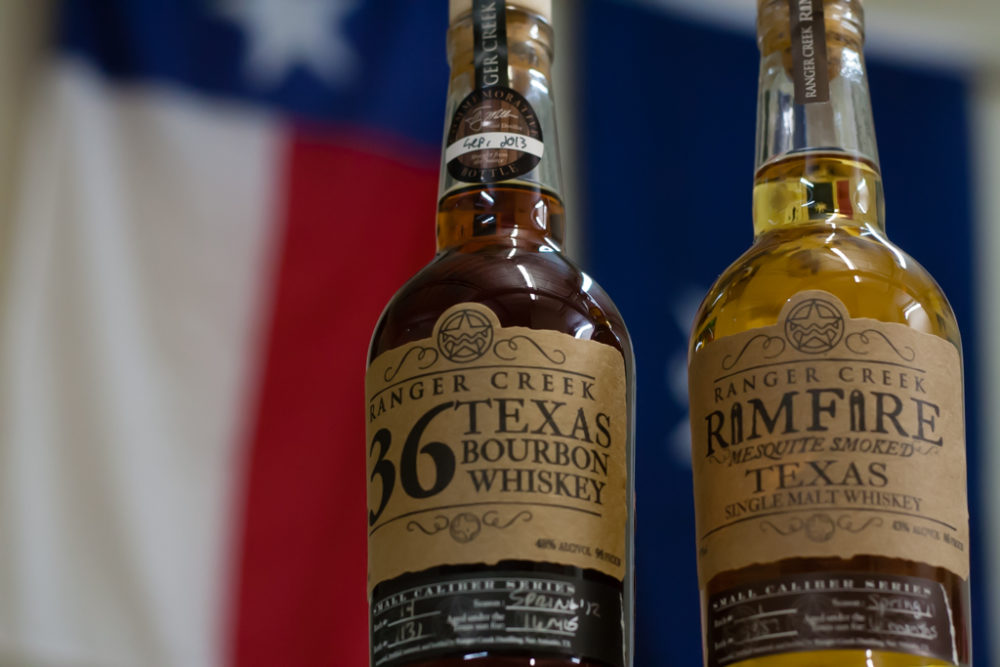 You may have seen my article on the Rivard Report about the state of craft distilleries in and around San Antonio. Towards the end of the article, I reference a controversy about what constitutes a Texas whiskey. In particular, there are three whiskeys that are produced in the area: Ranger Creek’s .36 Texas Bourbon, Garrison Brothers’ Texas Straight Bourbon and Rebecca Creek’s Fine Texas Spirit Whiskey. Yes, that is right. I did say Texas Bourbon. It is a misnomer that bourbon, a type of American whiskey, has to be produced in Kentucky. In actuality, it can be produced anywhere in the United States if it adheres to these requirements (namely that corn is 51% of the grain mixture).

Each of these whiskeys carries “Texas” in their name and each of these distilleries carry the Go Texan seal that is certified by the state’s Department of Agriculture, so what would be the controversy? The discussion of what makes a Texan whiskey comes down to semantics. Is it that the majority of ingredients have to be from Texas? Does the majority have to be distilled in Texas? Should the whiskey be aged for the majority of its life in new charred oak barrels in Texas? Then, if it is a blended whiskey, which of these factors should matter the most and what constitutes a majority? This kind of confusion is nothing new to alcohol produced in Texas, in fact, it continues to this day in the wine industry.

There are many different factors that go into creating the taste of a whiskey, including the quality of ingredients used to make the mash, the amounts of each ingredient and the types of materials used to age the whiskey. But one of the most important factors when aging a distilled spirt is climate, which also happens to be the factor that is completely controlled by the geography of the place producing the whiskey. In their article, The Science of Aging Whiskey the Economist notes:

Either way, the liquid lost through evaporation is known as the “angel’s share”, and is unmistakable to the nose of anyone walking into a whisky warehouse. During the first year, up to 8% of a barrel’s contents is lost to the angels. After that, the figure is roughly 3% a year. Far from being a loss to be regretted, however, this heavenly tithe is an indication that all is well.

As the temperatures rise and fall, the liquid expands and contracts through the wood in the barrel, passing through that charred layer. This process is what imparts a particular flavor to the whiskey as it absorbs some of the qualities associated with the wood and turns from a clear liquid to having that beautiful copper color. Aging takes longer in a cooler climates—in Scotland it could take eight, twelve or twenty years to produce a barrel of Scotch whiskey—a warmer Kentucky temperature might only take two, four or six years to age a barrel of Bourbon whiskey. Because a location’s temperature is a major factor in the aging process and flavor profile, I feel that a whiskey must must be aged the majority of its life in our great state to be considered “Texan.”

Distilleries like Ranger Creek and Garrison Brothers produce what is called “grain-to-glass” bourbon. This means that the entire process, creating the mash, distillation and aging is done in house. Critically, their whiskey is being aged in the hot and humid South Texas climate, ultimately giving it a character that is unique to our area. The Ranger Creek team is learning firsthand how San Antonio’s climate impacts the aging process. The group initially used five-gallon barrels to age their whiskey and lost between 20 and 25 per cent due to evaporation. They are now attempting to determine if it is even feasible to let a more traditional large barrel age in our climate—while the angels might be happy with their share, there might not be enough whiskey left over for Ranger Creek to sell.

This is in direct opposition to the Rebecca Creek Distillery and their Fine Texas Spirit Whiskey. In doing research for the story, I found that a eight-year-old whiskey is brought in from out of state and combined with their locally distilled “white dog” (a non aged whiskey) and a whiskey that was aged for a year on site. You don’t have to be a mathematician to understand the formula that time = money. By offloading the aging process to another distillery, the business is able to get a product to the market almost immediately as opposed to waiting for the whiskey to mature. This is definitely a savvy move to help a fledgling business, but it is one that produces something that is not completely Texan.

Let me be clear, I don’t have a beef with Rebecca Creek or their Spirit Whiskey. In fact, I gave the ushers at my wedding a flask of Rebecca Creek Spirit Whiskey as a thank-you gift and have enjoyed drinking it on multiple occasions. As an aspiring business owner, I am empathetic at how hard it is for entrepreneurs to create a successful business and understand how you have to be scrappy if you are going to have a chance at making it. Furthermore, I feel that there is a time and place for all different kinds of alcohol from all different points of origin. Hell, what fine whiskey drinker doesn’t occasionally enjoy a Crown and Coke and what beer aficionado won’t drink a Lone Star tall boy at a concert at Floore’s Country Store?

But in my opinion, if a whiskey is not aged the majority of its life under the hot Texas sun, it is not Texas whiskey. This may seem nitpicky to some, but the fact is that labels influence customer behavior. How many times have you picked up a new bottle of wine because of an interesting design? Or a six pack of beer because it was from a particular country? I enjoy the Spirit Whiskey from Rebecca Creek, however, with the major aged component being brought in from out of state, I feel a little duped into thinking it was truly Texan. Changing the label from “Fine Texas Spirit Whiskey” to simply “Fine Spirit Whiskey” could alleviate any future confusion.

You can read the original article about craft distilleries in and around San Antonio on the Rivard Report.