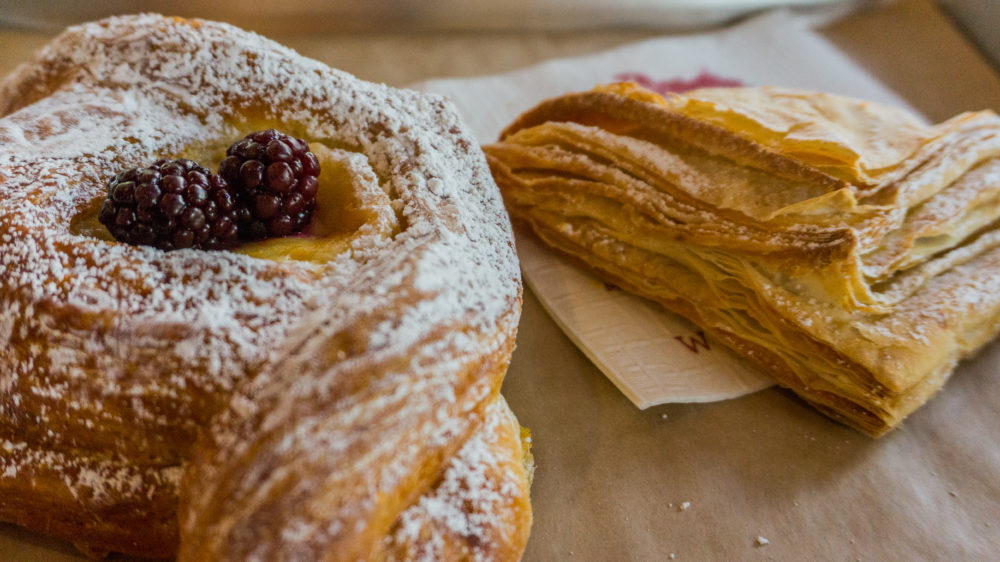 In my family, pan dulce is a big deal. Its presence on the table was, is and always will be a necessity. In fact, if you sit at my Grandma’s table and hear someone ask for the “medicine bag,” they won’t be passing along an assortment of prescriptions—instead inside the little white paper bag, you’d find conchas, orejas and empanadas from the local panaderia. Pan dulce has healing powers at my house. With this background in mind, it should be no surprise that my bread-loving nose found its way to the artisan bakery, La Panaderia.

A number of you might be familiar with La Panaderia’s Broadway location, which opened back in 2014, but what you may not be aware of is the relatively recent opening of the breadmakers’ second location downtown. Right beside the CodeUp school on the corner of Houston & Navarro sits the modern and oh-so-conveniently placed bakeria, pasteleria, and loncheria.

Somehow La Panderia feels both hip and traditional. You can find tourists and local professionals alike in the self-service line to grab their conchas and tortas. The rather large restaurant buzzes with conversation and laughter—it feels warm. There’s an assortment of family style seating, couches, and traditional cafe tables all around.

I started my lunch with the Mexicana Cubana. This filling torta features two slices of ham, bacon and sausage, topped with pickles and swiss cheese, along with two healthy helpings of cilantro mayo and chipotle mustard. You can choose from a few different types of bread, which is made fresh daily. I opted for the familiar birote. The bread was perfectly toasted and had no issue holding together this hearty sandwich. While the combination of the three meats was delicious, it was the cilantro mayo and chipotle mustard that stole the show for me! No real heat in the sauces, but a very full flavor. Be advised, La Panaderia’s tortas also come with a soup or salad, so come hungry! I chose to add a warm bowl of fideo to my meal, which was the only part of the afternoon I wasn’t crazy about. While it had a good flavor, the soup was more reminiscent of a plain tomato soup than the fideo I’m used to. There were a couple of carrots, squash and even a few potatoes in there to my surprise. But overall, it was a great lunch! I still ate every bit of my soup and my torta was heaven in a birote bun.

After taking a quick breather to recover from my Mexicana Cubana, I jumped back into the self-service line, picked up my tongs and charola and prepared for Pan ArteSano (artisan and healthy bread).

The pan dulce selection is quite large. There’s everything from Rosca de Reyes and conchas to bowties and bear claws! I can vouch for a majority of the menu items in this particular section; I’ve stopped by to pick up a “medicine bag” for my coworkers a few times before, and I haven’t tried a pastry that I don’t like.

My only gripe about getting pan dulce here is they are a little on the pricey side and the actual prices aren’t listed right next to the pan while you’re choosing. The board of prices is listed to the left (away from where your natural focus would be) at the end of the service line. It’s not a huge issue, but definitely something I noticed. At the end of the day, I enjoy the pan so much and it’s made with such high quality, I don’t mind paying the higher prices when I treat myself to La Panaderia.

During this trip, I opted for the blackberry croissant—one of my favorites—and guava empanada. The croissant was delightful, as usual. The buttery and lightly sugar-coated bread was rich and a perfect combination with the sweet blackberries. I love this pastry and always make a point to put it in my medicine bag. Second on my plate is the guava empanada, which I hadn’t tasted before. I’m used to an empanada being a little thicker and having a focus on the filling, but this was different. The thin layers of flaky bread were a show stopper. The guava filling was a nice change of pace and was just the right amount of sweet. But honestly, I wouldn’t have been upset if I found no filling at all. The bread was so airy and light paired with a healthy dusting of confectioner’s sugar to top it off, this empanada (guava, apple, or otherwise) is a pastry I’ll be coming back for.

There’s a separate counter for drinks where you can order coffees, teas and apparently aguas frescas. Although, when I asked the barista what type of aguas frescas they had available, she informed me that it was actually just lemonade. I got the lemonade with my torta and I had a Cafe Miel with my pan dulce, which is a latte with honey and cinnamon. Say goodbye to pumpkin spice, this latte will be on my list when it’s no longer 105° outside.

The staffs’ shirts read, “Save our Cultura! Eat pan dulce!” and I’m more than happy to oblige. Consider me a companera, La Panaderia, I’ll see you again soon. If you’re in the downtown area or can drop by the Broadway location, do something nice for your coworkers or family tomorrow and treat them to a “medicine bag.” And don’t forget the blackberry croissant and guava empanada!