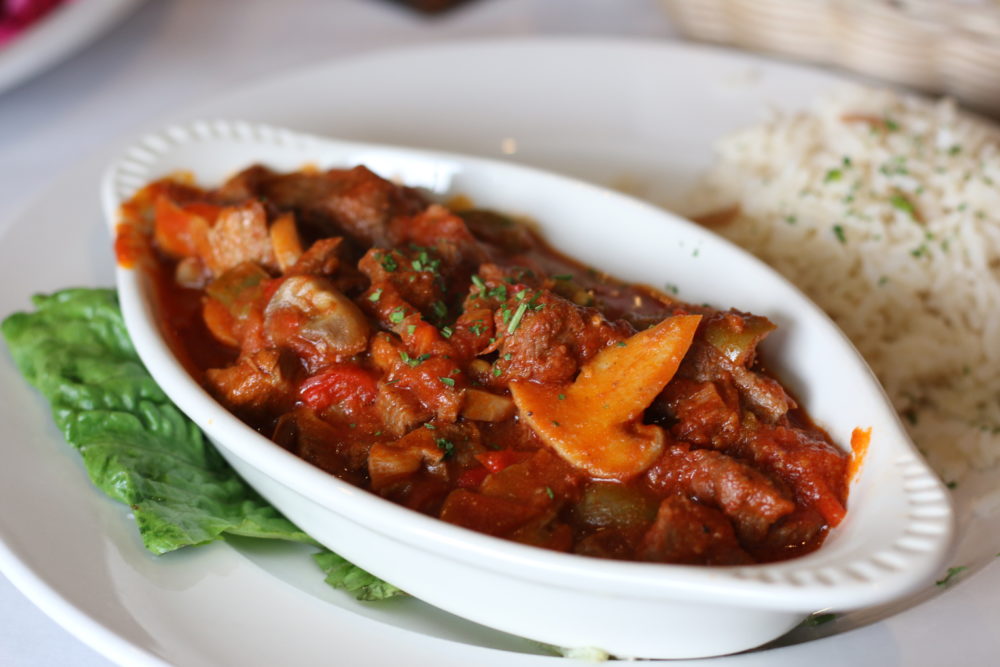 Long time restaurants that deliver exceptional food and service are sometimes easily forgotten. Especially with the proliferation of flashy foods that are designed to be consumed on Instagram instead of a dinner among friends. Fortunately, there are restaurants like Turquoise Grill that seems less concerned with being “on fleek” as opposed to being on their game. And that’s something that’s worth writing about.

Turquoise Grill is located in an unassuming strip mall at Fredericksburg Road and Loop 410 in a shopping center that has a pawn, gun and tax prep shops. While the outside leaves something to be desired, the interior boast bright red and yellow walls with paintings and relics of Turkey. The back wall has a flat panel TV that shows a loop of cities and landscapes of the country. While screens are often a scourge to a meal, this one adds to the experience, serving as a conversation starter for planning an exotic trip that may someday be taken.

The sounds of the restaurant are unlike most that you’ll find in San Antonio. Instrumental jazz is piped in over the speaker and the Turkish language fills the air, causing your ears to perk up. I forgot that I was actually in a San Antonio strip mall.

Our waiter, Hasan, was a truly marvelous host, offering us some suggestions for our meal and giving us background into his life’s story; Dos Equis should have cast him as their new most interesting man. Hasan has studied medieval history in Germany, traveled to Syria before the war and worked in an Alaskan fishery before landing as a server at the Turquoise Grill.

The meal started out with a very thick pita bread along with some oil and spices. We ordered a side of hummus and a sigara boregi, which was a rolled piece of dough filled with feta cheese and fried—it was almost like a Turkish crab Rangoon. The hummus was terrific but the sigara boregi was a little too salty for me, the only miss of the night.

My wife ordered the Doner kebab, what the menu called the “famous Turkish specialty.” The plate was filled with thin slices of the lamb that was prepared on a vertical rotisserie and the plate was filled with a mix of fire roasted tomatoes and pepper. It was served on a bed of rice pilaf that my wife (who is extremely picky about her rice and has invested in one those fuzzy logic rice cookers) declared was the best rice she has ever had.

I had the lamb Tava, a dish filled with chunks of meat, tomato and mushrooms. It was kind of like a stew served on a bed of that outstanding rice. This is the meal that I will come back for when we have one of our cold snaps.

For dessert, I went with the Kazandibi, a baked custard that was carmelized on top and dusted with ground up pistachios and cinnamon. Hasan told us that the Kazandibi at Turquoise Grill was even better than some that he’s had over in Turkey. It was extremely rich and was a great way to finish the meal; I was considering ordering us a slice of their chocolate cake and making a kind of impromptu Diplamatico, but decided I could only eat so much!

The meal ended with Hasan offering to serve us some Turkish tea, a traditional way to conclude dinner. Hasan brought out the tea on a beautiful serving dish and it was served in the traditional tulip cup—a blog mentioned that the shape is “designed to cool the upper part of tea fast while keeping the lower part hot.” It was a fitting ending to our meal.

Admittedly, I’m like anyone else and get sucked into the trappings of the latest restaurant openings and Instagram-able foods that are visually arresting. But the experience at the Turquoise Grill reminded me of how important it is to choose restaurants that have been built on years of substance instead a moment of flash.

Special shout out to former SA Flavor intern Stephanie Hall who gave me a gift certificate to the Turquoise Grill at the conclusion of her internship. I’m so sorry Stephanie that it took me so long to make the trip, but I’m so thankful that you introduced me to the restaurant. I promise I won’t take four years to visit your next suggestion!