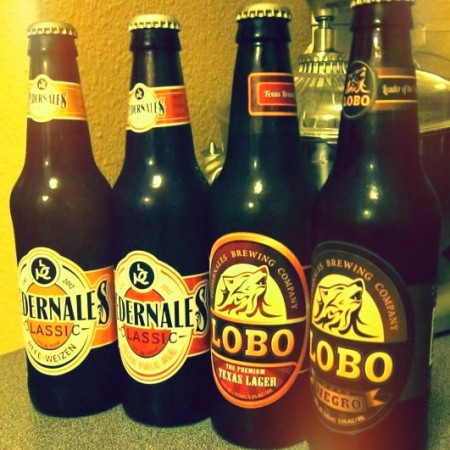 Hailing from Fredericksburg, TX is the fledgling Pedernales Brewing Company. The brewery was started by serial entrepreneur Lee Hereford who has had success both in the wine industry as well as publishing the San Antonio area Travel Host where he routinely featured local businesses instead of chains, “If you’re staying in a hotel in San Antone, why would you want to shop at Dillard’s and eat at Chili’s?” he asks. Both Hereford’s network with restaurants and his passion for the area found led to the creation of the brewery.

“I enjoy drinking beer, and I knew that if I could create bring to market a good product that was fairly priced, people would buy it,” Hereford says.

Not having experience with the production of beer, Hereford turned to former UTSA fermentation sciences professor Dr. Paul Farnsworth for advice. Originally wanting to start the brewery in 2003, it wasn’t until 2009 when the pieces started falling together. Hereford was going to hire Farnsworth to be his head brew master, however, Farnsworth fell ill but was able to suggest Peter McFarlane to become the brew master.

McFarlane has a lot of chops with the fermentation sciences, a graduate of the Siebel Institute with a Masters degree in Fermentation Science, he has worked at major breweries (Leinenkugel), operated his own micro brewery and was last making wine in Napa Valley. As the head brew master, McFarlane oversees production of four styles of beer: Lobo (based on an American pre-prohibition recipe from 1910), Lobo Negro (German black lager recipe of 1950), IPA (1947 English recipe from Dr. Farnsworth’s collection) and a Hefeweizen (McFarlane’s own recipe he created 25 years ago).

Read more about the beers from the review by Wesley Craig of Wes’ Cravin’s.

Hereford wanted to make sure that his company and beer paid homage to the area that they were brewed in. The Pedernales Brewing company is named for the river that is South of the brewery. When looking for a flagship name, Hereford wanted something that was short, punchy and easy to order; “Lobo” fit the bill and was representative of the wolves that inhabit the Hill Country and Southwest.

While they are currently making 6,000 case equivalents of beer a month, by October of next year the company is looking to brew over 20,000 case equivalents. But the increase of beer is not the only thing that Hereford is looking to do. The Ladder series will be introduced in June of 2013 and $2/case will be donated to support volunteer fire departments in small towns with less than 10,000. Over the next five years, Hereford wants to add a Light and Bock style to the Lobo line along with a Porter, Stout and Red Ale to the classic line.

“I want to make a beer that tastes like ‘another one,’” Hereford says instead of having a “one and done” craft brew, he wants folks to enjoy the beers of Pedernales Brewing company so much that they order another one. Readers can grab a Pedernales Brewing Company beer at both Spec’s and local spots such as The Friendly Spot, Joey’s, Joe Blues, Tycoon Flats and the Roaring Fork and be a judge for themselves.

Read more about the beers in a previous article.