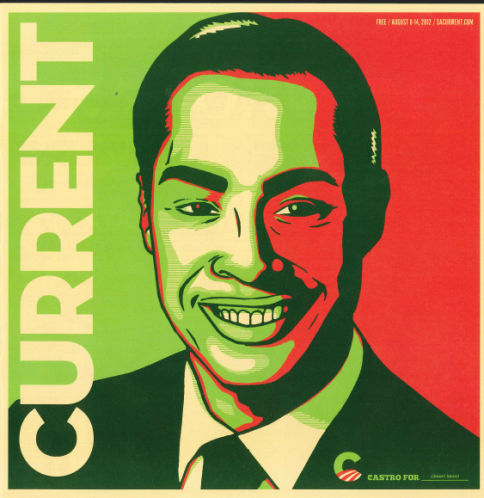 Yes – this is a food blog, but recently it has begun morphing into telling stories as much as food. It has begun turning into something more about San Antonio than just an Average Joe’s take on food. After watching the Democratic National Convention tonight, I was on the fence about whether I should write something about Mayor Julian Castro’s speech. I have purposefully avoided political discussions on this blog (save talking about SOPA), but when the mayor of your city gets a moment to speak in front of the nation in prime time, I think that it is something worth talking about.

While the speech started out with a feeling of being a little over rehearsed, Mayor Castro quickly hit his stride. He did a good job of bringing San Antonio into the national conversation and telling his American story. I don’t care who you are, it is inspirational and part of the American dream that a woman who cleaned houses for a living could have a grandson deliver the keynote address for a major party’s convention. The story of Julian Castro is one of those “made in America” tales that can inspire anyone, regardless of which party line you toe.

Castro did a good job of bringing San Antonio into the public spotlight – he talked of the rugged individualism of Texans, gave a shout out to Thomas Jefferson High School, touted his plan to give four-year-olds access to Pre-K education (which was backed by seven previous San Antonio mayors of various political ideologies) and told the nation that San Antonio had the top performing local economy. With such a short time and many topics to cover, I was pleased with how he worked San Antonio into the conversation.

Now time to get a little political – but not in the sense that you might think. I’m not taking sides as much as dissecting what a good keynote must have in it to see if Castro’s fit the bill. First, it has to have an American story as well as representing your hometown, which Castro quite well. It then needs to have a catchy slogan, which I think he did effectively with “Opportunity today, prosperity tomorrow” (in fact, I think this is superior to either candidates slogan). Third, you got to inject some humor to get people to like you; the quip about Texas being one of the few places where people still have boostraps was particularly good.

Fourth, you have to have a good call-and-response section to involve the audience. Generally this is when you get them to yell out either “Yes” or “No” repeatedly after a catch phrase. Check – the mayor got the crowd going. Fifth, you have to be the attack dog of your party on the opposing candidate. Having seen a well measured Castro in public office and even at some of the mayoral debates, I didn’t know if he had it in him, but was surprised. Calling Governor Romney a good guy and then saying, “He just has no idea how good he’s had it,” referring to it as the “Ryan-Romney” plan and the ultimate piece of trickery of asking the audience, “When it comes to expanding access to good health care, Mitt Romney says, ‘No,'” and then saying that the Governor once said “Yes” only to change to “No.” Finally, you have to sell the guy who is headlining the ticket, which Mayor Castro most certainly did at every opportunity that was available.

Tomorrow (and tonight) the fact checks will begin, analysts will diagnose every point in the speech and Mayor Castro will be under the microscope in a way that he has never been before. Yes, the mayor was the speaker at the Democratic National Convention, which may cause some of my readers to cringe, and others to be appalled that I would write about it. Of course, Castro was there to pump up his candidate, however, looking at the larger context he was able to draw some of the national spotlight to our city, and that voice will extend well beyond the convention (in fact, the morning before the speech I checked and saw that the mayor had 9,800 followers on Twitter; as of publication he is at 26,000+). That is something that anyone should be proud about.

Check out the transcript of Mayor Castro’s DNC Keynote speech on Fox News.