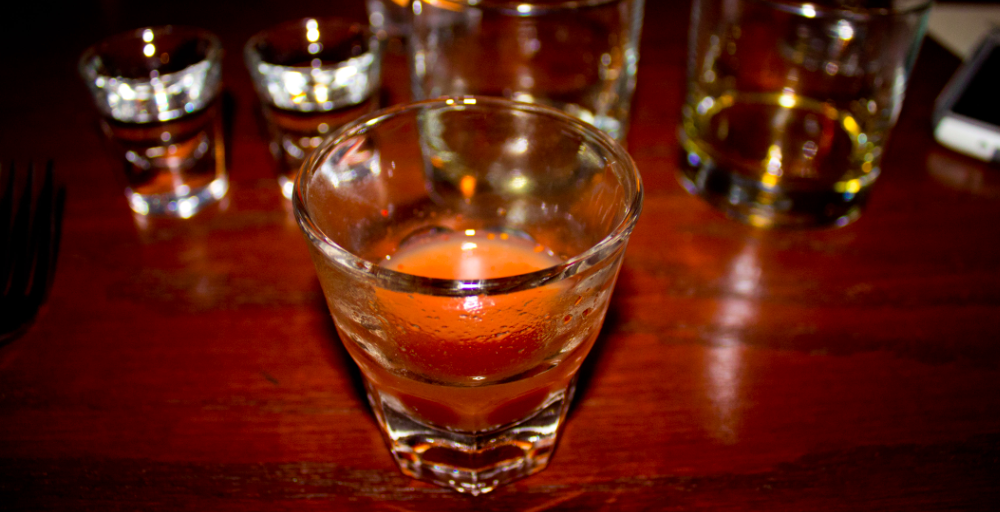 With the San Antonio Cocktail Conference only days away from officially kicking off, paired dinners around the city have been underway. My destination for dinner was Folc—a restaurant in Olmos Park that offers outside the box, gourmet-style food. The paired dinner served a total of eight courses alongside tequila-based cocktails from Dulce Vida Organic Tequila.

Our bartender for the evening, David Naylor, is the current head Park Social bartender. David crafted each cocktail like a piece of art, with a keen eye for detail. He passionately explained to the table the intricacies of each cocktail. He jokingly advised each of us to pace ourselves and to start out with sips. The night was young, the cocktails were plentiful and I was more than excited to eat and drink—I even skipped lunch so that I would have extra room.

The first step was to sample each of the Dulce Vida tequilas. We were given five small glasses to taste-test several varieties. The first three glasses were poured with the three basic tequilas: blanco, reposado, and añejo. We heeded his earlier advice and took little sips—each sample had a major kick and subtle complexities to their taste. My favorite of the five was the pomegranate-based sangrita with smoked salt. As a fruity drink enthusiast, this spirit stood out because of its classic salty-sweet appeal.

The first dish of the evening was the chef’s play on chips and salsa. As an avid eater of chips and salsa, I was both surprised and pleased that the chips were puffy and crunchy with a smoked yogurt, ham and vinegar sprinkled on top. Everyone dove in and the room was filled with loud crunches.

The next course was hamachi—a Japanese Pacific yellowtail dish. The fish had a delicate flavor similar to honey that was balanced by hearty herbs and peppercorn with sweet pieces of apple. David produced our next cocktail which was a play on a Preakness. Mix a little bit of sweet vermouth, añejo tequila, a giant iceball and voila! A sweet cocktail with a nice smoky aftertaste. Delicious!

With only nine people seated at the table there was quickly interesting conversations and friendships forming. The ambassador for Dulce Vida Tequila, Richard Sorenson, stood and provided our intimate group with the science behind the tequila. He explained that spirit comes from the Tequilana Blue Weber Agave plant and how when the plant is at its maximum sweetness the workers will take a sharp tool called a coa to slash the leaves off. Richard even brought a coa etched with the “Dulce Vida” logo to the dinner.

After hearing his detailed explanation, course number three arrived. It was a crab leg that was served with—wait for it—pickled jalapeño chili butter. I was both surprised and skeptical of the taste. But all I can say is “wow” and “please give me all the pickled-jalapeno-chili-butter-crab legs that you can carry.” The butter just seeped in and was so, so sweet.

As soon as you finished one plate, the next one appeared! This time it was a pork belly with black eyed peas and radishes. The secret to its tasty appeal were the peppered spices that laid on top and the powdered olive oil that provided moisture. This was accompanied by a cocktail with a classy name—the Uno, Dos, Tres—a fusion of many things including grapefruit and blanco tequila.

My belly was starting to expand as the next dish, a pastrami duck with pumpernickel and mustard arrived. The duck was nicely seared and with each bite offering a new flavor. The first taste I noticed was lemon, then spicy pumpernickel and then mustard. It was came with a sweet cocktail that consisted of a mixture of blanco tequila and grenadine with a beautiful hibiscus flower resting inside.

With the evening nearing to a close, we were served the final main dish of clod tender, or beef shoulder. The beef was dusted with mole powder and bits of sweet corn on the side. I had never had the pleasure of trying beef shoulder and, man, I was missing out.

At this point, David surprised everyone at the table with the final cocktail. On the table he placed two clear flasks that were filled with pieces of oranges, hibiscus and apples. The flask was pressurized and when poured with liquid—in this case blanco tequila—the fruit pieces seep into the liquid and create a sweet beverage. It was the gift that kept on giving with each shot that was poured having a deeper and more intense flavor than the last.

The final treat of the night was dessert, and luckily for us, there were two dessert plates arrived to the table. The first sorbet dish was grilled with masa cake pieces and sweet corn. I loved the dehydrated meringue which complimented the sweet lemon sorbet. The second plate featured white chocolate, pears and milk olive oil sherbet. I’m always excited by any meal that has two dessert plates, and I was impressed with how beautiful each of these plates were.

To end the evening, Folc sent us off in style with a night cap. We were each given a mug filled with Mexican hot chocolate with ample amounts of tequila in it. As the marshmallows were seared and toasted to perfection, I reflected on how lovely this evening was. Each dish was more delicious than the last and had subtle complexities that set Folc apart from other San Antonio eateries. I finished my beverage, thanked the chef and said goodbye to each of the lovely new people I had met. I can’t wait to come back and feast at Folc!