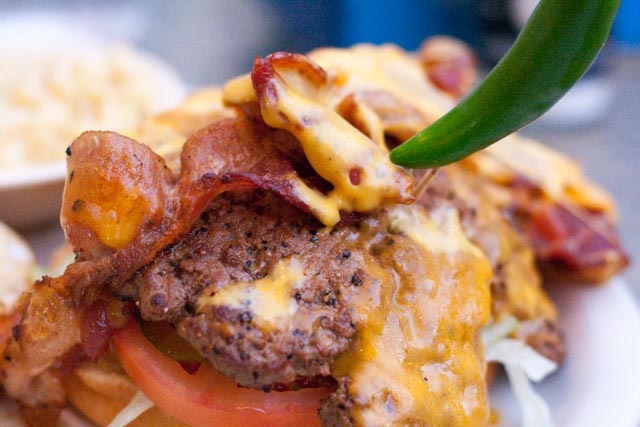 I want you to try something this week. First, ask a random colleague from work or an acquaintance that you don’t know that well for one restaurant that they would suggest to an out-of-towner. I bet that four out of five times you will be hard pressed to get a straight answer. The reason is that (1) this person doesn’t have any context into the visitor’s tastes and (2) with the question framed so broadly it is difficult to hit a nerve.

Now, reframe the question to be, “Where should we go for the best burger in town?” The types of answers will immediately change, but it is not because you have just narrowed down the scope for the types of restaurants. Rather you have asked a question that brings out the passions of the most sophisticated foodie all the way down to the average Joe. Burgers are something we all can get behind.

When San Antonio Jane was talking to some of her NICU nurse friends about the best burgers in town, two of them praised the grilled ground chuck at the Antler Cafe, a restaurant just east of 281 on Highway 46 going towards Canyon Lake. While one nurse said it was the best burger around, the other agreed that it was pretty darn good. This was enough to get us in the car and cruise up to the far Northside to see what it was all about.

I used to take the same route to tutor SAT prep to Smithson Valley High School students, and while San Antonio development has continued to push north, the area still retails its Hill Country charm. The rolling hills at sunset (or sunrise) are a site to behold, and one you should see before the urban jungle swallows them whole. Leaving the city limits, you will eventually hit the town of Bulverde and then exit the road for Highway 46.

Antler Cafe is the quintessential Hill Country restaurant and watering hole. Walking inside would give any vegan or vegetarian pause with the countless numbers of mounted bucks and antlers. The outside has a sizable patio with water misters (though I was confused why they didn’t shut them off after the sun had gone down and it was plenty cool outside), a stage for live music and a huge playground for the kids. Greeted by a waitress with a South Texas draw made the place feel welcoming, though the service felt like something I might get from a family member rather than a restaurant – it was friendly while being not all that attentive.

Since we came to get the burger, the burger is what we got, stacked high with bacon, cheese and a fried egg. I opted for the jalapeño mac ‘n’ cheese while my wife ordered the fries on the side. The waitress called it the “dirty burger, fully loaded” because it came out so messy that when people come dressed in their business clothes they often leave with evidence on their shirt that they had stopped by the cafe.

I was amazed at the size of the burger when it came out of the kitchen. While the bacon was only a dollar to add on, it felt like the fried up an entire package for my burger alone. To keep the strips attached to the burger, the cook melted a slab of cheese on top to adhere it to the patty. This turned out to be a smart move, because the bacon would have shot out of the bun when you started to eat it. The hamburger meat was lightly seasoned and the extra saltiness from the bacon came in handy here as well.

One thing that was unexpected was the fresh Serrano pepper that they speared through on the top of the burger. Hotter than even a jalapeño, small bites of the Serrano were enough to set my mouth on fire, giving that extra kick to the burger that would be cooled down by the yolk of the fried egg.

While the mac ‘n’ cheese was nice and creamy; it was flavored with jalapeños but after munching on a Serrano pepper I couldn’t really tell. However, I should have ordered the fries. They seemed to be battered and then fried, giving an extra bit of crispiness on the outside. Each of our meals clocked in at $9.99 a plate, which for a Saturday night seems to be a steal for me. I figured I ate that amount in bacon alone.