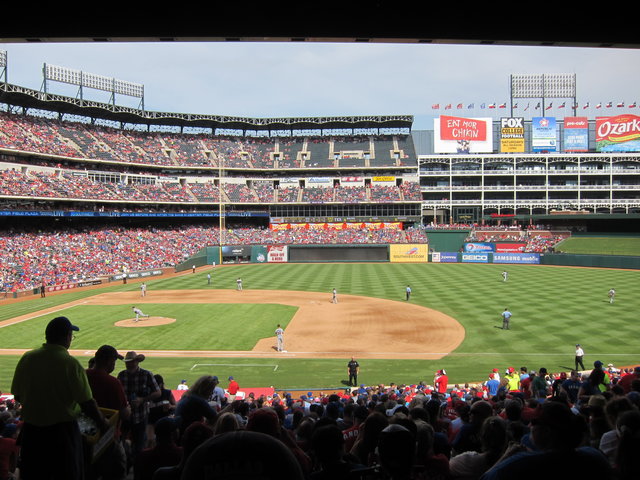 One summer tradition I love is getting to go to a ballgame with my grandfather, known to most everyone (and I mean everyone) as Pop. Pop and I have been seen our beloved, and often beleaguered, Texas Rangers play in Arlington since 1993; our first home stand was when Nolan Ryan pummeled Robin Ventura (more on this later).

Pop missed last season because of a knee surgery, but this year he was looking good and his knee was feeling great (not to mention celebrating his 90thbirthday!). We were able to get out to the ballpark at the end of August to see the Rangers take on the Twins.

Anyone who has been to a baseball game knows that food is an integral part of the experience. Be it hot dogs or peanuts, everyone has a food that they look forward to when they go to the ballpark. I was planning to write an article focusing on my experience with the Boomstick, a ginormous hot dog the Rangers introduced this year, when I realized that this is only a character in a cast of food and stories that have made going to the ballpark so special. Here are some of my favorite food memories at the stadiums.

The Boomstick is a monstrosity; it is a $26 hot dog that is almost the length of a baseball bat. The name pays homage to nickname that slugger Nelson Cruz gave his bat. This hot dog is ridiculous and takes five or six ladles of chili and another five or six ladles of nacho cheese to top the entire dog. In order to get the dog to your seats, you are given this carrying case for the Boomstick that elicits plenty of “Ooohs” and “Aaaahs.”

While most foods that are gigantic are often gimmicky, the Boomstick is delicious. The hot dog has a spicy flavor to it , so visitors beware, you are in Texas where we like everything to be spicy. The bun was exceptional; it was fluffy and seemed like it was baked the day of the game instead of being one of those hard, stale hot dog buns. The Boomstick fed three of us and there was a length of a normal sized hot dog left over. You have got to try this thing.

I was on a trip up the Pacific Coast Highway with my future wife when we stopped to watch the Angels play in Anaheim. I made a scorecard back in 2002 with a page to keep score at every stadium and was excited to catch an Angels game. The hot dogs looked delicious, and while we were waiting in line I realized I left that scorecard in the taxi! This thing had been to Boston, New York, Saint Louis and more. I was beside myself (but got a hot dog anyway).

My future wife was incredibly calm (this is one of her greatest qualities when a adverse situation pops up) and assured me that I was going to find it. She said that all we had to do was call up the cab company and let them know that I lost it. In between cheers, I called different cab companies (we didn’t know which one we hailed, but knew nothing would come of it. Obnoxious Yankees fans behind us didn’t help my mood as I sulked in my seat, so we left early. In the parking lot I got a call: the cab company found my book! I’ll have to get back there so I can actually enjoy the hot dog.

I was lucky to score tickets through the lottery for the Rangers World Series appearance back in 2010. Pop, my brother, a good friend could hardly believe it and we went to the stadium to see them take on the Giants. Our seats were on the Lexus Club Level so we had access to this a bar that could serve hard liquor. Pop was getting some drinks and asked what I wanted, to which I replied, “Get me the same thing as you.”

Pop ordered a pair of Johnny Walker Black on the rocks. The bartender asked him a question, which he didn’t quite hear, but Pop told here “Yeah, sure thing.” Turns out that he ordered two doubles of Johnny Walker Black (and a healthy double at that due to the Pop charm). Pop’s eyes got big when she brought it to him and he asked, “What is that!?” When the misunderstanding was explained, the bartender made them the price of a single (again, the Pop charm). I’m still amazed we could watch the game after finishing that drink!

When I moved to San Antonio in 2005, I became a fan of tequila. I had never had the spirit outside of a margarita, and moving down to South Texas I started to explore it with the help of a rancher friend. In that time, I got Pop interested in tequila.

Pop has a friend, Smokey, who typically favored crown and Diet Coke; however, one day Smokey decided to mix in some tequila instead. That day a hellacious mixture was born that Pop swears by: Cuervo gold, Diet Coke and a lemon. We were coincidentally at the Cuervo Room at the Rangers ballpark one game in 2008 and Pop decided to order this concoction. To this day both bartenders and myself think that he is crazy when he orders it.

The summer of 2004 found me doing an internship in the BBQ capital of the world, Memphis, TN. I was only working in Memphis for the summer, so finding a short term, fully furnished apartment was nearly impossible. My apartment wasn’t in the best part of town, but one advantage was that it was close to the downtown stadium of the Memphis Redbirds.

I grew up a lot that summer: I learned what it was like to have an 8 to 5 as well as how to survive in a completely new city all by myself. One thing that sticks out was watching the Redbird play baseball while munching on some barbeque nachos – your typical stadium nachos topped with good helping of pulled pork.

At the end of my freshman year, I took a train from New Mexico to Chicago to visit a friend who was attending college there. From an early age, my mom had instilled a passion for travel, and his was one of the first trips that I took by myself.

One of the highlights of the trip was to go see a Cubs game at the friendly confines of Wrigley Field. Before that trip, I had never had a Chicago styled hot dog – it comes with a lot of different vegetables and is often said that it was “dragged through the garden.” One thing is for certain: be sure to get some celery salt with it.

If you went to a Rangers game in the mid 90s, you know the person I’m talking about: the stadium vendor who would walk the aisles, stop and in a croaky voice yell, “Hottttttt Dogggggs.” He would then stand still with a big grin and look side to side to see who wanted a hot dog.

Growing up, we would purposefully not get a hot dog in the concourse so that we could get them from the hot dog guy. Unfortunately, this was before the era of YouTube and camera phones, so I was unable to find video footage of this man in action. I have no idea what happened to him, but he was a staple of the Rangers games in my youth.

This was the first home stand that Pop and my brother went to. The Rangers were still playing in the old Arlington Stadium, and the highlight was getting to see my hero Nolan Ryan pitch against the White Sox. Since Nolan was on the mound, we had nosebleed seats, but it didn’t matter because I got to see the strikeout king and best fastball pitcher ever to play the game.

At some point in the game, Pop and my brother decided to go get nachos, so they left their seats and went down to the concourse. I was watching the game, mesmerized with every pitch from my favorite player when all the sudden Nolan hit Robin Ventura, a batter for the Chicago White Sox. Ventura tossed his bat to the side and acted like he was going to take his base without incident, when all the sudden he took off and charged the mound after Nolan.

The crowd went wild and started cheering; being a small fry I couldn’t really see much of the action, so I stood up on my chair in time to see Nolan collar Robin Ventura and begin pummeling him. The crowd was roaring and when the umps finally cleared out the brawl, they ejected Ventura but let Nolan remain in the game. Pop and Bryant missed the entire thing, and to this day I am incredibly adverse to leaving my seat during the middle of a game!