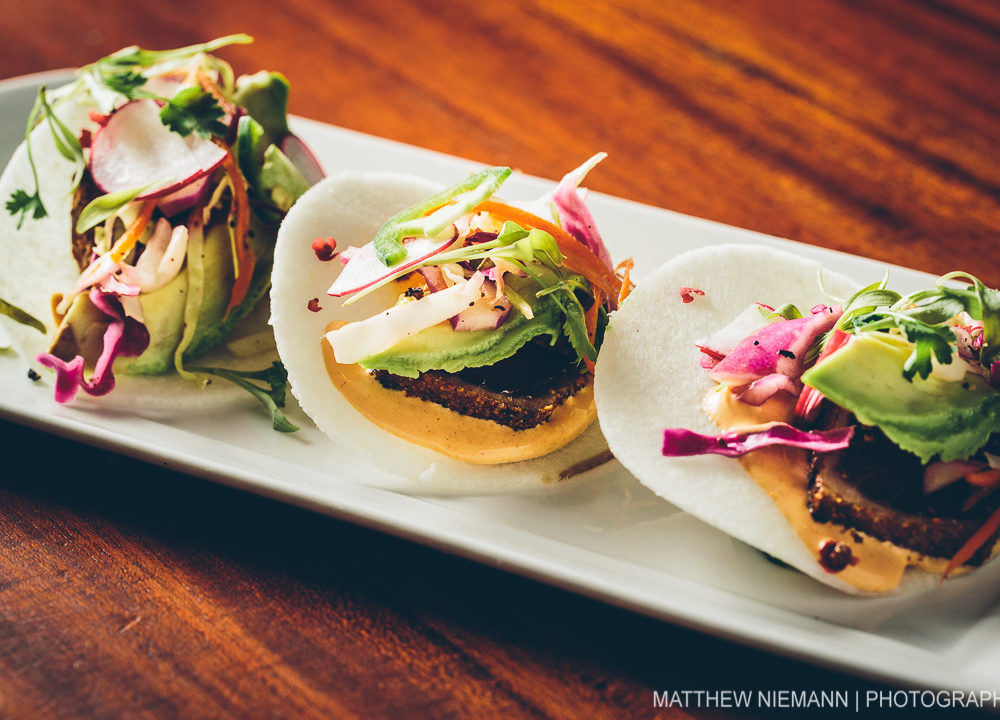 Bohanans is widely known for their high-end steaks along with being birthplace of the San Antonio craft cocktail scene. But while you’re sipping on an Old Fashioned downstairs, you may want to explore the thoughtful bar menu that Head Chef Heather Nanez has put together.

Playing on seasonal ingredients—and the fact that there’s not a full kitchen downstairs—the menu is designed to be a light first course upon arriving to the restaurant, something to eat quickly before a show at the Majestic or even a quick lunch.

The tuna tacos in a jicama tortilla with avocado, radishes and spicy mayo were one of my favorites. The fish was perfectly seared with the bright pink interior. Jicama was an interesting choice for the tortilla, giving it a nice crunchy texture. I loved the spicy heat that kicked in after eating a bite. Pair this dish with a classic daiquiri made with barrel aged Pyrat rum and charred pineapple bitters made in-house.

The crab and avocado salad is as beautiful as it is tasty. The lump crab with roasted corn is covered with a thinly sliced avocado that is perfectly ripe. It is very rich with a hint of saltiness, but isn’t too heavy. The dish is served with Bibb lettuce and heirloom tomatoes.

There’s nothing better than a fresh tomato, and the Raindrop Tomato Salad honors that ingredient. Vibrant colored heirloom tomatoes from Raindrop Farms are served with truffled goat cheese and Saba vinegar.

Continuing with the tomato theme the Caprese flatbread that is a nod to the traditional Margherita pizza. This goes well with the champagne based French 75 cocktail, given it’s name, according to Wikipedia, because it “was said to have such a kick that it felt like being shelled with the powerful French 75mm field gun.”

Chef Nanez said her staff was really getting into sardines after one of them traveled to Spain. The team loved sardines so much that she decided to add it to the bar menu. They’re served along with pickled onions, spicy mustard, brown bread and Sweety Drops—a small red pepper that are sweet, sour and incredibly addictive.

If you’re a lobster fan, you won’t want to pass up on the Maine Lobster sliders. It’s straightforward and spot on to the classic dish. And there’s tons of lobster that come on that roll.

But the favorite dish of the evening has to go to the BLT sliders. It’s made with Kurobuta Bacon, which is basically the most thick, crunchy, rich bacon you’ll ever have. I’ve talked with several people about the bar menu since I visited and everyone who’s been to Bohanan’s asked if I ordered the BLT sliders. While the bacon is obviously the star of the show, the heirloom tomatoes, hydroponic lettuce and basil mayonnaise compliment it well.

Finally, there were a couple of cocktails that caught my eye. The Beso de Agave, served in the tall glass on the left, is the 2016 signature cocktail at the San Antonio Cocktail Conference. Made with Milagro Tequila and Montelobos Mezcal, it has a smoky taste that gives way to the sweetness of pineapple juice, ginger beer and agave nectar that’s in the cocktail. And speaking of the Cocktail Conference, don’t forget that the tickets go on sale on November 15th.

But my favorite was this Pumpkin Old Fashioned—it was a classic Old Fashioned that included a homemade pumpkin bitters as an ingredient. I think it’s cool that Bohanans experiments with making their own bitters (you may recall earlier in the article the house-made charred pineapple bitters in one of the daiquiris that was listed), and was surprised to hear that the head chef is one of the folks who makes them.

“The bartenders are the stars here,” Nanez said. “I just like to tinker around.” I just hope she keeps tinkering.

Bohanan’s provided all the food and drinks in this story free of charge. All photos were taken by Matthew Niemann Photography.