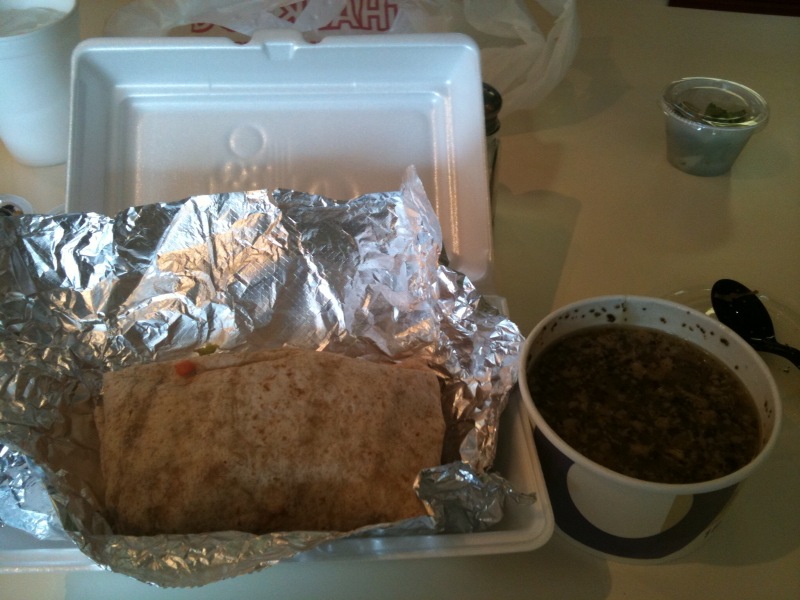 So I haven’t done this in a while.  It wasn’t because I stopped eating; my waistline can assure you of that!  However, I have started eating out way more infrequently as I have been on a budget.  This is primarily due to the fact that I have quit my job in pursuit of a dream of doing my own thing.  I have always been thankful to what companies and corporations can provide: benefits, a paycheck, friends, and structure.  It is just that I have always enjoyed doing something on my own terms.  I need a little more flexibility and freedom to either obtain wild success or abject failure on my own.  For this reason, I have decided to chase after that dream before I settle down and have other people dependent upon me instead of just myself.  Consequently, I don’t have the money to eat out near as much…

First off, the shop is kind of smallish so if you want a place to sit you better get there pretty early.  The owner, Robert, seemed pretty nice.  He helped a couple of ladies behind me as he talked through the menu and how his ingredients made him a different taco shop than others in San Antonio.  From what I overheard, it was primarily due to the fact that they use fresh ingredients and native ingredients to Mexico.

I decided to order a burrito and a bowl of posole to take home and eat at another time.  While I was waiting for my food, I got some chips and the homemade salsa’s (I particularly liked Eli’s Crazy Green salsa which was named after the customer who submitted the recipe along with the spicy Ranch sauce) and sat at the table.  The owner was talking with another patron about the beans and what he could do to make them better.  I liked the fact that the owner is willing to listen to his consumers.

The burrito was your standard size Chipotle style burrito, and it was just as good.  There was nothing earth shattering about the burrito and the price was in line with what you would pay at a chain like Chipotle and FreeB!rds.  The posole on the other hand was pretty dang amazing!  The flavor from the pork complimented the hominy really nicely.  I don’t really find posole that often in San Antonio so it was a treat to find it here.

Since the price was in line with what you would pay with a chain, I would definitely say to give this restaurant a try.  Plus, if you are in the mood for some posole then this is the place to go.

***UPDATE***  This restaurant closed shortly after I visited it.

Value: 7.5/10 (In line with the chains that serve the big burritos)
Atmosphere: 7.5/10 (Small inside that is very clean.)
Service: 9/10 (The owner really cares about what people think about his restaurant and food and is always looking for feedback.)
Taste: 7.5/10 (Run of the mill burrito, however, the posole was really amazing!.)
Website: http://www.thattacoshop.com/
Twitter: http://twitter.com/thattacoshop