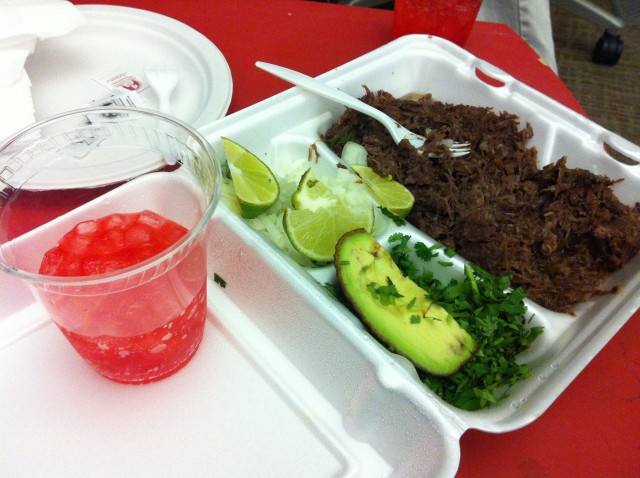 Yes, I have been a lousy food blogger recently. Other than having a bunch of articles about eating healthy, I have really slacked off on the Quick Bites and reviews on restaurants. My bad.

I satisfied my cravings for Mexican food this past week by visiting Taqueria Datapoint a couple of times. So you get a two-for-one review to make up for me neglecting the blog.

Last week Big Red sent me a sample pack of their Big Red Zero to try before it hit the shelves. I decided to take it to work and knew that it had to be paired with Taqueria Datapoint’s barbacoa to give it a true taste test. The only way to tell if the Big Red soda with zero calories is any good is to actually drink it while eating barbacoa.

What I love the most about their barbacoa set up is that they give you all the fixins—you get a side of cilantro, onions and avocado to help make your tacos. The corn tortillas are thick and go well with the barbacoa. If you are a gringo and prefer your breakfast tacos to be made with a flour tortilla, do yourself a favor and opt for the corn when eating barbacoa at Taqueria Datapoint. You won’t regret it.

The barbacoa was devoured by my coworkers in an instant. (Pro Tip: if you are going to be a little late at work, bring barbacoa and all will be forgiven.) The Big Red Zero was spot on; it was as sweet as the original and didn’t have that funky diet aftertaste. Since it paired well with the barbacoa you know that it is the real deal. Now, if they could just get to work on making fat free barbacoa that tastes as good as the real thing…

This weekend I again found myself craving a big Mexican breakfast and was drawn back to Taqueria Datapoint. I decided to dine in and really liked how the new seating area opened up the restaurant. The walls are painted with a bright orange color that was sponged on so you can still see some white. The front of the restaurant is entirely made of windows that let in a flood of natural light which gives the restaurant an airy feel.

I also love the sound of the restaurant because while it isn’t loud it also isn’t dampened: you can hear a mix of both English and Spanish from the customers and waitresses, laughing at tables across the way, the sound of breakfast tacos being wrapped up in bags and delivered to go and the occasional Tejano song on the jukebox. The language of choice is Spanish, and most likely the waitress will initially ask you “¿Cómo estás?”  If you don’t speak Spanish (or just know a couple of words like me), don’t fret and reply with a “Hello” and you’ll be on your way.

While I was tempted to order barbacoa again, I decided to give their chilaquiles plate a try along with a cup of coffee. The chilaquiles were made with the white cheese instead of the yellow and were very tasty. While there were not a lot of peppers in the chilaquiles, there was a green salsa that had a strong bite on it that could wake it up.  I wish that the tortilla strips in the chilaquiles were a little more crispy, but that was not a huge complaint.

The refried beans were outstanding; I don’t know what makes their beans taste so good, but I think that they are some of the best in the city. They were particularly tasty with the green salsa and the flour tortillas. While I was eating breakfast I saw an assortment of soups, street tacos and fajitas come out that looked delicious. I am definitely going to have to come back to check them out for lunch.

The next time you are craving barbaco or a big Mexican breakfast, check out Taqueria Datapoint, one of the best restaurants to showcase the multicultural flavor of San Antonio.