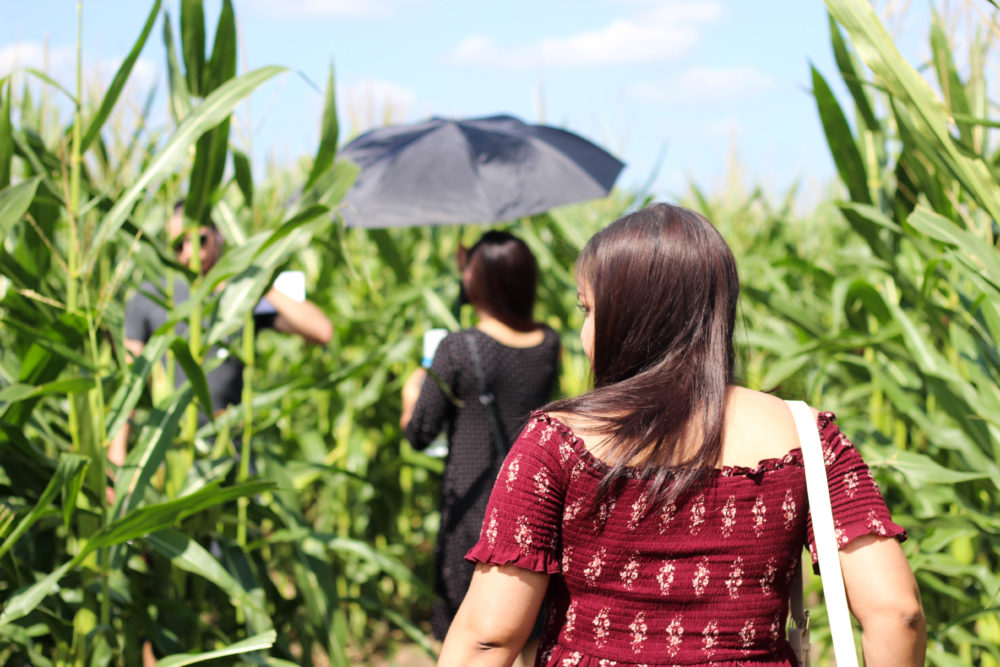 If you haven’t noticed, Fall is here. While the weather is the same, the pumpkin spice lattes are out and the Halloween decorations fill every store. Fall is everyone’s favorite season, especially for my cousins Nadia and Gabby. That is why we decided to ring in the Fall season at The South Texas Maize in Hondo and conquer the seven-acre maze for our customary cousin-outings.

The maze is split into two phases. Our group of seven chose to do the larger, tougher Phase One. We were shown a picture of the maze—the design honored the military and gave a sponsor shout out to H-E-B—and given instructions.

We were told that we would find help in the form of little slips of paper with trivia questions. There were five questions and five check-points throughout the maze. Once we hit a checkpoint, we would need to answer the corresponding trivia question to lead us down the correct path. A trivia question read like this:

What are the names of Ricky and Lucy’s neighbors/landlords?

They had trivia questions over a variety of topics from Sports to Tiny Tots for the little ones. My group’s strategy was to vary topics so that we could see if our correct answers led us down the same path. Smart? Thanks, it was my idea.

Entering the Maze – Did we pass One already?

We entered the maze with high spirits. That was until 10 feet in, we were forced to make a decision: Left, Straight, Right? We chose right. Deadend. We backtracked, took a left and were faced with more decisions. Someone asked, “Was the Phase One sign the first checkpoint?” Nope. Someone else asked, “Did we pass One already?” We didn’t know. We were about 2 minutes into the maze.

It was that moment that I decided to turn on my FitBit’s stopwatch function. I knew we were in for a long ride

Checkpoints were protruding metal rods with a number welded on it. We ran to the first checkpoint with trivias in hand. Resounding I don’t know’s flooded the group as we read our first trivia question. All of us stumped in each of our topics. Nadia’s boyfriend Will pointed in a direction, “It’s that way.” I don’t know if he was well adept in Country music trivia—he had the Pop Culture set just like me—or if he looked it up on his phone while we wandered around. No one questioned him, we just went.

At some point prior to Checkpoint 2, we lost some of our group. The boys developed a strategy where they would rush in the opposite direction to see if we made the correct choice, then rush back to us. Sometimes they’d take longer to rush back. “Where did they go?” Gabby asked. “Don’t worry, Josh and I have each other on Find my Friends,” I answered. They eventually found their way back.

The hardest part about doing the maze midday was the heat. Nadia would retreat into the cornstalks for some shade. “I don’t go outside!” she pouted with flushed cheeks, “I need to get out of this dress!” My cousins were in fall dresses and small heels. Undoubtedly adorable. Undoubtedly uncomfortable. I was instantly grateful for switching from sandals to keds before heading out to Hondo. However, I definitely regretted my shawl.

We eventually made it to the edge of the maze. Through the cornstalks, we could see Highway 90. Someone suggested we could make a quick getaway and return to civilization. So tempting.

During our journey, we cut through makeshift paths of trampled cornstalks. Clear signs that others had also become frustrated and were desperate to get out. Somehow, we found ourselves surrounded by other families and at Checkpoint 5. Truth be told, I didn’t even know we passed Checkpoint 3. Apparently, we did. But what happened to Checkpoint 4?

We began to hide in the cornstalks to take a break from the sun. Gabby’s boyfriend Xavi suggested we draw sticks, and the shortest stick would be the person we’d eat first. This prompted the debate of who would be the most logical person to eat if it came to that. It was agreed upon that if my cousin Nathan was here, he’d be the first to go. Sorry, Nathan.

We piled out of the maze as if we’d been stuck in there for hours. It had only been about 20 minutes. We went straight to the first table we could find and sat there in silence.

The consensus of the group was that the maze was definitely fun, despite the heat, complaining, and potential cannibalism. Everyone agreed they’d do it again, but this time later in the day with better clothing and more water. (We’re actually planning to come back in November.) We learned that we suck at trivia, and if it wasn’t for Nadia snagging the Tiny Tots trivia, we wouldn’t have been 100% confident in our answers. Seriously. One of her questions asked how many legs a horse has. Six. Duh.

The South Texas Maize is not only home to the corn maze, but it has apple cannons, hayrides, a pumpkin patch, a mountain slide, great food options, and my personal favorite, the pig races. I got to witness a pig refuse to race and struggle to climb into a tub of water. It was great.

The South Texas Maize in Hondo is a family-fun environment, perfect for the Fall season. To plan your trip, visit their website at http://southtexasmaize.com/.