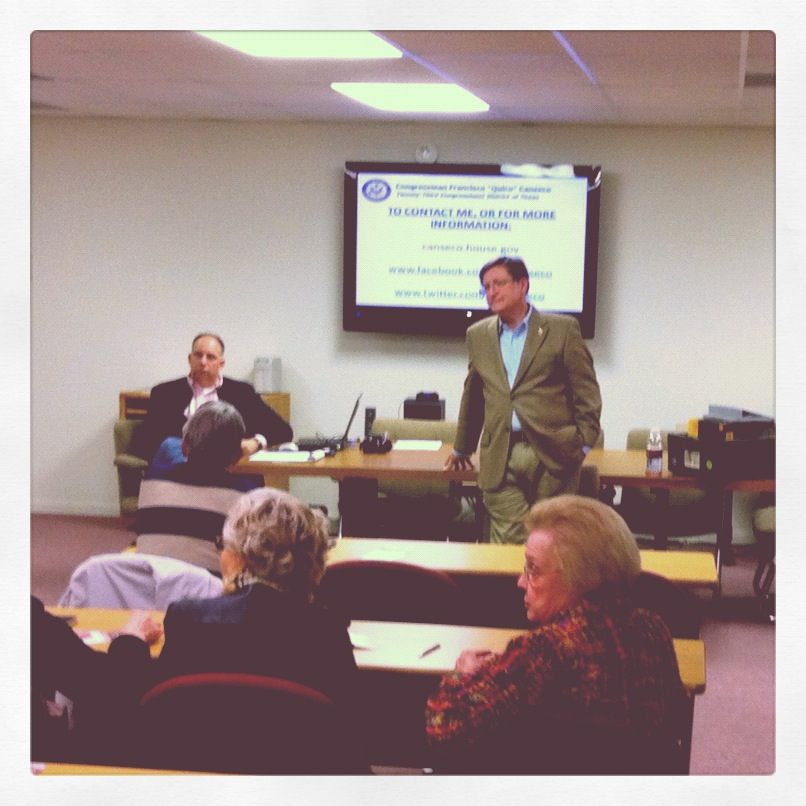 I know that this has nothing to do with restaurants, however, along with many other bloggers and tech companies alike (Facebook, Twitter, eBay, Zynga, Rackspace, Mozilla, Tumblr and Pinterest), I am very passionate about ensuring that the SOPA bill does not pass. Don’t know what SOPA is? Check out my previous post on it, then be sure to call your congressman as soon as possible to voice your concerns.

I made the trip to Uvalde, TX the other night to see Congressman Francisco “Quico” Canseco (who represents my district, the 23rd District of Texas) speak at a Town Hall. The 23rd District of Texas is one of the larger congressional districts that stretches all the way from San Antonio to El Paso and includes that stretch along the US-Mexico border.

I didn’t quite know what to expect and was curious as to how many people would actually be in attendance at this event. This was one of my first times to see “democracy in action” and I wasn’t disappointed. There were about 30 people in the room and I was impressed at how informed they were on different political topics and how they affected their district. While some folks were a little rambunctious towards those with an opposing viewpoint, I found it an overall fairly welcoming environment.

I went to the Town Hall in particular to ask Congressman Canseco to strongly consider how the SOPA bill could affect the US Information Technology sector and the future of the Internet. According to Congressman Canseco’s website, he is “a staunch advocate of limited government and free markets.” This ethos was echoed loud and clearly as he pointed to many governmental regulations in both the banking and healthcare industries as being a weight on the economy.

As his presentation ended, I saw this as a moment to ask my question as I feel that SOPA could impose many regulations on the tech industry that could inhibit growth. Additionally, I wanted to voice my concern of having the government effectively add a layer to our internet that was similar to the “Great Firewall of China.”

Congressman Canseco responded by saying that he did not necessarily like the regulations that were part of the SOPA bill as he thought they were similar to the government regulations on the Banking and Healthcare industries that he had complained about tonight. He also echoed a similar sentiment of mine of not wanting to live in a country like China, however, he did note that the bill was still in the steering committee. In summary, he had not quite made a definitive decision on his position on SOPA (you can read the transcript of his response and hear audio from the Town Hall below).

After I had spoke my piece, an older gentleman stopped by and showed me a card that he had typed up asking Congressman Canseco to say “No” to SOPA. There was a link to the Stanford Law Review post entitled Don’t Break the Internet and he gave it to the congressman at the conclusion of the Town Hall. I thought that this was a poignant moment because Congressman Canseco got to see that I was not just a young internet zealot, that there is a wide concern about SOPA in his district from all people – young, old, urban and rural.

There was also a couple that came to ask me further questions about SOPA and I explained it to them using the “phone” analogy on my previous post. They were unsettled to find that the government could potentially have a power similar to China to block citizens’ access to different websites.

I was extremely glad that I got to go to this Town Hall to meet and visit with my congressman face to face. Reflecting on the ride back, I was amazing that our forefathers could have developed a style of government so revolutionary and that has changed the world for the better. Hopefully we can continue to carry on their vision.

The following is a transcript of my question and Congressman Canseco’s answer. From the transcript, you will see that he has not made his mind up quite yet on SOPA, so I would encourage you to call his office at 202.225.4511, ask him to vote “No” to SOPA and mention you heard his Uvalde Town Hall response here on saflavor.com.

*NOTE: I have also attached the video, but please understand that my voice is loud because the recorder is by me while his voice is softer because he is further away. Please take precaution if you listen with a headset!

SA Joe: Congressman I am on the far East part of your district in San Antonio and made the trek out here. I know that you have quite the amount of land that you have to cover. But one of the things that was coming up to vote very soon, and in my mind, is a job killing regulation is SOPA bill that is on the House floor.

SA Joe: I’m part of a company in San Antonio that is very high tech and this bill, and those similar regulations that you are talking about on banks [this evening] I think this [bill] does to technology. The technology field, I think, is a very economic growth driven field, and I think that this [SOPA] could have some very damaging effects on it. On top of the fact that it fundamentally changes the way the internet works.

SA Joe: It ‘s going to add a layer to the internet, much like what China has, where it censors, the government could potentially, or in China’s case the government does censor its citizens by what is called “The Great Firewall of China.” I just would like to ask you, I know that this is coming up, it has been very much in the press, and just for your consideration on this bill, to really look at it, because it, it has some far reaching implications into how the internet works. I don’t want to live in a place similar to like China where…

Congressman Canseco: Nor do I.

SA Joe: … where the government…

Congressman Canseco: Nor do I.

SA Joe: …would be censoring its citizens.

SA Joe: And I completely agree with that.

Congressman Canseco: And I agree with that, with that aspect of it. But the way that it is going about doing it, what it does is the same thing that I have been complaining about, what the EPA does, what the Department of Energy does, what Dodd-Frank law does and what the Healthcare law does. I’m with you on that.

Congressman Canseco: I’ve read the SOPA bill as it is moving through committee, I’m not on that committee. I’m very concerned about it and fortunately I’m very close friends with Lamar Smith [the sponsor of the bill] and we can sit down and talk. But it is for his committee to resolve it and there many good people on that committee that agree with you on that both sides of the aisle.

SA Joe: Yeah, and I know it is very much a bipartisan support, when anytime Ron Paul and Nancy Pelosi can agree [to oppose] something, I think that, *laughter in the crow* I think that in general that’s a pretty good bill to make sure it doesn’t get through.