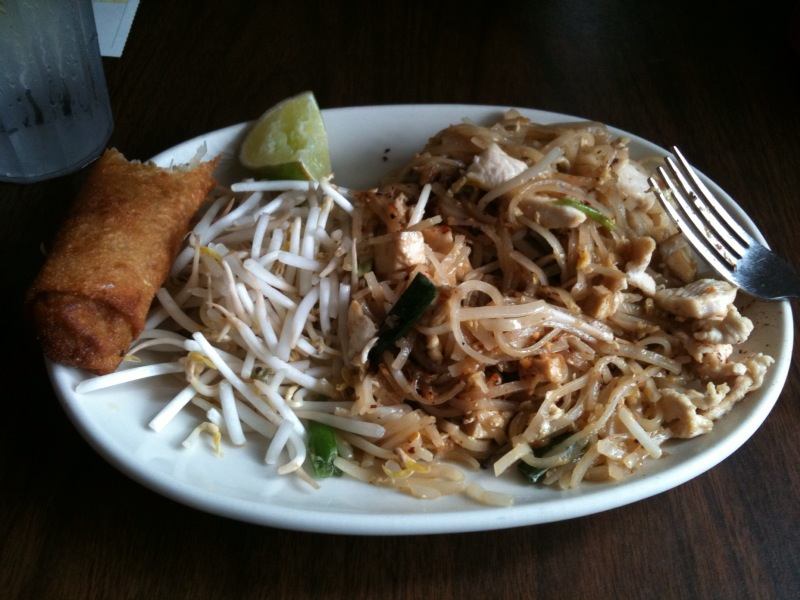 I know, I know, you think that I only eat Mexican food and hamburgers.  Well this post is to show you that I actually can get outside of my comfort zone!  As a coworker and I were en route to go grab a taco, a crazy thought came over me and I thought that we should try something different, so we decided to pull over and try Sompong Thai.

The inside of the restaurant was nice, but I have to admit, the atmosphere was not all there.  There were some clippings at the front from past reviews, and a lot of them were from some major publications so I was optimistic for the food.

As we were waiting to order, the waitress brought us a bowl of soup that was a nice appetizer.  I decided to order the Pad Thai, namely because that is what I always get at Thai restaurants, and I asked for it to come out extra spicy.

We didn’t have to wait long for the food, and overall all it was pretty good but definitely not out of this world.  The Pad Thai was tasty, but it was not near as spicy as I would have hoped.  I did get a kick out of the fact that they brought it out with forks instead of chopsticks.  I mean, I know I am a gringo but I at least like to attempt to use chopsticks at an Asian restaurant!

The meal was reasonably priced and was filling, so I will keep it in mind if I need a change of pace and something close by during lunch, but it is not a restaurant that I would go out of my way to eat.

Value: 8/10 (you are looking at $6.50 a plate with soup during lunch)
Atmosphere: 5/10 (nothing bad about the atmosphere, but it is definitely average)
Service: 7/10 (the service was fine and they were helpful, but I was kind of disappointed I wasn’t asked if I wanted chopsticks)
Taste: 6.5/10 (above average but not out of this world)