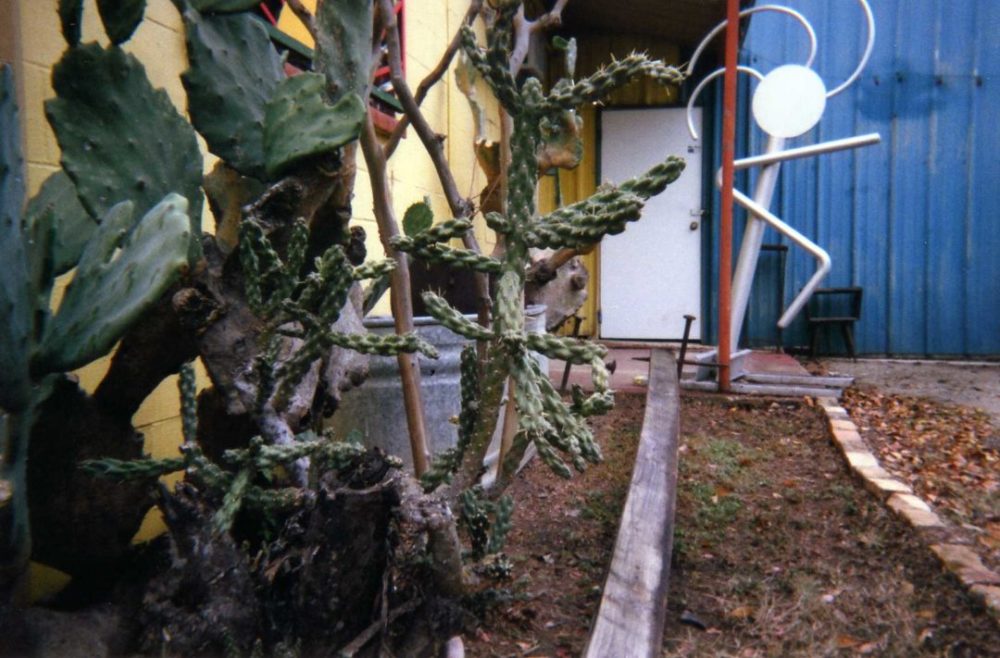 Artist Kim Bishop was the first person to contribute to the San Antonio Unfiltered project. Find out her story, and be sure to check out all of her photos from the disposable camera in the slideshow at the bottom.

Artist Kim Bishop grew up in Austin, TX during the 1960s and 70s and actually had her first show at Les Amis, across from UT at the age of nine years old. She received her BFA in Commercial Art in 1985 from Southwest Texas State University, teaching certificates in 1989 and MA in 2003 from Texas State.

As a resident of San Antonio, Kim opened a gallery called 3rd Space Art Gallery (144 Cassiano St, San Antonio, TX 78204) that she operates along with her partner and husband, Luis Valderas. Kim says that her “art is visual communication through the production of installations with paint, color, light and objects that allow the viewer to experience rather than just observe the work.” The 3rd Space Art Gallery is typically open every second Saturday (with the exception of January), and Kim has her latest show opening there on March 9, 2013.

Kim said that participating in the Unfiltered project was “unnerving, I have no idea if these photos will be in focus or washed out, but I certainly have had fun thinking about it.” I enjoyed seeing Kim’s pictures as I got a tour of Southtown and the Westside, along with images from her studio and space. She wrote in the journal that, “I am not a photographer but on a typical holiday morning here is what I see in my neighborhood… Everybody is an artist in San Antonio.”

Kim goes on to write that, “The thing that drew me to San Antonio was its sense of aesthetics. Art and the community are the commodity here. Surrounded by a diversity of people, culture and art, the signature of San Antonio is in the details.” While there are plenty of photos of sites that most San Antonians will recognize, many of the photos that Kim took does just that: focus on the details. There are textures and patterns that most might overlook, but when the viewer sees the location, many will recall where they come from.

In typical disposable camera fashion, there were four photos that were just blank images on the film at the end of the roll. We missed out on four interesting photographs she titled as: Skulls by Luis Valdera, Evening cocktails wine, Our Home Studio is the “Church of the Cactus” and “Passage” by Kim Bishop in my living room. I offered to let Kim take digital photos to replace them, but she told me that, “A beautiful and awful part of shooting with a disposable film camera is that you win some and lose some.”

If the slideshow didn’t load on your mobile device, click here to view all of Kim’s photos

Check out Kim’s 3rd Space Art Gallery on the web, Facebook and in person every Second Saturday (except January). You can read about the origins of the San Antonio Unfiltered project by clicking here.