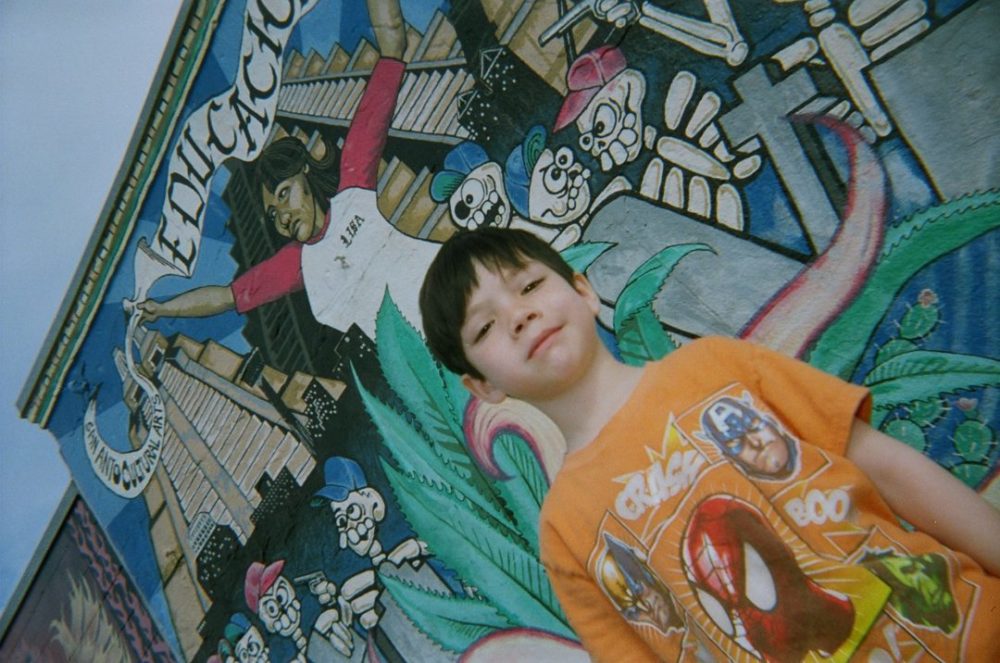 Artist and musician Juan Ramos is the third artist to contribute to the San Antonio Unfiltered project. Be sure to check out all of his photos from the disposable camera in the slideshow at the bottom.

Juan Ramos was born at Wilford Hall in 1971 and began his training at the age of eight at the Southwest School of Arts and crafts. Since that time, he has had a residency at Artpace, worked on murals and public art throughout the city and has taught classes at local colleges. In discussing the difficulties of using a disposable camera for the project, Ramos said that it was, “more challenging than I thought it would be. I’ve become so used to using digital cameras or camera phones that not being able to immediately see or delete what I just shot took some getting used to. Also, there were a lot of places and things I didn’t get to photograph because I didn’t have the disposable camera with me. I always have my phone with me these days.”

Ramos took his camera all over the city, but many of his photos took place around the St. Mary’s Strip. This shouldn’t come as a surprise since he is an active musician (Ramos plays drums for Sexto Sol, Glorium, Sun*Day or Suzy Bravo and the Soul Revue) and that area is one of the arteries of live music here in town. Ramos also traveled to the West Side to photograph Educacion, a mural that he collaborated on with other artists for San Anto Cultural Arts.

Ramos said that “these are some photos of places and things around this town that for me, have to do with art music, food and socializing (usually with artists and musicians in my case). Most of these things to some extent are specific to San Antonio and I believe they contribute to the flavor of our city.” Not only did he take pictures of some of his favorite spots to eat (Bill Miller’s BBQ, Siete Mares, Asia Kitchen and Alamo Street Eat Bar), he also captured some of his favorite home cooked meals, such as his mom’s arroz con pollo. Music played a central role in Ramos’ Unfiltered Project, there are many bands that our readers will recognize as well as venues that unfortunately are no longer around.

In addition to having a random person take his camera to snap a picture (that photo was removed per his request), Ramos found another limitation. “There were a lot of places and things I didn’t get to photograph because I didn’t have the disposable camera with me,” Ramos says. “Here’s a partial list of what I intended to shoot but didn’t: Florio’s, El Bucanero, Rudy’s Seafood, Rachel’s Barbacoa, my artwork at on display (at UTSA, the Bexar County Courthouse and Pica Pica Plaza), Janie’s Records and Frank Rodarte playing sax with Suzy Bravo and the Soul Revue.”

Ramos roll does show the vibrant art, music and food scene here in San Antonio. If you are interested in catching the artist in person, he will be performing with Sexto Sol this Saturday, March 30th at Sam’s Burger Joint ($10 advance, $12 art the door).

If the slideshow didn’t load on your mobile device, click here to view all of Juan’s photos.

Read about the origins of the San Antonio Unfiltered and check out the previous Unfiltered artist Judith Cottrell.