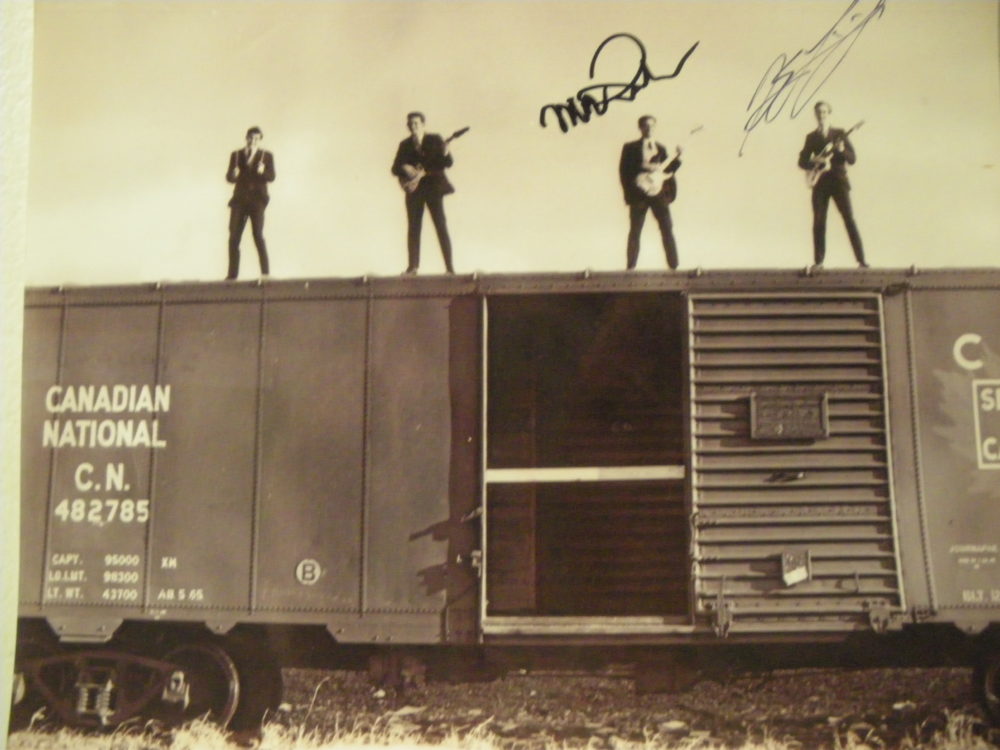 Wonderland? No, not Alice’s stomping grounds, but that famous rock ‘n’ roll palace on Fredericksburg Road, “Wonderland Shopping City.” Believe it or not, some of the best rock ‘n’ roll I’ve ever witnessed took place right in the middle of that shopping mall during the mid-60s.

Every Saturday of my junior high years (1965-67) was spent carousing through Wonderland, along with just about everyone else from Pat Neff and Sul Ross Jr. High Schools. We did our best to annoy every store clerk and “old person” in the mall—I still remember how to cut off the power to the escalators. I’ve since retired from owning Ralph’s Records in Lubbock and once had over 100,000 records in stock, but the ones I most value are the scratchy 45s I bought at the now-defunct “Platter Palace.”

Ah, yes, fond memories. Not a store in Wonderland was saved from our adolescent attacks (except Atomic Liquor Store, where we weren’t allowed in). I didn’t realize what a juvenile delinquent I was till now. I was kicked out of Montgomery Wards for setting off the alarm, kicked out of the mall for stopping the escalators, and kicked out of the Peppermint Lounge for turning up the jukebox too loud. (The volume control was in the back, lower right).

Did I say something about rock & roll earlier? I tend to get carried away down Memory Lane sometimes. Anyway, back to the subject at hand.

It was not unusual to find a local rock band playing out at the mall on a Saturday afternoon.

Two rock groups stand out in my mind, and for good reason. They were some of the best bands San Antonio ever produced: The Chayns and The Runaways.

Not to be confused with the sexy female Runaways of the 70’s, these were four guys from Jefferson and Edison High who could rock your socks off. Being in junior high, these high school superstars were the closest thing to The Beatles we thought we would ever see. We even asked for their autographs!

The Runaways really blew out some shoppers’ eardrums on July 23, 1966. Maybe that’s why the Auto Show people pulled the plug on them after two songs. The merchants were complaining and the band was told they could continue outside if they wanted to play some more. The car show stayed inside and we followed the band outside, where they set up by the front entrance to Montgomery Wards. There wasn’t much room on the sidewalk after the guys set up, so we stood out in the parking lot under that wonderful Texas July sun. I guess I would have stood on broken glass to watch a real rock band in action, though.

The Runaways played nothing but cover versions of the current hits, and that was just what we wanted. They did all the rockers, “Gloria”, “Wipe Out”, The Stones, The Kinks, The Animals (they did a killer version of “We Gotta Get Out Of This Place”). They also did the only hard rock version of Charlie Rich’s “Mohair Sam” that I’ve ever heard.

But the song that really blew us away was “Hungry,” by Paul Revere & The Raiders. The bass player, Mike Quillian, had that mean bass line down perfect and sang great too. The lead guitarist, Kent Liming, did a great “breathless” Mark Lindsay vocal. The rhythm guitarist, Chris Reinarz, was the cut-up of the band, but was right there with the back-up vocals and some leads as well.

But the real “rock star” and heart-throb of the band was sitting back there on the drums. His name was Tim Shively and I’m sure he broke his share of hearts back then. From that day on, I knew I wanted to be just like him. I even remember what he wore: a white long-sleeve turtleneck shirt (in July!), blue and white striped bellbottom pants, black Beatle boots and some unreal red and white striped socks. With his shoulder-length black hair, with a shock of white in front, he looked just like any of the other rock stars we watched on “Shindig” every Wednesday night.

I immediately coaxed my dad into buying me a set of Camco drums, but discovered after three days of practicing that my future was not as a musician. It was a cruel awakening, but not a complete loss—I still have my red and white striped socks.

These Runaways did put out one 45 I know of, “18th Floor Girl,” then faded away. I later heard that Kent joined another S.A. band, “The Swiss Movement.” Fast forward to 2011.

I search eBay once again for a copy of The Runaways 45. This was my “Holy Grail” of a record. I had found two copies in the past for $2,000 each, but couldn’t bring myself to pony up that much cash. Now, I saw a mint copy for $800 and the seller name had “liming” in it. Could it be guitarist Kent Liming? I messaged the seller and found out it was Kent’s brother, selling it for him.

Turns out he also had a mint copy of The Swiss Movement’s 45, “Spoonful,” for $400. And, if I bought both, he would put me in touch with Kent! I immediately pushed “BUY” and they were mine. A few days later, my phone rang, and it was Kent. Super cool guy, we talked for about 30 minutes about his music career. He was now in the auto business in Dripping Springs, but still played guitar. I got my records, plus an autographed “Runaways” 8×10.

We stayed in touch, and the next year, Kent and his wife, Helene, came through Lubbock and called. My wife, Polly, and I met them at the hotel bar and spent a couple of hours talking about ’60’s San Antonio bands. Later, that year, Kent appeared, with “The Swiss Movement,” at Floore’s Country Store for “The Texas Legacy Music Awards Show.” Not only that, I got to see The Outcasts perform (they stole the show), plus Chris Gerniottis from Zakary Thaks, the entire original Bubble Puppy lineup and met Myles Wells from The Chayns!

Speaking of The Chayns, in my opinion, they were San Antonio’s best band, as good as the 13th Floor Elevators. The Chayns were stars and they knew it. They even had a big local Top 10 hit, “Night-Time” originally by the band Strangelove and later recorded by George Thorogood. The Chayns played at Wonderland that same summer of ’66, for a fashion show at “Rhodes.”

My Lord, what a fantastic band! For some reason, they didn’t get the plug pulled on them. I really don’t know what kind of audience the fashion show was supposed to attract, but what they got was a couple hundred kids with about $1.50 in their pockets—we sure weren’t there to buy any new summer apparel. And who did I spot in the crowd? There was Mike, the bass player from The Runaways! I watched him buy some cigarettes from the machine in front of Woolworth’s. That was the last machine that still had a pack for 35 cents. All the rest were up to 50 cents by then. Yeah, we all smoked.

The Chayns opened the show with the most incredible version of The Kinks, “Till The End Of The Day” that I’ve ever heard (although another San Antonio  band, The Fugitives, recorded it and did a super job with it). The Chayns were shaking the mall walls. The lead guitarist, Myles Wells, broke a string about a minute into the song and just kept playing—what showmanship! It didn’t slow him down for an instant.

The lead singer, Charlie Edelman, looked like a biker and kind of stood off to the side most of the time, just looking mean. The bass player, Dale Watson, was cast in the Bill Wyman mold, although he looked more like Dave Davies of The Kinks. Add Wayne Gustafson on rhythm guitar and you had a very solid lineup. Dale and Tim Shively were featured in a back-to-school article in the Express-News a few weeks later, about long-hairs having to get haircuts to go back to school.

But, once again, like Tim, the “Mr. Cool” of the group had to be the drummer, Bob Tunmer. He always wore a thick silver chain around one of his black boots and rumor was, that’s where the band got their name. Bob definitely had to be another of my idols. When I was a freshman at Holmes High School, I found out Bob was a senior there. I didn’t exactly “stalk” him, but would watch him whenever I could.

Bob was also a great artist as well as a drummer and was President of the art club. Bob wore a fringe jacket and chukka boots, so I had to have those too. Bob was the coolest guy in school and probably didn’t even know it. You never saw him at pep rallies or football games, the man was too busy playing rock ‘n’ roll. (A few years ago, I tracked down Bob, now an Occupational Therapist, in Kerrville. We, too, talked for a long time, great guy!)

So, back to that Wonderland show. After Myles changed guitars, the group did their hit, “Night Time,” and then in came the fashion models. The band had worked up a little melody to play as the girls walked around on stage. It sounded pretty dumb, but Rhodes had hired a hard-rock band and that’s what they got. After the girls were through modeling their mod styles, the group did two more songs and took off. We were sure they had a private plane to catch to whisk them off to their next gig.

The Chayns were good, alright, good enough to release six singles, thre of them on their own “Chayn-Reaction” label. They even got their picture on the back of a KONO Hit List! But, early the next year, The Chayns broke up and San Antonio lost a great band. Later that year, in ’67, a new “Chayns” appeared on “Swingtime,” doing “Magical Mystery Tour.” But it wasn’t the same. It couldn’t be The Chayns without Bob and his boot chain, no way.

So, You didn’t realize that Wonderland was such a legendary rock venue? Well, it was “heaven” in junior high. If you don’t believe me, walk through there on a Saturday afternoon and try and imagine the disgusted looks on all the “old people”  as “Hungry” or “Till The End Of The Day” echo through the mall. You’ll see what I mean.

Ralph DeWitt, owner of Ralph's Records in Lubbock from 1979-2016, lived in the Thunderbird Hills neighborhood of San Antonio for seven years in the 1960s. He attended Pat Neff, Sul Ross, Holmes High and SAC. Now, a "collectibles" dealer on eBay, Ralph still hits the Austin Record Show twice a year, as well as the occasional San Antonio party!