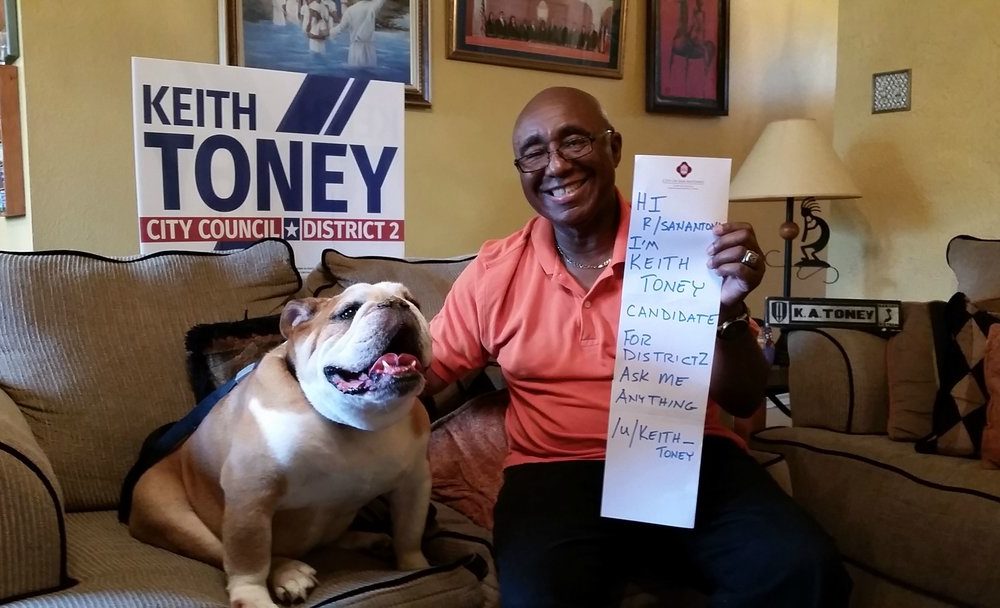 It’s been said that the dogcatcher has more impact to your daily life than the President of the United States—direct results in your neighborhood are felt more than far reaching foreign policy. In that vein, electing an official to City Council may be the most important decision we have to make, especially given that our Councilmen and Councilwomen control over a 2+ Billion dollar annual budget.

Yet we don’t often stop to consider whom we should cast our ballot for. While the mayor’s race often takes most of the media limelight, the district races are often left in the dust. When Mayor Taylor replaced former Mayor Castro, 5% of the registered voters showed up to elect Alan Warrick (1,786 votes) over rival Keith Toney (1,241 votes). In District 2, every vote carries weight.

In an effort to motivate the readers in my District, I want to throw my support behind Keith Toney. While it’s impossible to agree with everything that a candidate stands for, I’ve found that Toney’s background and ideas align greatest with my own.

A military veteran, Toney can identify with many who have served here in Military City USA. As an educator, he knows the importance of schooling and training for our young San Antonians. But what particularly impressed me was his openness and willingness to engage in an AMA (Ask Me Anything) on the social network Reddit.

For those of you unfamiliar, Reddit is a website that gives people the opportunity to up-vote stories and comments that they are interested in while down-voting things that they don’t like. This environment is also anonymous and allows for people to communicate without barriers. Toney took to Reddit to directly field questions from citizens in this AMA format, answering most all the questions posed to him without dodging the hard issues.

Some of the topics that he brought up there—and in a District 2 Forum that NowCastSA recorded—that I tend to agree with.

In both Reddit and the District 2 Forum, Toney’s top two priorities are on education and employment. He calls them his “fraternal twins.”

“I will aggressively court potential employers to bring more jobs to D2,” Toney wrote on Reddit. “I’ll also meet with education leaders at all levels to craft a ground breaking low/no cost education plan to help improve the lives of my constituents for generations.”

His third initiative was infrastructure, noting that many streets in District 2 have four to five inches of standing water after a storm blows through. Toney said that he believes that those issues should be fixed for children walking to school and playing in the neighborhood.

I also posed my concerns to Toney in the Reddit AMA about my concerns about the Mulberry and Broadway intersection (read the open letter that I penned to Councilman Warrick about the issue).

Here’s what Toney had to say back to me on Reddit:

First of all, thank you for recognizing the great customer service of my staffer, Ashley Harris. I look forward to returning that level of customer service to the D2 constituency. That traffic light and intersection remain a concern to me as well. Courtesy of your reminder here, this area has been added near the top of my Transportation & Capital Improvements project list. Once back in office, I will immediately contact TCI. I appreciate your offering a potential solution.

I can only hope that his office will be more responsive and creative at solving this problem than Councilman Warrick’s office. While I was able to walk Councilman Warrick’s Chief of Staff through this problem, it took an extra month over the promised deadline for his office to tell me that there won’t be a solution outside of a bond election in 2017.

I find this unacceptable and feel that if it was a high priority some creative solutions that will achieve a better result than the signs alerting drivers that there is a crosswalk (in spite of them, I still have to play Frogger crossing that street with my daughter or when I go on a run). Furthermore, I have yet to receive the promised TCI analysis of the intersection from his staff.

Finally, when Councilman Warrick was campaigning on the corner of this intersection, I thought it would be a good idea to stop by to visit with him. Instead I received a generic “we need to fix it” from the Councilman as I was gently brushed aside so that he could show his sign to the oncoming traffic—unfortunately in the midst of the campaigning his back was towards a father and four children who almost got hit as they were crossing the stretch from the old Jack-in-the-Box to the Kiddie Park.

The Streetcar was a recent hot topic issue, and Toney’s opinion is that the previous plan was impractical, but he did state he would like to eventually see a rail line from the airport to downtown. I echo those feelings.

I feel that the original map of the Streetcar was limited—heck, it didn’t even reach to the area of The Do Seum, much less Brackenridge Park and The Witte—and wouldn’t provide a better option than the three bus lines that serve the Broadway corridor. The Streetcar felt like a system that was more designed to transport tourists back-and-forth from the Pearl to downtown rather than something that would impact our community at large.

At a District 2 Candidates Forum, Toney stated that, “I would like to see, however, a rail system like in Atlanta and other major cities.” Toney said that he would propose a rail system that would run from the airport straight downtown—that particular line seems very similar to the rail that Portland built. It is also a plan I can get behind.

“I’m of the generation where we can’t wait to get in our car and drive somewhere,” Toney said at the Forum. “But not my children and grandchildren, they don’t want to. They want to bike. We need more bike lanes, safe bike lanes.”

I definitely feel this along the Broadway corridor. Stretching from just North of downtown at the I-35/I-37 interchange through Burr, Broadway is six lanes of traffic and I feel that one of them could easily be turned into a bike lane. Given the population boom with all those apartments that have seemingly gone up overnight (and more on the way), more and more people are peddling. They deserve to do so in a safe environment.

No doubt a hot topic, even though I’m a millennial, I actually side with Toney’s perspective on Uber and Lyft in that they should agree to the safeguards that the city wrote into the ordinance. Look, I love the convenience of the Uber and Lyft app as much as the next person—hailing a taxi is damn near impossible in this town and there is often an associated 20 minute wait to do so.

But I do feel that the City of San Antonio was not asking for the moon with these ordinances, especially in light that Uber actually co-wrote the ordinances themselves. It baffles me that they would walk away from the negotiation table after they had successfully steered it all because the restrictions were “onerous” (by the way, I feel that I’ve heard that word more in the last several months than I have in my entire life).

Toney had a very thoughtful response to this question, and it is worth reading in its entirety (especially if this is a hot topic to you). Namely that:

Again, Toney doesn’t have an outright objection to ridesharing operating in our city, but does object to those billion dollar companies trying to strong-arm us. I feel that this is a notable difference between he and Councilman Warrick and one that I support Toney on. Looking for more information on San Antonio and the ridesharing debate? I recommend this article on Slate.

The infrastructure for municipal, high-speed internet is there. Yes Time Warner is upgrading their service and Google Fiber may some day be a reality. But we have municipal pipe under our city that can connect many libraries, schools and homes to some of the fastest internet speeds around, leveling the playing field for those individuals on slower connections.

“I would be the voice on City Council for SAABN. It is imperative we move forward on this for District 2, because our schools and our libraries will benefit the most from this technology,” Toney wrote on Reddit. “SAABN is going to bridge the digital divide that exists in lower economic households. This is imperative for upward mobility and the future of education in our city.”

Negotiations with the Police and Fire Unions

Toney took a very careful stance on the acrimonious negotiations occurring between the city and the police and fire unions, calling for both sides to engage each other while toning down the negativity.

“Both sides tamp down the negative public rhetoric and come to the table ready to negotiate in good faith,” Toney said on Reddit. “I know the current public safety ‘package’ is unsustainable. While we respect our public servants, they must realize the city’s AAA municipal bond rating cannot be threatened under any circumstances. Likewise, the City Manager needs to be more flexible in her negotiating stance.”

Toney was an appointment of Mayor Ivy Taylor when she replaced Mayor Castro. But while Mayor Taylor was on record for voting against the NDO (the ordinance preventing discrimination based on sexual orientation), Toney differs from the Mayor by stating on Reddit, “Discrimination is never acceptable.”

The Availability of a Northeast Office

This may be a very small thing, but when Toney was appointed to be Councilman, he maintained a field office on the Northeast side off of Rittiman Road to serve my part of the district. When Councilman Warrick was elected in the runoff, the office was shuttered without notice. I called and called, but never got a response. It was only after contacting his main office that I learned that it was closed. Upon my recommendation, notice was placed on Councilman Warrick’s website that the office was closed and has yet to be reopened.

The Call To Vote

I would encourage my fellow citizens in District 2 to vote for Keith Toney. While I would have seen Toney have a stronger presence on social media while campaigning, I feel that his willingness to engage in an open dialogue on Reddit was important. Every politician has his/her flaws, but at the heart it appears to me that Toney will take the opportunity to truly drive change in District 2 without using it as a stepping-stone.

So get out there and vote District 2, let your voice be heard! With such a low turn-out, what you do at the polls can make a difference! I look forward to working with future-Councilman Toney on many issues that affect my neighborhood.