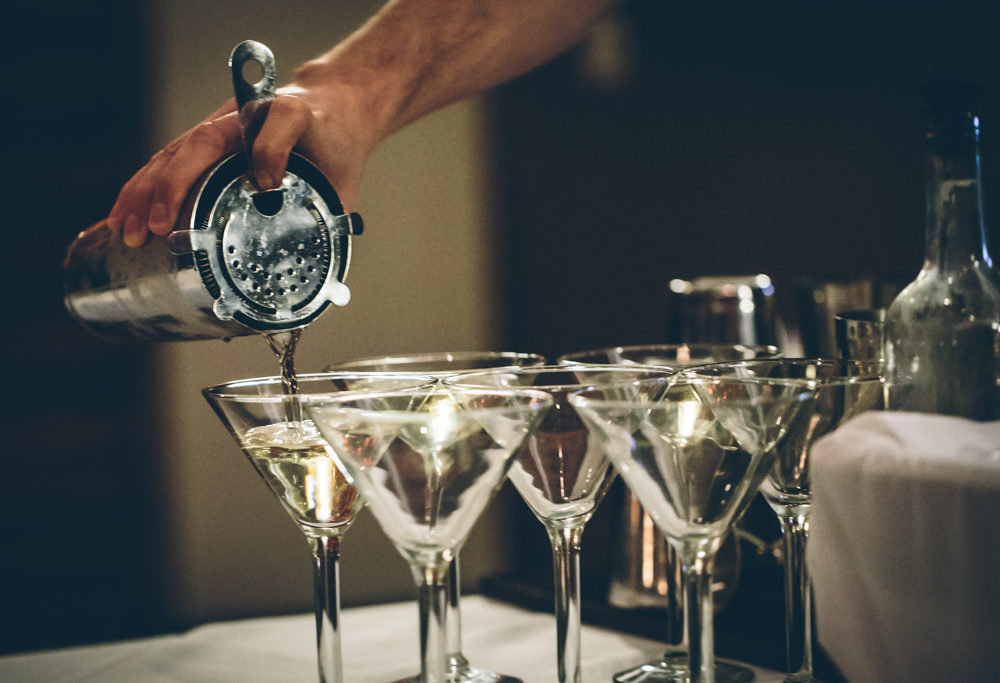 Even though the opening party is still a week away, the 2015 San Antonio Cocktail Conference has got off to an outstanding start. On Monday, Ruth’s Chris and Roca Patrón kicked off the Cocktail Conference’s series of paired dinners with a four-course meal accompanied by cocktails made with the company’s new premium line of tequila.

Roca Patrón is made by the traditional method of mashing the piña with a two-ton rock wheel called a tahona. This distinguishes Roca from their normal line of tequila that uses a 50/50 blend of spirits made with both the tahona and modern production methods. Mike Biviano, the Patrón ambassador, told our small group that the agave flavor is more pronounced in tequilas made with the traditional method because the agave fibers remain in contact with the juice. “It’s very easy to have machines do things in the 21st century, but that’s not how John Paul [DeJoria, the founder] and Patrón wants to do it,” Biviano said.

The evening started with a traditional margarita made with Roca Silver that had all the aspects that I love in a good margarita—tequila, fresh lime juice and a small amount of orange liquor. As a side note, if the city can ban holding cell phones while driving, surely we can get them to outlaw margaritas made with sweet-n-sour mixes.

After mingling a bit—I ran into Eddie and Paula of Dining with Class and Style—we went to the back room. Our bartender of the evening was Andy Hack founder of H&C Ice, the company that provides the perfectly clear ice balls and cubes to many of the craft cocktail bars in the city. As enjoyable as his cocktails were, it was awesome to get to hear Andy talk about the role of ice in drinks as well as hearing some of the local scene news.

Now to the event, I was curious what Ruth’s Chris would be pairing with tequila—would it be a menu full of steak? Turns out the chefs had prepared two dishes that are not typically on the menu. The first course was an Ahi Tuna with a papaya, cabbage slaw paired with a Roca Reposado based cocktail that combined the tequila with pear liquor, Tito Pepe Sherry and Patrón Citronge. The lightly flavored cocktail highlighted the tequila and paired well with the fish.

The next course was carnitas served on an arepa corn cake, topped with cotija cheese and a dollop of guacamole. It was served with a margarita that was made with Meyer lemons that Andy’s-mother’s-friend gave him from her backyard rather than limes—talk about staying local. Surprisingly, this was my favorite combination of the night—the slight saltiness of the carnitas paired well with the sweet margarita. The lemon juice through my taste buds for a loop—it’s like when you think you’re drinking a Coke but grab a Dr. Pepper—but I found that I loved the different citrus taste. The “lemon margarita” just may be my 2015 summer drink.

For the third course, we had a 6-ounce fillet that was accompanied with a tequila Old Fashioned. I know what you’re thinking, “Garrett, aren’t Old Fashioneds supposed to be made with bourbon?” In fact, the actual definition of an Old Fashioned is that it must be made with water (typically in the form of ice), sugar, bitters, sour (the orange that often accompanies it) and booze—if you don’t believe me, check out this article about the history of Old Fashioneds.

The tequila of choice was the Roca Añejo, a spirit that must be aged in a barrel between one and three years. This cocktail wasn’t the only thing that would warm you up—it went nicely with the steak that was cooked in a 1,800 degree broiler and served on a 500 degree plate.

Finally, for dessert we had a selection of biscotti and shortbread dipped in chocolate ganache with a side of berries. This was served with a cocktail that was a blend of Patrón XO and horchata that capped off the evening on a sweet note.

This week’s group of paired dinners are incredibly intimate—there were only ten people at our dinner—which can be intimidating for some. But a curious thing happens as you progress through the meal (and cocktails): the volume of the room rises and you make some fast friends (like Lorie, Brian, Freddie, Joy, Eddie and Paula). It’s also nice to get a chance to pepper the spirit ambassador with a lot of questions about both their brand and the spirit in general.

Check out the schedule to see what other events are still available and get your tickets now. Not only will you have a fantastic meal and cocktails, you’ll also be doing a lot of good—the money raised during the Cocktail Conference goes to support four local children’s charities.