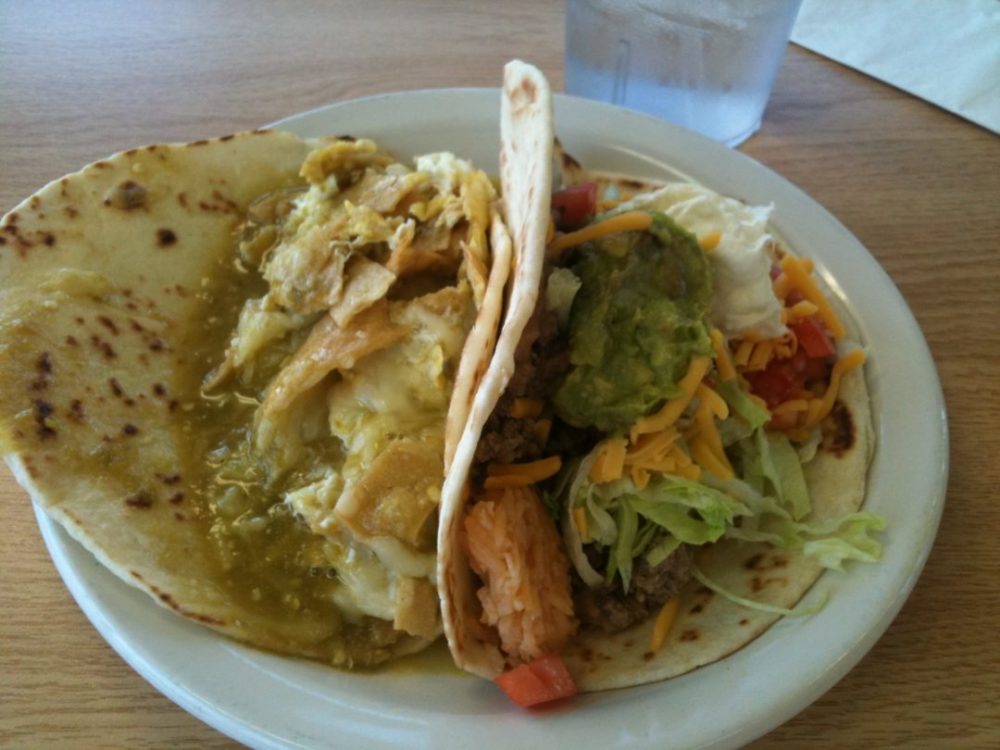 One day while I was ramblin’ around town, I stumbled upon Ruthie’s. This was one of those days where I was just driving around town on back roads to get to a place instead of staying on the major thoroughfares. I saw this huge yellow building with a sign that beckoned me to “Eat Here.”  Since I had just eaten, I filed this stop away in my mind as a place to return.

Fast forward to where I had to be at a going away party for a friend at the Lion and the Rose on Blanco. I hadn’t eaten all day and I was like, bam, Ruthie’s. I made my way to the yellow building to see what they were all about.

Strangely enough, this was about 4:00PM, but for whatever reason I had a hankering for some breakfast (if you have followed the blog you know that sometimes I want some odd food combinations…). I asked the waitress if they still served breakfast and she said that they did so I was pretty pumped. I was looking at some of the plates but just felt like some tacos. I ended up ordering the chilaquile taco to satisfy my breakfast urge and the supreme taco to see what they were all about. Total for both tacos was only like $4 in spite of the fact that the supreme taco had sour cream and guacamole.

The food was out shortly (have to admit, I was surprised they could turn a breakfast order that fast at 4:00PM!) and the plate was enormous! I just couldn’t believe how much food they were able to cram on these tacos!

The chilaquile taco was dang good; it wasn’t like the chilaquiles that I order at Lula’s or Thousand Oaks. It has a really rich almost buttery flavor to it. I asked for some of the green sauce and that spice went really well with taco. I knew I was going to get full and not touch the other taco if I didn’t put the chilaquile one down at the halfway mark, but I kept coming back to it as it was that addictive!

The supreme taco certainly lived up to the name. In addition to being huge, it had all that add on stuff like sour cream and guacamole that most places will charge you a buck fifty (I’m talking to you Chipotle!), or almost as much as the whole taco costs at Ruthie’s! It was pretty good itself, but I have to admit, I didn’t really eat a whole lot of it so that I could go back to the other taco…

I should say that I went in starving; I hadn’t eaten all day and devoured the chips and salsa quick (the waitress asked if she could bring me more, and I told her “No” so I could save room for the tacos), but I could only clear out probably 2/3 of these two tacos!

A final note should be made on the tortillas; they were some of the thickest I have come across in San Antonio (no, I have not been to Blanco Cafe, it’s on the list (I know, I know…))), and man, they were pretty good!

If you are on a budget or have lots of mouths to feed, drop by Ruthie’s and just order one taco, that is all you are going to need!

Value: 10/10 (Two giant tacos for $4 and I couldn’t even eat both of them, amazing! Plus get guacamole and sour cream without paying extra on the supreme taco)
Atmosphere: 8/10 (hole in wall but clean; go to the section further away from the door for better A/C)
Service: 9/10 (no frills but really nice)
Salsa: 9/10 (good tasting, would have liked the green to be a little hotter)
Taste: 10/10 (chilaquile taco was more addicting than fantasy football)