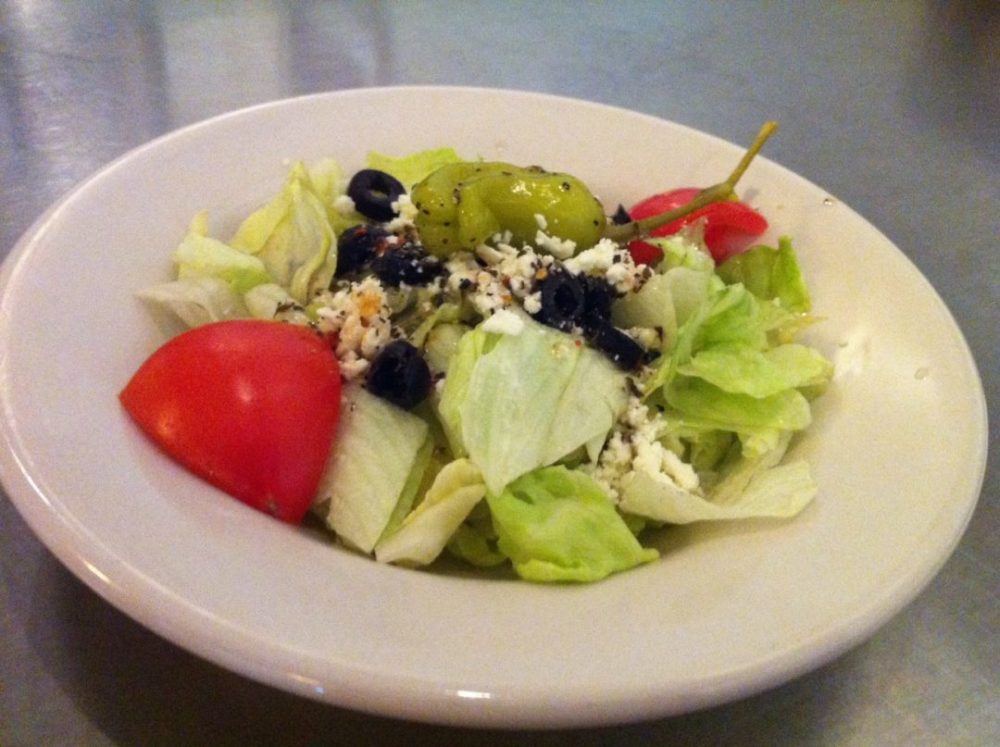 Having won several awards from the newspaper and often lauded as one of the better pizzas in the city, Rome’s Pizza has been serving the Alamo City since 1986.  They have four San Antonio locations that canvas the Northside with most recently opening one in Stone Oak.

Having eaten at Rome’s in the past, I decided to take advice from some of my readers who left comments on a previous post that encouraged me to get out of my pepperoni comfort zone and try something more exotic.  I was glad that I did.

The restaurant has a classic pizzeria feel that is open with red and white checkered floors that I really love.  There are tons of different pieces of Italian ephemera that add to the environment.  It has a nice feel that accommodates larger groups (one time I ate there with a big group after we had helped move a friend).  The only thing about the atmosphere that didn’t work for me was that there was a sitcom on the television with the volume loud enough to be a distraction but soft enough to not make out the words.

I started with their Greek salad, which is one of my favorite salads in town.  They have a good amount of feta cheese mixed with red pepper that compliments the oil and vinegar dressing.  The tomatoes were super red and looked liked they were fresh picked.

I split a couple of personal pizzas with my girlfriend so that we could try two of their more exotic creations.  We ordered The Sauté, which was one of their white pizza selections alongside the Rome’s Deluxe pizza.  While I decided to get out of my comfort zone with The Sauté, I wanted to make sure that I had something more grounded to what I was used to with the Rome’s Deluxe.

Upon seeing the white pizza, I was glad that I decided to try something new.  The Sauté is made with mozzarella and Parmesan sauce and is toped with caramelized peppers and onions.  This alone would have made for a good pizza, but what kicked it up was that it had chunks of bacon on it.  Not like the soggy bacon, but the crispy bacon that had the right amount of gristle to make it salty when you bit in.  Delicious.

The Rome’s Deluxe came with Italian sausage, pepperoni, mushrooms, red onions, and I subbed in jalapeños for the green bell peppers.  The sauce was pretty solid and I really enjoyed the crust – it was soft but had that crunch right around it.

Yes, Rome’s can do a the typical pepperoni pizza well.  However, go out on a limb and try something different.  You’ll sure be glad you did.

Taste: Their specialty pizzas were really solid; thanks to all you guys who commented on the previous blog article who suggested that I get out of my comfort zone and try something more exotic.
Value: Dinner prices are more than you would pay at a chain pizzeria ($18 for a large specialty pizza); if you are really value conscience, check them out for their lunch specials to make your dollar go farther.
Atmosphere: Love the red and white checkered floor and the random things on the wall; the TV playing the sitcom just loud enough to be distracting was my only complaint.
Service: Straight to the point; the bus boy was on it getting our plates removed when we finished the salad.

Juice in the City, a popular daily deal site for parents with kids in the “juice box” phase of life, reached out to me to see if I would stop by and grab some grub.  They sponsored the following meal that I reviewed. Get $20 worth of Rome’s Pizza for $10 (newest location at Stone Oak only)! You can purchase this deal from Juice in the City through July 4th.